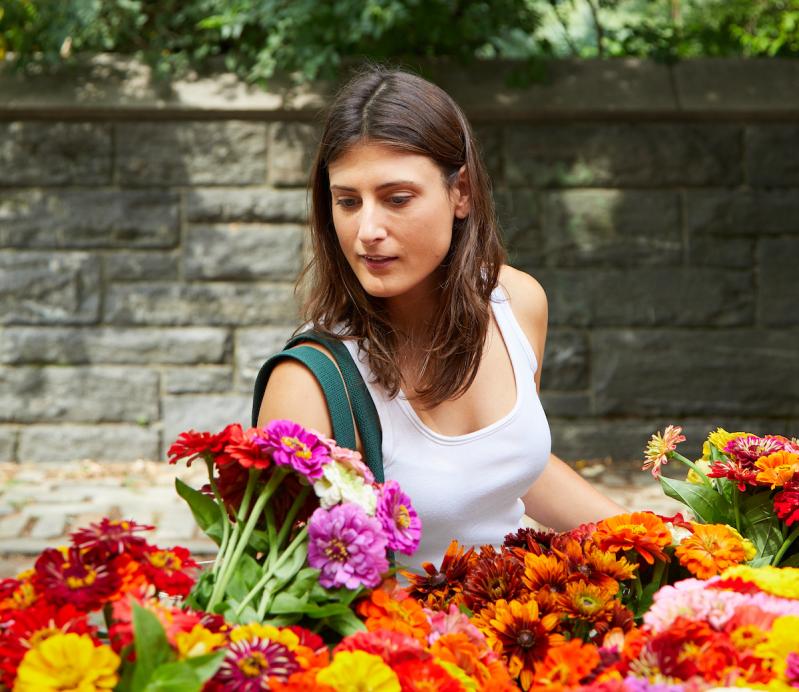 Jess Damuck is the author of the cookbook Salad Freak: Salads for Every Meal.
Linda Pugliese
By Stacy Dermont

Jess Damuck is making waves coast-to-coast as a food and prop stylist, producer, writer, and self-proclaimed “salad freak.” In fact, Salad Freak is the title of this Ross School alumna’s first cookbook from Abrams: Salad Freak, Salads for Every Meal.

We eat with our eyes first, and this gorgeous tome with photography by Linda Pugliese is very filling. It features 100 simple recipes divided into the four seasons. “Produce is meant to be enjoyed at its peak,” says Damuck. These salads are hearty enough to serve as meals, but flexible — so they could be incorporated into a larger menu.

“The summer is such a magical time on the East End!” Damuck says enthusiastically over the phone from Los Angeles. “Tomatoes are what summer is all about to me and I always looked forward to corn while growing up — there’s nothing better.”

The book reads like your B.F.F.F.F. (Best Freaky Foodie Friend Forever) wrote it — someone informed and assured, with the ease of a pro who allows room for self-effacing humor. A friend who accidentally orders two whole pounds of black garlic online “after eating a weed gummy.”

The recipes’ ingredients are handily divided into categories, so you know what you might need to shop for and what you probably already have on hand: “Produce,” “Dairy, “Pantry,” etc.

Is East Hampton’s Martha Stewart also a salad freak? Stewart, credited with writing 99 books of her own, to date, penned the foreword to this new cookbook. In it, she writes, “Damuck’s first book is a pure joy to look at, to read, and to cook from.”
Damuck, in fact, began her career as an intern with Stewart while studying at the French Culinary Institute. Tasked with preparing the media mogul’s lunch, she naturally leaned into salads. “Salads have always been my favorite thing to prepare and the dish I look forward to eating the most,” Damuck writes.

Damuck prepared Zucchini Ribbons with Pecorino, Mint, and Almonds (page 194) for Stewart, only to be warned by staffers that Stewart “wouldn’t like the raw zucchini, that she didn’t like wet things.” But Damuck’s salad passed the Martha Test. (Note, however, that Stewart did point out that she doesn’t usually like both nuts and cheese in her salads.)

Raised on Shelter Island, Damuck went on to prepare numerous “three-hour salads” for Stewart. That’s how long these piles of perfectionism took to bring together, from sourcing at the farmers markets and fishmongers to the scrunching and swooping of plating.

But in Salad Freak, most of the dishes are quick and easy to assemble. She’s learned a few tricks, and Damuck is out to make everyone a salad freak. “A big goal with the book was to offer something for everyone,” she says. “I have a few friends who basically don’t eat fruit or vegetables, but they found things to like in it,” she continues. “You’ll never get bored with so many combinations, textures; with food there are so many different things happening.”

RELATED: Check out the best salads of summer 2022 from "Salad Freak"

Damuck has worked with Stewart for over a decade now as a food editor and stylist, and has worked on Stewart productions including the Emmy-nominated Martha and Snoop’s Potluck Dinner Party. She also guest-starred with Stewart on an episode of  the HBO comedy High Maintenance, starring Damuck’s partner, Ben Sinclair. Her face may be familiar to you. Maybe you’ve seen while she’s been visiting back home on the Rock.

“Eating is hyper-local on Shelter Island,” says Damuck. “When I was growing up, our neighbor was a commercial fisherman, so we could just knock on his back door when we wanted seafood or scallops!” Commander Cody’s remains one her favorite places to dine out. And Marie Eiffel Market is her go-to for grabbing a quick picnic spread to take to Menhaden Lane Beach.

Damuck credits the Ross School’s longtime connection with Quail Hill Farm for a food program that fostered an interest in eating seasonally and sustainably. “I learned how much better things taste when they’re truly in season and what a huge difference a well-balanced, nutritious diet can have on your whole life!,” she says.

Though seafood, meat, and dairy feature in many of the recipes, this cookbook is very much on-trend and plant-forward. It’s about how we want to eat now—simple, delicious, healthy, colorful. And that means seasonal. Damuck focuses on citrus in her winter section, when this fruit crop peaks down South.

Many of Damuck’s styling tips are practical, not just for would-be Instagram stars. Making food look more appealing makes it taste better. And there’s a welcome element of mindfulness in Damuck’s recipes. A stringing together of Zen moments in the gathering, washing, mixing, and arranging that weaves a fine cloth.

“Being immersed in nature makes food that much better,” she says.

A surfer, Damuck waxes nostalgic for days when she packed something to go to beaches in Southampton, Amagansett, or Montauk.

Damuck is currently at work on a book about entertaining, with her friend Benny Blanco, a record executive. She lives and works bicoastally, in New York and Los Angeles. Damuck has developed and styled content for Bon Appétit, Apartment Therapy, the Food Network and Eater. She’s currently styling for Chrissy Teigen’s cooking website, Cravings, when she’s not out promoting Salad Freak, or cooking at home.

She marvels at the longevity of Stewart’s career and her insatiable curiosity. “She’s made such a beautiful life,” says Damuck, who is quick to point out, “I really do love Ina, too!” (Referring to East Hampton’s other food mogul, Ina Garten.)

Damuck freely admits her definition of salad is “pretty loose.” For example, her Crispy Calamari with Carrots, Frisée, and Ginger (page 230) — a dish was inspired by meals she’s enjoyed at East End restaurants — is basically graham-cracker battered calamari on a bed of the aforementioned vegetables with a vinaigrette. But doesn’t it sound delicious?