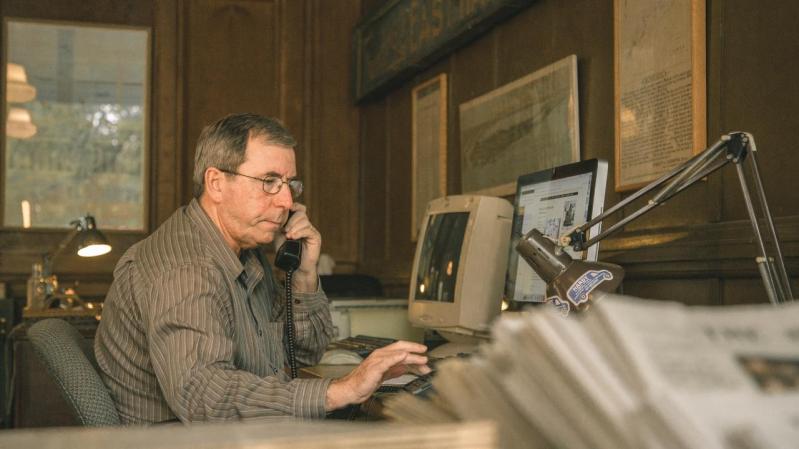 Russell Bennett at his desk.
Tycho Burwell
By Cornelia Channing

East Hampton Village, 8:30 A.M. — Patricia ‘Pat’ Ryan makes her way down Dayton Lane, gently tugging on the thin red leash of her 14-year-old Cocker Spaniel, Lucy, who trots happily beside her. It’s a bright June morning and she is on her way to pick up a copy of The East Hampton Star, as he has every Thursday for almost fifty years.

“She’s almost always the first one here,” says Russell Bennett, the Star’s classified advertising manager, who mans the front desk in The Star office at 153 Main Street. The front room of the office— which was once, many years ago, a drug store—has a cozy, old-timey feel. Large plate-glass windows bearing the paper's name in gold lettering flood the room with morning light. Inside, beneath a large mirror, several desks are stacked haphazardly with piles of paper, coffee mugs, and pens. In one corner, a cluster of typewriters just barely hides behind few potted orchids, giving away the newspaper's age. Archie, a Jack Russell Terrier and The Star's resident pup, snoozes in a patch of sunlight on the tiled floor. This is the room where, for the last 134 years, readers have come to chat with Star staff and pick up the weekly paper (payable by dropping a $1 bill into the small wicker basket on Russell's desk).

At a time when the news can feel overwhelming and dark, such analog rituals distinguish The Star as both anachronistic and uncommonly warm. The brick-and-mortar storefront of The Star — shingles and glass, mostly — offers readers a physical place to bring their questions, opinions, and grievances amid an increasingly digital, and unresponsive, media landscape. Concerned citizens walk through the door and find a place where they can have their questions answered, or at least listened to with a patient nod.

If you add up their years in service, Russell and his colleagues Min Spear and Jane Behan Bimson, have collectively been sitting in the front room of The Star for over 100 years. Over that time, they have been the paper's primary point of interface with the public and have witnessed how the community’s relationship to the paper has changed. “There used to be a line out the door at 8:30 a.m.,” recalls Russell. “We had the paper before any of the coffee shops in town.” That was back before the internet, when the print paper was the only way to find out what was going on in town (aside, of course, from Hugh King, East Hampton's official Town Crier). Russell has been the main gatekeeper of the front room since 1989 and remembers, in the years before Google and Yelp, when it was common to receive calls asking for recommendations or basic information. Is there a lifeguard at Indian Wells today? Or What time is the movie at Guild Hall tonight? For it’s first hundred years, The Star (founded in 1885) was a kind of operator, directing informational traffic throughout the East End; for some residents, it still is.

Office lore includes the time that Chevy Chase came in to use the bathroom, and another time when a rather kooky individual walked in dressed in head-to-toe Civil War reenactment regalia. Russell struck up something of a friendship with a reader who came in regularly to complain about the paper: At one point, she stood squarely on the tile floor of the front office and read aloud a five-page letter, addressed to Russell, about his personal shortcomings.The front-office staff discuss these incidents with a not imperceptible relish. Russell, tellingly, keeps a framed photo of the letter reader on his desk. 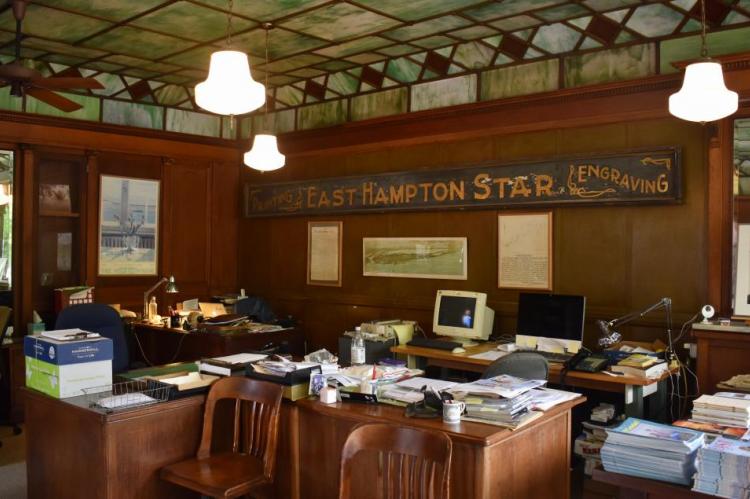 The Star’s open-door policy is partially a byproduct of the office’s central location —an old building on Main Street between the East Hampton Library and the bustling business district — but it also reflects the paper’s history and longstanding commitment to transparency. Since its launch in 1885, The Star has a tradition of maintaining open lines of communication with its readers, including an unusual policy which mandates that all letters to the editor be published in full (unless libelous, previously published elsewhere). It’s common to see editorials bemoaning “the death of the small town paper,” but the front office of The Star provides a heartening example of a community meeting place where the pulse of print journalism still beats strong.

Hang around The Star office on a weekday morning and you will get a pretty good sense of what is going on in town. 9 A.M.: Woman comes in asking about a local man who recently passed away. Why wasn’t there an obituary? 10:30: Library historian brings over copies of 18th-century documents for an archival project. 11:15 A.M.: Man stops in to pick up the hat he won as part of a photo-identification contest. 1 P.M. The photographer Doug Kuntz, notepad in hand, recounts the details of an early-morning accident in which a car failed to make the turn at the stoplight on Woods Lane; it drove straight into Town Pond; no injuries.

At moments, there is an almost Wes Anderson–level cuteness about The Star office, if only because, today, such scenes of small-town drama are so rare as to seem charmingly novel, the stuff of movies. “After all,” Russell says, “where else in the world can you walk into town and have a conversation with the people who produce your news?”

This open dialogue benefits The Star, as well. “People bring us things — photos, rumors, tips,” says David Rattray, the editor. “A lot of news organizations spend time and energy trying to assess how readers are responding to the coverage, and that is just not something we have to do. If people in town don’t agree with something we wrote, I am going to hear about it the next day at Java Nation, or someone will just come give me a piece of their mind.”

Reader responses can range in tone from adulatory to critical to downright enraged. “I would say about half the time people come in, they are pissed off about something,” David says. “You should hear some of the people who come into my office.” He laughs. “When they ask you to step outside, that’s when you know it’s going to get ugly.”

“We don’t necessarily respond to most of the feedback we get, but it is valuable to have the information. It is a way of taking a general temperature and keeping abreast of how our coverage is affecting people over time. Accountability. It reminds us that we are dealing with real people and real lives.” 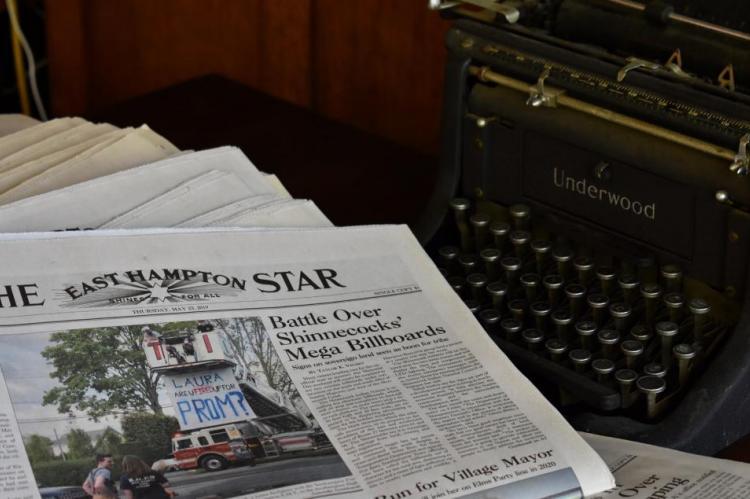 While David takes these reader criticisms seriously, he has a lighthearted air when discussing some of the more outlandish forms of criticism that the Star’s open-door policy admits. Last year, after receiving a particularly angry voicemail from a reader accusing the paper of bias, David posted a recording of the message on the website with a caption: Warning, if it says OP-ED, chances are it might be biased!

Every once in a while, the paper experiences kinds of contact that are not quite so benign. Several years ago, the windows were smashed with bricks. Just a few weeks ago, a man barged through the front door, angry and incoherent, leveling threats at the newspaper and those sitting in nearest line of fire. He had his hand in his pocket, as if holding something heavy, like a gun.

“The whole ordeal was pretty terrifying,” David says. “I stayed in the back until it was clear there was no gun. I got to use the old peephole.”

Smiling sneakily, David strolls over to a built-in bookshelf in the back of the room and points to a place at eye-level. Sure enough, at the back of the cabinet, above a shelf containing some sepia-tone postcards and a few old glass bottles from the days when the building was a pharmacy, there is a quarter-size hole cut through the pine, through which you can see the back office. A peephole.

“I don’t know when it was put in,” David says, “but it was there when I was a kid. I always imagined it was there in case someone tried to rob the place. This was the first time I ever really made use of it.”

David called the East Hampton Village Police, who escorted the threatening man from the building.

Such encounters are a chilling reminder of the age we are living in, when journalists around the world are under attack and phrases like “enemy of the people” are thrown around by those in power. Given all this, the transparency practiced at The Star can be seen as more than just endearing  — it’s actually quite radical. And risky. Unlike large urban newspapers, which operate high in office buildings surrounded by security and concrete bollards, there is simply no filter between The Star staff and the unpredictable public. Russell, Min, and Jane are the first line of defense.

Crickets and puzzled looks are the response when the staff are asked if The Star has ever considered amending its open-door policy. Russell gestures toward the large plate-glass windows with a shrug that seems to say, Can we ask the sun not to rise? “We are the local newspaper,” he says. “It can get a little scary sometimes, but it’s all part of the job.”

Adds David, “I can’t imagine running  a successful community newspaper if you are hidden away on the second floor of some strip mall somewhere. I just don’t know how it would work.”

Indeed, many readers of The Star do feel a sense of ownership over the paper that is, no doubt, related to its participation in town life. It is the community paper, their paper. The Star is easily the most widely read publication on the East End, reaching 13,000 households. The Star reaches about 51 percent of people in town, a metric that is — proportionally speaking — two and a half times the reach of The New York Times and more than three times that of Newsday. Such is some residents’ attachment to the weekly rag that, even after they have moved away to far-flung corners of the globe, a resolute few maintain their subscriptions, paying the postage to have issues mailed to Hong Kong, London, or Morocco.

Several things about The Star appeal to readers' nostalgia—throwbacks to a supposedly simpler time in our nation’s history. The paper is still 100 percent family owned, still an old-fashioned broadsheet in format, and still costs only $1 (or less, with a subscription) per issue. In other words, it is exactly the kind of newspaper that is disappearing all across the country — but it is still here. Its door is still open.

On a sunny afternoon, a woman stops in to inquire about a contest advertised in that week’s paper. On her way out, she pauses to admire a display of the paper’s 100th-anniversary issue, published in 1985. “My!” she exclaims, “this is an old paper!”

“Yes, indeed,” Russell says, leaning back in his swivel chair. “And don’t we look good for our age?”

The woman laughs. “You look wonderful.”