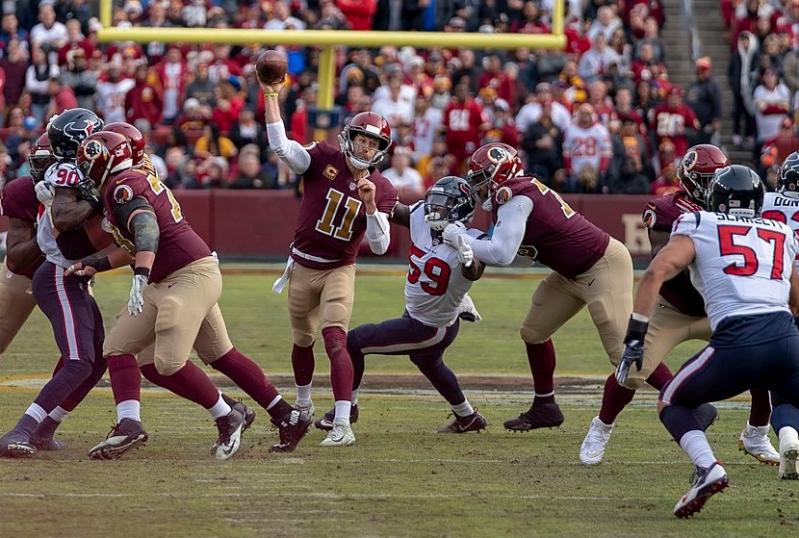 Alex Smith in the Nov. 18, 2018, game in which a leg injury nearly ended his career. He didn't play again until October of 2020.
Keith Allison / Wikimedia Commons
By Baylis Greene

Cable-less, I broke down and signed on for a streaming service solely so I could watch the playoffs and Super Bowl, which, after all, has practically become an extension of the holidays for the average American.

I was just in time to catch Sunday’s late-afternoon game, in which a fair-haired backup undrafted out of Wake Forest, John Wolford, not all that long after begging off a career as a private equity analyst, led the L.A. Rams into the playoffs, the first time a quarterback in his first start had done so in the last game of the season.

That’s the kind of drama — unexpected, unpredictable, pressurized — that keeps people like me coming back for more, regardless of the clearly unproductive expenditure of time. The guy threw an interception on his first pass, close to his own end zone, no less, and you were looking at a looming, depressing disaster. But Wolford got a pat on the helmet, teammates checked in on him on the bench — “We’re good,” the camera caught him insisting — and he turned it around, with his arm as well as his legs (56 yards rushing), earning a hug from the coach afterward.

Footballers say that’s what they miss the most when their playing days are over: the camaraderie. You’re sure not going to get it at the office.

But when I ask for forgiveness above, it has to do with the gladiatorial nature of the sport, the troubling concussions, for sure, but even more so the gruesome injuries that leave the viewer feeling a bit like Madame Defarge — a spectator at the guillotine.

Take Washington’s Alex Smith, speaking of quarterback dramas. He’ll also be in the playoffs after winning on Sunday, two years removed from a hair-raising compound fracture of his right tibia and fibula and 17 subsequent surgeries. Who doesn’t like a good comeback story?

What’s irresistible is the comfort the ultimate TV game offers, the familiarity in uncertain times, the sameness overlaying unknowable outcomes. Simply having it on in the background.

Dan Wakefield — Hoosier, friend of Vonnegut, creator of the innovative “James at 15” series for NBC in the late ’70s — put it well in his 1985 book “Selling Out,” one of the better novelistic critiques of Hollywood, referring to his obviously autobiographical protagonist as “harmlessly habituated” to “Monday Night Football.”

The line has stuck with me all these years. Just like the game.