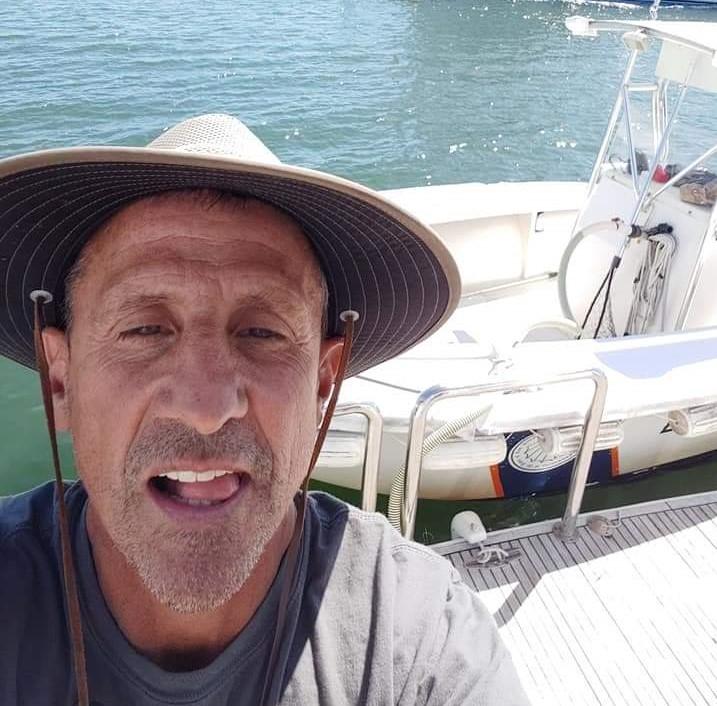 The timing was right when my friend called and informed me the town was looking for a  licensed captain with experience in running a 23-foot center-console outboard. He said the job was right up my alley, having recently failed as a Groupon charter captain. (By the way, whoever wrote that book “Do What You Love, the Money Will Follow” should be lashed with a stick.)

Sure, I needed money, but this was bigger than that. I’d spent most of my adult life trying to insinuate myself in glamorous or cool careers that I was remarkably unqualified for. While I had pockets of success and some nice paydays, including my book being published and then turned into a movie that aired on HBO, these successes never blossomed into full careers. So, with the help of various 12-step programs (I was on my knees a lot, praying) and a therapist, I was focusing on the importance of humility, of becoming a worker among workers, and the fact that all jobs, no matter how menial, had dignity.

My goal was simple: an honest day’s work for an honest day’s pay. Not asking the specifics of the boat job, I said sure. My friend gave me the contact at the town trustees’ office.

I wondered what the job of running a town boat would entail. Would I be checking mooring numbers and boat registrations, or perhaps supervising sailing regattas? Maybe it would be a launch boat in which I would shuttle trustees and board members to survey bulkheads that were in violation of zoning codes. I mean, how hard could it be?

As I was entertaining these pleasant images of my new career on the water, my good-natured but gruff commercial fisherman friend called back.

“By the way, when you call the trustees’ office, the boat you are applying to run is called the pumpout boat. You will be removing septic from large yachts, transporting it, and discarding it into a 10,000-gallon holding tank near the Coast Guard station. Hard work, but great tips.”

I sat there, despondent. Did he just say “septic”? Reality was slowly sinking in. My friend was suggesting I apply for a job running a septic barge in Montauk Harbor.

Like most of us who live on the East End, I was acquainted with the dire septic issues facing our waters. How could you not be? Just about every other day, Channel 12 news has a report on dangerous algal blooms, high levels of nitrogen, and toxic brown tides. I had heard about city beaches being closed due to septic/fecal runoff after storms, and wasn’t it Havens Beach in Sag Harbor that was closed because of high nitrogen counts in the water?

The definition of septic is toxic and dangerous. In short, shit is nothing to play around with. The coronavirus has nothing on raw septic: I learned in training that if handled without gloves it can lead to hepatitis, typhoid fever, cholera, norovirus, polio, E. coli or giardia infection, tapeworms, rotavirus, etc.

So I got it: Removing septic from Montauk Harbor (or any waterway) was an important and even an admirable job. But even though I desperately needed work, could I pump crap for 40 hours a week? When I moved out to Montauk my goal was to become a famous fisherman. I envisioned crowds of people waiting at the dock straining their necks to get a peek at my customers’ trophy catches as I confidently backed my boat into the slip.

I did not want to be the pumpout guy!

When I told my girlfriend about the gig, she was surprisingly supportive: “Look, it’s a great chance to work outdoors on the water.” I rebutted, “I love the Grand Canyon too, but don’t want to scrub porta-potties in the visitors’ parking lot for 40 hours a week.”

I called my friend to register my apprehension and tell him I did not think the job was for me. He patiently absorbed my concerns and then went on to rattle off a list of my pumpout boat predecessors, all of them far more qualified than me. One guy, “Sid,” who had done the job for 17 years but has since moved away, was a retired decorated Navy man and a real gentleman. The harbor operator I would be training and working under had the most impressive background of all. He had served in the Coast Guard for four years, for decades he ran commercial fishing boats all over the world, and then he operated one of the nicest private yachts in Montauk. He was also a skilled diesel mechanic and boat builder.

When I reported for training, I found there was a growing need for the pumpout boat as the hamlet slowly, some feel sadly, transforms from a sleepy working-class fishing villa and family beach town to a high-end party destination. Montauk Harbor is getting fewer fishing boats and family cruisers, and more and more huge, garish, plastic mega yachts that one would expect to see anchored off the coast of Mykonos in the Greek isles with the cast of “Jersey Shore” dancing off the bow and doing shots of Jagermeister.

Some marinas tried to add more bathrooms to accommodate the influx of people, but did not meet the zoning requirements, or something. So people relied heavily on the heads on the yachts — point being, there was a growing need for septic removal via the pumpout boat. Without it, these boats, as they rarely left the harbor, would, once full, certainly dump their waste in it.

Let me quantify this with hard numbers: Last year we pumped out an estimated 75,000 gallons of raw, untreated septic, or, as I like to call it, Brown Gold.

Before I took the job as a pumpout operator, I thought it would be a sanitary operation — I mean, it was 2019, wasn’t it? I learned in training that after you tie the pumpout boat, you pass a hose up to a crew member on the yacht with the correct fitting secured to the end of the hose. After about 20 minutes, he hands it back and off you go to the next boat, till you reach 400 gallons. Then you go unload that at the secured holding tank near the Coast Guard station. The sewage is in an airtight compartment — no leaking or spills.

Well, I was wrong. Yes, in theory, it is a clean operation. The hoses are vacuum-sealed. The operator uses gloves and hand sanitizer, rinses off the hoses, cleans the boat afterward, and tries not to spill a drop — not on the customer’s boat, in the water, or on the pumpout boat.

But as with all boats, “shit happens”: When you think of all the working parts, how could it not? The pump pushes 12 to 15 gallons of septic a minute; that’s a lot of pressure. The pump works hard; the hose chugs and moans and once in a while gets a sort of speed-wobble or gyration and starts to convulse. This is usually caused by paper towels, pantyhose, tampons, or some other debris forced into the head. Too much pressure on a four-inch hose and eventually it will burst, sending a geyser of brown shit exploding out with enough power to knock someone off a horse. Septic is now all over the deck, to the top of your work boots — shoes covered in raw fecal matter; knee deep in it. The pump stops. You steer slowly to the dock and tie up and get busy cleaning.

The entire time driving the pumpout boat the operator is thinking, Once I get done pumping out this boat, I am going to tie this stinkpot up and offer my resignation. Even the great war veteran Sid with his pleasant disposition must have considered this at one point. Just saying screw this job.

It’s a rough job. Forty hours a week you smell septic the entire time. How could it be avoided? This never bothered me, but in July and August it’s very hot, and you can get dehydrated easily. It’s high-paced then, everyone needs you and calls for your services via VHF radio. (Do not give out your phone number!) One guy approached me at the Harvest restaurant, where I was dining with my girlfriend. As he approached our table, I thought he was going to ask me about my movie on HBO, or my book on striped bass, maybe an autograph. Instead he asked me if I could come by around 3 p.m. the next day and pump him out, as his tank was full. The nerve!

People whistle at you and scream across the harbor to get your attention. But most people are mature. They are kind and helpful, they understand the value of the service, they appreciate your efforts. Good people.

It’s the young people, the 18 to 24-year-olds, I imagine can’t handle it. I mean, I’m not sure I could have at that age. They see you pull up, and when they realize the nature of your visit, that one boat and one man are assigned this single task, they go into shock mode.

Sure, the kids are nice enough, they often smile and are exceedingly polite. “Thanks for coming, would you like some water or soda?” But you know behind all that they’re thinking, Look at this poor schlep. How many horrific life decisions, how many bad career turns did it take for this guy to finally end up at this godforsaken job?

And the job is not for everyone — 20 to 40-year-olds probably would be too vain, or self-conscious, or, what am I trying to say? Well, you’re not going to attract too many young ladies operating the pumpout boat. Anyway, you have to be a humble operator, polite, you have to know your station. Gossips and hotheads probably would not last. It is said that level-headed Sid became an intrinsic part of the harbor — makes sense to me.

Still, I remain resolved: The job has dignity.

As last summer progressed, I somehow did not mind when people would toot their horns in the middle of Main Street and yell out, “Hey, it’s the pumpout guy!” Especially when I had a paycheck in my pocket and I knew the harbor was that much cleaner because of me. As the sign Sid used to proudly display on the front of the boat said, I was number one in the number two business.

Capt. Jeff Nichols is now in his second season on the pumpout boat in Montauk. He lives in Springs.

A Holiday Gift for Surfers and Beach Lovers
Holiday Lights Go On at the Lighthouse Saturday
Covid Vaccine Clinic at St. Luke's
END_OF_DOCUMENT_TOKEN_TO_BE_REPLACED