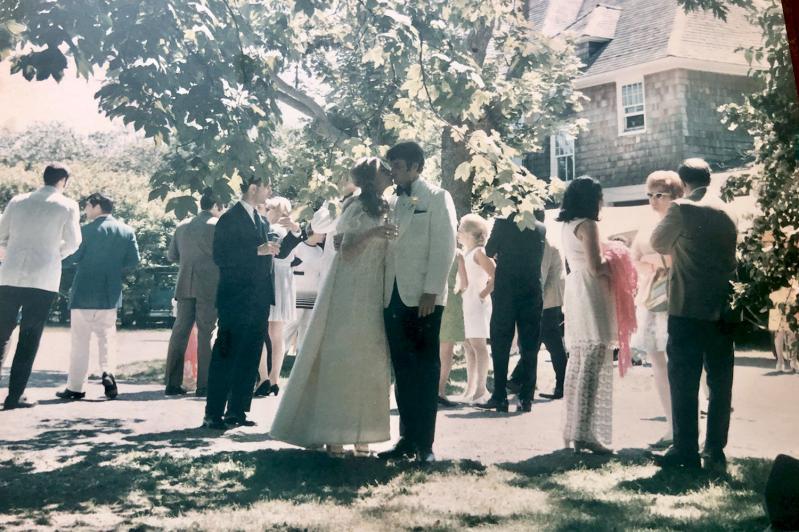 We would have been in Las Vegas this spring, celebrating our golden anniversary by renewing our vows in an Elvis chapel, but due to the coronavirus, flights were canceled, hotels shuttered, and Elvis left the building.

Fifty years ago, on June 28, 1970, my husband, Rick, and I took our vows at the Jewish Center of the Hamptons on Woods Lane. Ours was the first wedding held at the Jewish Center, which 17 Jewish families, including mine, founded in 1959. Their names were a part of the fabric of the East End — people like the Zeldins, Markowitzes, Kouffmans, and Rattiners, all of whom were at our wedding.

Although the synagogue was founded in East Hampton, these charter members came from all of the surrounding towns, including ours, Montauk. It took our combined numbers to convince Jacob Kaplan and Evan Frankel, who supplied the wherewithal to purchase the house and land for the Jewish Center, that we were a viable group.

The Jewish Center looked different then. The Norman Jaffe-designed sanctuary was still 19 years down the road. The ceremony took place where the camp playground is now; there was a remarkable red beech tree that spanned the entire front yard. In the backyard, my family pitched a tent big enough to hold the hundreds of guests who would attend.

The synagogue was, after all, a house. Its modest living room served as a gathering point for those attending Shabbat services; its dining room and kitchen sufficed for a small Oneg Shabbat afterward. The sanctuary was a small room off the lobby. There were two tiny bathrooms, one on the main floor and one upstairs, where the warren of bedrooms that doubled as Sunday school classrooms were.

But we were determined to have our wedding out here.

I had lived in Montauk since 1958, when my family built the Atlantic Terrace Motel on the dunes east of town. It didn’t take long for my husband, who grew up in Westchester County, to embrace the community as I had. He had his first lobster at Trail’s End. He became an avid surfcaster.

There was a certain symmetry to being wed at the Jewish Center, where my dad had been a past president, and my sister the first bat mitzvah. Still, my parents faced the prospect of building a wedding from the ground up in a venue that had never hosted one. Everyone was imported. The caterer came from New Rochelle, the band from somewhere up the Island.

Rick and I had virtually no input, and, in truth, we didn’t really care. Our job was just to show up. My parents planned everything. I still remember the meeting with the caterer, in which I floated the idea of avocados stuffed with crabmeat. Afterward, my mother-in-law took my father aside. “Sol,” she said, “I can’t ask people to drive three hours for an avocado.”

“Don’t worry, Gert,” he reassured her. I actually have almost no recollection of what was served at our wedding. I don’t even remember what our wedding cake looked like, because by the time the photographer took the obligatory pictures of us feeding each other, the top layer had been removed. In the photos, we’re standing in front of four pillars that had held the layer up, which now vaguely resembled the Roman Forum.

Owning a motel comes in handy when virtually all of the guests are coming from out of town. It’s also the reason the wedding was held in June, after my father visibly blanched when we broached the idea of having it in August. “At the height of the season?” he asked, squelching any discussion of such an idea.

So, the wedding was scheduled for Sunday, June 28. That Saturday, rain knocked out both the power and the plumbing at the Jewish Center, leaving us without a working kitchen or bathrooms, and 200 people arriving at 1 p.m. the next day. Fortunately, power was restored and pipes fixed by Sunday morning. It was even sunny.

The band got stuck in traffic on the L.I.E. We held off as long as we could, given that our guests were sitting on folding chairs, baking in the afternoon sun. Finally, someone asked Aunt Fay’s husband, Sam, a musician who fortuitously had his accordion in the car, to play something from “Fiddler.” For whatever reason, Sam chose “If I Were a Rich Man,” and as I passed by my mother-in-law on my way down the aisle, I heard her hiss at her sister: “For God’s sake, Fay, doesn’t he know ‘Sunrise, Sunset’?”

I remember little of what the rabbi said as we stood under the huppah. What I do recall is hearing the band tuning up in the background and thinking, oh, thank God.

Plans go awry. Instead of walking down the aisle to an Elvis impersonator singing “a hunk a hunk of burning love” this spring, surrounded by kids, grandkids, and a couple of holdovers from the original wedding party, we’re in Montauk, self-quarantining. But there is a symmetry to that as well. After all, it is where it all began, and, given the circumstances, that seems just fine.