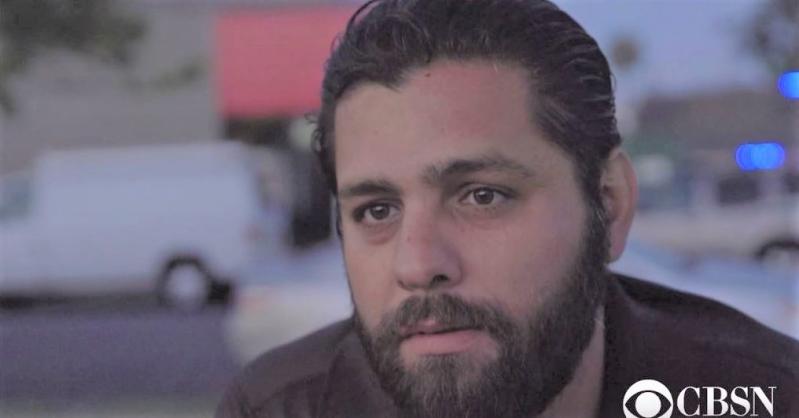 Shahab, from Iran, a carpenter by trade, in San Diego waiting for a citizenship hearing.
CBS News
By Baylis Greene

In the scarcely navigable flood of streaming services and channels, I’ve found a calm eddy of sanity and reflection. CBSN’s “Originals” series of short documentaries, hosted and executive produced by Adam Yamaguchi, once of Al Gore’s Current TV.

If you’ve ever had the sinking feeling, “The Crown” notwithstanding, that good small-screen writing can’t keep up with the demand for content, here’s something television does exceptionally well, maybe because it can be done cheaply — in this case just Yamaguchi and his camera operator roaming free.

I caught one by chance the other day about asylum seekers coming up from Colombia into Panama through the Darien Gap — 60 miles of tangled jungle, steep and rocky climbs, rushing rivers to ford, snakes and jaguars — and there was Yamaguchi, earnestly tagging along. We meet the coyotes with names out of a Samuel Beckett play, Emerson and Augustin, just doing their jobs, “because,” as one of them says, “many have passed through here and not made it.”

They charge $700 to lead people across into Panama, the takers coming from a dizzying array of nations — Bangladesh, Eritrea, India. The travelers use hand signals to communicate through the Babel of languages. Yamaguchi patiently teases out information, changes his soaking-wet socks, sits bored under a tarp in a deluge, and at one point gets choked up, looking off into the distance as he reflects on his personal good fortune in light of those around him trudging on out of sheer desperation, all their worldly possessions in flimsy backpacks.

And then there’s Shahab, an Iranian. He’s on the heavy side; we see him insist that only a smoke can help him get over the next hill. He says he’s been beaten and jailed back home for converting to Christianity. “I got to go,” he says. “I need life. I need more life.”

After he crosses into Panama he has six more borders ahead of him, and at the final one he’s met with six months in a San Diego jail. Then he’s out and the two years’ wait for a court date resumes. The documentary shows him lighting candles and kneeling to pray in an otherwise empty church.

Yamaguchi buys him a roadside dinner of enchiladas and a can of Pepsi. He asks Shahab point blank why the American taxpayer should foot the bill for his presence here and the services he’s received as a detained asylum seeker. Mind you, this guy has nothing, $10 worth of leftover pesos, his cigarettes. He traveled across a continent on foot, not thinking he’d even make it. His answer is the best I’ve ever heard.