One of the many things that struck me on my recent and ongoing sail from Marblehead, Mass., to East Hampton is how accommodating the communities on the other side of the water are to passing boaters, especially as compared to Long Island. It may come down to attitude. New Englanders seemed all-around genuinely friendly to a transient sailor, but in many parts of the East End, a kind of defensive snottiness prevails. Accustomed to people who seem put upon just to say hello, the welcomes startled me several times.

Single-handing down Cape Cod Bay and into Buzzards Bay, I had a lot of time to reflect on why it is that we are so grumpy here. I came to no conclusions. There was plenty of evidence to consider, however. For example, harbormasters’ web presences for Long Island ports of call are law-enforcement focused; in New England, they present a pleasant public face. In Mattapoisett, Mass., the harbormaster’s home page begins with information for “our boating guests.” Here, you get the feeling they would rather have you just move along.

Of course, the Grim Reaper approach is not limited to marine services. The people at the deli where you might get workday lunch 100 times a year act as if they do not know you. And, unless you are a gazillionaire, many people in the trades might not even call you back when you need something done.

It can’t be blamed on the summer influx here, either; in places like Plymouth, Mass., where I holed up for two days during a gale warning and which has massive tourism numbers, the people who sold me bread or fuel or came out to my rented mooring for the night to see how everything was and if I needed a ride in a launch to the shore dock were as pleasant as they would have been if we were family.

Years ago, a summer resident here launched a friendliness campaign, with buttons and posters about being nice. My recollection is that the effort never got too far, which, given the context is no surprise even if there is no good explanation for why not. 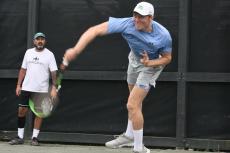