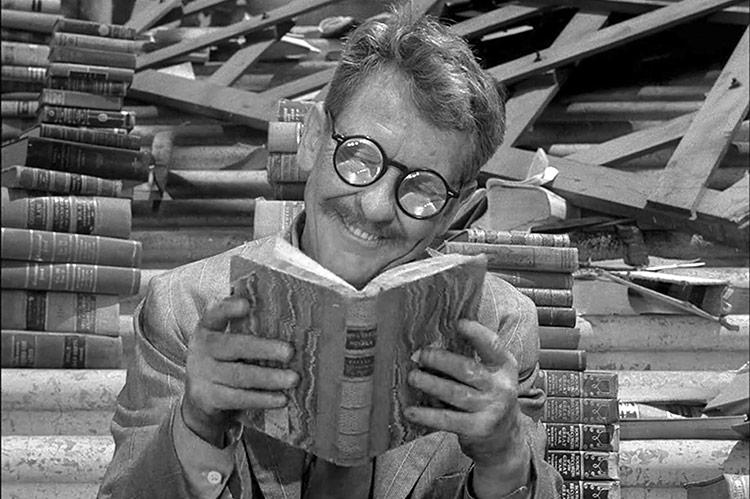 Burgess Meredith as the bookish Henry Bemis, alone after the apocalypse in “Time Enough at Last,” a 1959 episode of “The Twilight Zone.”
By Francis Levy

An expat friend who lives in Saigon asked if I felt like Tolstoy having moved out to East Hampton from New York — in the wake of pandemic. I said that the difference between Tolstoy and me was that Tolstoy didn’t watch CNN.

“The Wealthy Flee Coronavirus. Vacation towns Respond: Stay Away” was the headline of a recent New York Times story. It’s easy to understand the concern. Those who flee to their Yasnaya Polyanas are simply bringing the coronavirus with them. That’s one of the attributes of the current epidemic: It’s hard to escape.

If you were like the Burgess Meredith character in the famous “Twilight Zone” episode about the bank employee who just wants to be left alone to read (“Time Enough at Last”) and gets his wish when he’s the sole survivor of Armageddon, you may have solved the problem. You’d be able to go anywhere without having to worry about other potential carriers, but is such protection worth the cost?

Tracking is a little like a horror movie version of Ancestry.com. You may know someone who had contact with someone who didn’t test positive but had contact with someone who did but was not manifesting any symptoms. Those, in fact, who test positive but don’t display symptoms are like walking time bombs since they’re free to infect a host of people who have no idea what’s hitting them without being the least bit aware of what they’re doing. This may turn out to be one of the primary ways in which the disease spreads.

And that’s the problem with immigration. If you have taken the advice of Deborah Birx, the Trump administration’s coronavirus response coordinator, and quarantined yourself for two weeks once you’ve arrived in the newfound land, then at least you’re sparing the neighbors, but what about the guy or gal down the street who’s so happy to get out of town that he or she can’t wait the two weeks before enjoying their newfound freedom?

Now let’s deal with those who play by the rules and come out to places like East Hampton with enough groceries so that they don’t have to step a foot out of the house for the designated period.

It’s nice to watch all the bikers and runners, many of whom may not have been as assiduous in following the guidelines as you have. Even in your own home, you’re probably as diligent in maintaining social distance as you have always been with your significant other, which may explain why you continue to raise your voice at the dinner table. After a few days of this new regimen, however, you may begin to start wondering what’s going to kill you first, the coronavirus or being in such close proximity for so long.

Stress is a killer and there is no doubt that once you start to inhabit a limited space with another person you look at them through the wrong end of the telescope. All the traits you’ve always hated become magnified in a situation where so much togetherness is required.

Now for the bright side. The first thing that one does under conditions of stress is to look at everything as a potential work of art. You’ll write about it all, and the following summer your play will open at Guild Hall, where it will get picked up by a big-time producer and quickly make it to Broadway. You’ll get a Tony and a movie deal. You’ll end up saying “Thank God for coronavirus” — without which you would never have become a star.

Remember all the cars parked alongside the road, taunting you with the existence of parties for which you hadn’t received a nod? Well, now, as hard as it may be to believe, you’ll find yourself pulling up and handing your keys to a valet. Remember the old Uncle Sam “I Want You” recruitment posters? It may be hard to admit that devastating catastrophes can open doors. You may even find your name on the benefit committee for some research facility, having become a celebrity draw.

Now let’s try to think up titles. “Strange Interlude” and “Waiting for Godot” are already taken, as is “The Snake Pit” and “The Alchemist” (gold into floss, not bad if it weren’t already done), but how about a hip-hop musical made up from one of those big compound German words, Vergangenheitsbewaltigung, for example, which translates as “the burden of the past”? Catchy, huh?

“Vergangenheitsbewaltigung,” the hip-hop musical about sheltering in place. Your misery will be refunded as you reap the profits from the next “Hamilton.” Before you know it, your Uber will be waiting and you’ll be heading back to the city with your supply of hydroxychloroquine in your Prada bag.

Francis Levy is a Wainscott resident and the author of the comic novels “Erotomania: A Romance,” “Seven Days in Rio,” and “Tombstone: Not a Western.” He blogs at TheScreamingPope.com.