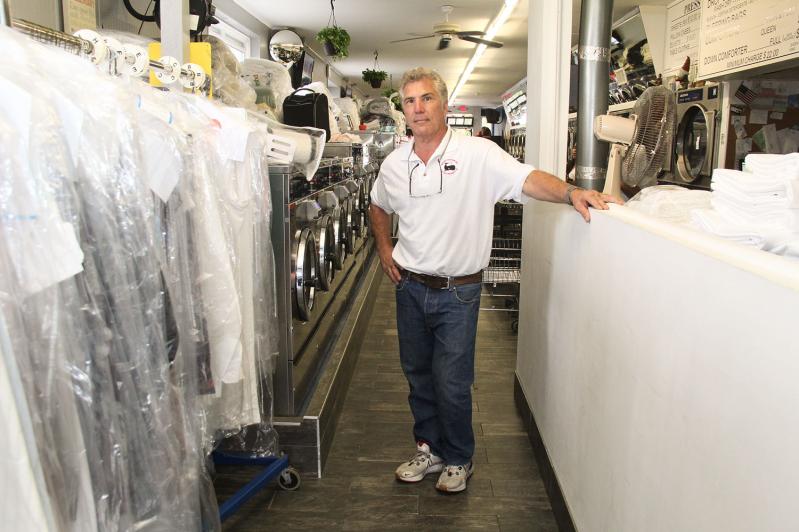 “It’s very interesting over here because we serve all kinds. We’re servicing the docks, the opposite of that, the landscaper and the person that owns the yacht,” said Bill Tabert, the owner of the Sag Harbor Launderette.

Mr. Tabert bought the launderette about five years ago and renovated the entire building, adding all new washers and dryers, and redoing the wiring after a fire between the ground floor and the second story in 2019.

A fixture on Main Street for decades, the place is almost always busy. Open every day from 6 a.m. to 10 p.m., the Sag Harbor Launderette serves the “people who service themselves, who do their own laundry, and then you’ve got the other extreme, the people who own the yachts and come from the city . . . who drop their laundry off,” said Mr. Tabert.

The business is not only one of the few self-service launderettes on the South Fork — there are others in Amagansett, Montauk, and Southampton — but it is also the only spot in Sag Harbor to take in dry cleaning and offer sheet-pressing service, with many customers for the latter coming from yachts docked in the harbor. The pressing starts early, around 4 or 5 a.m.

In the summer, business is split evenly between those “extremes” Mr. Tabert referred to, but business during the rest of the year is primarily patrons who are doing their own laundry.

“You never know when it’s going to get busy,” Mr. Tabert said. Sundays and holidays are some of the busiest days for people doing their own laundry. He even recalls Christmas mornings when the laundromat has been filled with customers.

Mr. Tabert, who lives in Hampton Bays, started out in the nightclub business in the 1980s and 1990s and later owned a sports bar. That background, he said, has contributed to his even temperament. “It takes a lot to rile me.” He planned to continue with nightclubs, but after a near-fatal car accident left him in a coma for a month, he transitioned from a business marked by late nights to one defined by early mornings. And, he said, “I went from getting people dirty to making people clean.”

His first venture into the laundry industry was in Brentwood, where he renovated a laundromat. The renovation took months, and building up the business took years. His Brentwood clientele was decidedly different from his Sag Harbor clientele. In Sag Harbor, he said, jewelry inadvertently finds its way into the loads the business handles for its drop-off customers; in the Brentwood launderette’s drop-off loads he sometimes found firearms. “I was surrounded by street gangs,” he said. “Now I’m surrounded by yachts.”

He has nothing but good things to say about the range of clients who visit his Sag Harbor business. There has never been vandalism or theft, and everything is recorded. “You can leave your purse on the counter and it’ll still be there.”