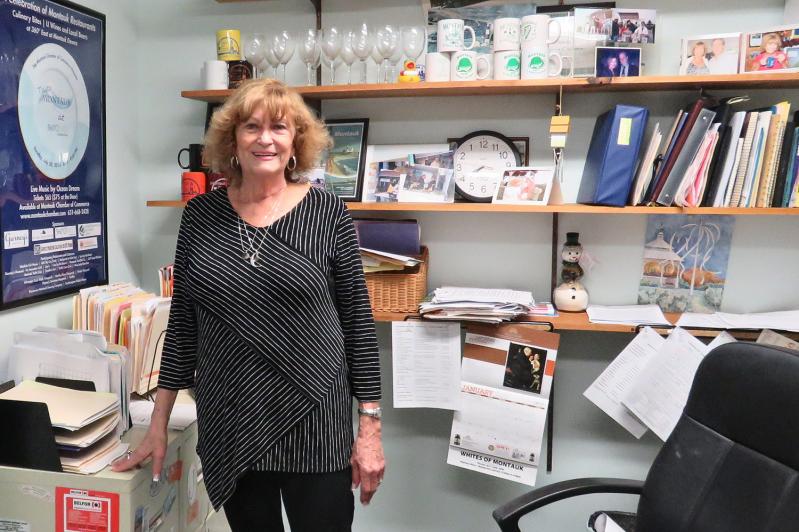 Laraine Creegan, director of the Montauk Chamber of Commerce, is preparing to end her 16-year tenure there and do some traveling this spring.
Jane Bimson
By Christine Sampson

Even dedicated Montaukers need a change of scenery once in a while. Laraine Creegan, the longtime director of the Montauk Chamber of Commerce, has plans to retire from the organization in April — and to begin traveling the world. Her first stop will be Amsterdam, followed by Brussels and France.

“I love the job, but I’m getting on. It is really hard to do this job 110 percent and be able to take an extended vacation,” Ms. Creegan said this week. “I wanted to do something different, but it doesn’t mean I’m not going to be here, be available, volunteer. I love Montauk.”

Ms. Creegan has been Montauk’s chamber director since 2004, coming on board just a few years after she built her house in Montauk and retired from a 38-year career with what is now Verizon, which was once known as Bell Atlantic and Nynex. She had started out in customer service, eventually becoming a manager and transitioning to marketing, training, and development.

They were jobs that would prepare her well for her role with the Chamber of Commerce. There, her leadership over the last 16 years has been a constant in a hamlet characterized by change.

Under her leadership, the chamber launched the farmers market 12 years ago. Over the years, it grew from 6 vendors to 36, and proceeds from the market’s vendor fees support the Montauk Food Pantry. She helped grow the annual fall festival from “a bunch of pumpkins, a hot dog wagon, and a couple of pots of chowder,” she said, into a more robust affair.

“The one thing I’m always mindful of is to not take anything away,” she said. “You just add to it. People have expectations.”

She has attended numerous travel shows west of here to promote Montauk. She also ushers the 60-plus-page Montauk vacation guide to publication every year.

“People UpIsland have said to me they’ve never seen so much activity from one chamber,” Ms. Creegan said. “There are a lot of events that come out of this place and it’s what drives tourism out here. The businesses are happy with our performance. They have certainly had a say in what we do, since we represent them.”

Ms. Creegan summered in Montauk as a child and knew early on that she wanted to make her home there someday.

She said she has mixed feelings about retirement, and that she will miss the routine of coming to work and staying busy. She said she is grateful to the staff, volunteers, and especially the chamber’s board.

“Working with the board of directors has really made my job easier because they’re such an active board and proactive in what we do,” Ms. Creegan said. “If I had to do this all by myself or with one other person, I couldn’t accomplish what we’ve done. It’s very important that people understand how much time and effort goes into this.”

She is also looking forward to spending more time with her 9-month-old kitten, a Scottish fold named Lola. “Her face looks like an owl. She’s really cute,” Ms. Creegan said. “She is the friendliest cat. She’ll occupy me a little bit.”

The Montauk Chamber of Commerce has officially begun interviewing for her successor, and is also seeking an event coordinator. The organization is looking to have a new director in place by March, so that person can spend a month learning the ropes from Ms. Creegan.

“The businesses out here are wonderful to work with,” she said. “I’m very happy to still be here. I wouldn’t leave. I’m here if anyone needs me.”