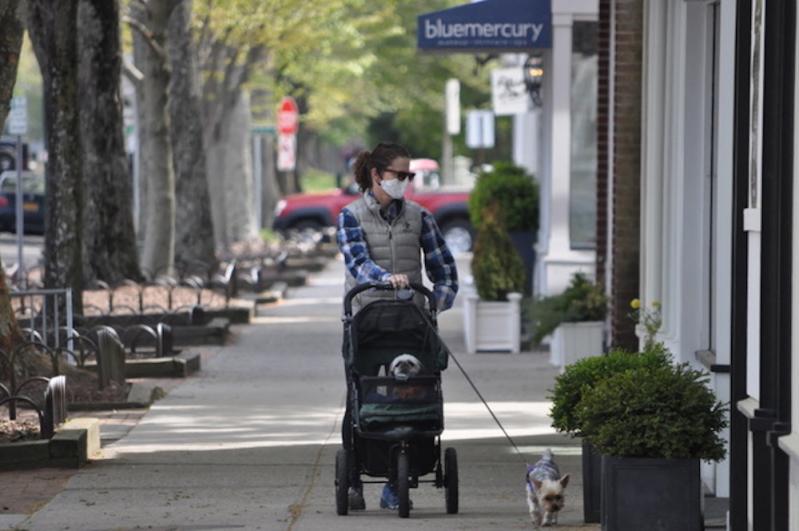 When retail shops are allowed to reopen, East Hampton Village is preparing to designate areas on Main Street, Newtown Lane, and in the Reutershan parking lot that can be used for curbside pickup.
Everett Rattray
By Jamie Bufalino

South Fork retail stores have been closed to the public during the economic shutdown, but when they are allowed to reopen, shopkeepers said this week that they will be welcoming back customers with steam-cleaned products, curbside pickup, sidewalk sales, and pleas to wear masks and practice social distancing.

“The entire store is being sanitized, and all merchandise is being steam cleaned as per the guidance of an infectious disease specialist we have consulted,” said Tiina Laakkonen, the owner of Tiina the Store, a women’s clothing boutique in Amagansett. When the store reopens, items touched by customers or staff will be steam cleaned again, she said, and “high touch” surfaces will be sanitized frequently with an emergency-room-grade cleaning solution.

An air filtration system had been installed before the pandemic, and, fortuitously, the store’s layout is well suited for the current crisis, she said. “It is several thousand square feet with an open floor plan, and we rarely have more than a few customers in the space at any one time.”

Nevertheless, the store will be limiting the number of shoppers, and it will also accommodate those who would prefer to shop solo. Staff will be wearing masks and gloves, which will also be provided to customers. Those who shop on the store’s website will be able to pick up their items in a safe and private way, she said, and contactless credit card transactions will be available to those who shop in person.

Ms. Laakkonen said she has been monitoring the health of her staff (“fortunately, everyone has been in great shape”), and, upon reopening, will continue to do so daily. Anyone exhibiting symptoms of illness will not be allowed to work. Shoppers will receive the same scrutiny. “Any customers we see showing any symptoms of fever, upper respiratory problems, coughing, sneezing, or unsafe social distancing practices will not be permitted to enter the store,” she said.

Valerie Smith, the owner of the Monogram Shop in East Hampton, said she is awaiting permission to provide curbside pickup for customers, but in the meantime, she’s been in the shop alone on Wednesdays and Fridays fulfilling online orders. “We’ve been sending out 30 to 35 boxes per day,” she said. “The U.P.S. guy hates us, but it’s been our salvation.”

Most of her customers are familiar with the shop’s collection of hand towels and other “utilitarian” items, she said, so purchases are not dependent on in-store browsing. That’s been a plus during the lockdown, which she expects will continue well into the summer. “I can’t imagine we’ll be open for the Fourth of July, not in a million years,” she said. Instead, she foresees increasing her days in the store from two to five to keep up with orders placed by phone and email.

To boost revenue at the Petit Blue children’s store in East Hampton, Colleen Moeller, the owner, has been making personal deliveries of candy and assorted helium balloons, including unicorns, rockets, and rainbows, to those celebrating birthdays, graduations, and holidays. “I’ve been going strong since Easter,” said Ms. Moeller, who often dons a shark costume when she makes a delivery to a child’s party. “You can either hide in your room or you can say, ‘What can I do?’ “ she said of her revamped business.

Marketing her goods and services on Instagram has provided an influx of customers, she said, but she’s looking forward to having people return to her shop. Anticipating that the village will require stores to post signs imploring people to obey social distancing and other guidelines, she has already ordered a supply. One of her favorites features a smiley face emoji sporting a mask, she said.

East Hampton Village Mayor Richard Lawler said on Tuesday that the village is currently formulating a set of rules that stores will have to follow when they reopen, and such signage will be required. The village is also preparing to designate areas on Main Street, Newtown Lane, and in the Reutershan parking lot that can be used for curbside pickup, he said, and will likely limit the number of customers allowed in stores.

In Sag Harbor, Bob Plumb, a village board member, has been leading a task force comprising government officials and store owners focused on finding a safe way to reopen businesses on Main Street. “There’s no consensus from shopkeepers,” he said at a board meeting on Friday. Clothing stores would favor scenarios like sidewalk sales, he said, that would allow customers to feel safe casually browsing, while other stores, such as the Sag Harbor Variety Store, are more amenable to having shoppers make quick jaunts in and out.

Making sure there is enough room on the sidewalks for shoppers and other pedestrians to practice social distancing is one of the key issues the village will have to address, he said. The narrow sidewalks in front of Buddha Berry and Sen pose the greatest concern. To avoid having clusters of pedestrians at those “choke points,” he suggested the village eliminate parking spaces in front of the businesses. “More than 50 percent of shopkeepers were okay with cutting down on parking,” he said.

The task force is also considering requiring store owners to limit capacity, and, for stores that have both front and back entrances, to adopt one-way traffic patterns with customers entering in the front and exiting in the rear. It is also contemplating asking the Hampton Jitney and Suffolk County Transit to temporarily refrain from using a Main Street bus stop in an effort reduce crowds, said Mr. Plumb.

Mayor Kathleen Mulcahy said she was “nervous about taking parking away,” but agreed that social distancing and the use of masks would be integral for a safe and successful reopening of retail stores and other businesses. To drive home the importance of wearing masks to protect fellow residents, the village plans to display banners along Main Street that feature some of the village’s front line heroes, including emergency services personnel and grocery store clerks. The signs will say “Wear a mask: Please do it for your neighbors, friends, co-workers, parents, grandparents, children, spouse.”

East Hampton Samples Are a Crucial Contributor to Lyme Test
Ready to Adopt a Pet? ARF Is Ready, Too
Guild Hall's Curator Visiting Studios Virtually Through June
Seeking Stories and Images From the Time of Covid
END_OF_DOCUMENT_TOKEN_TO_BE_REPLACED