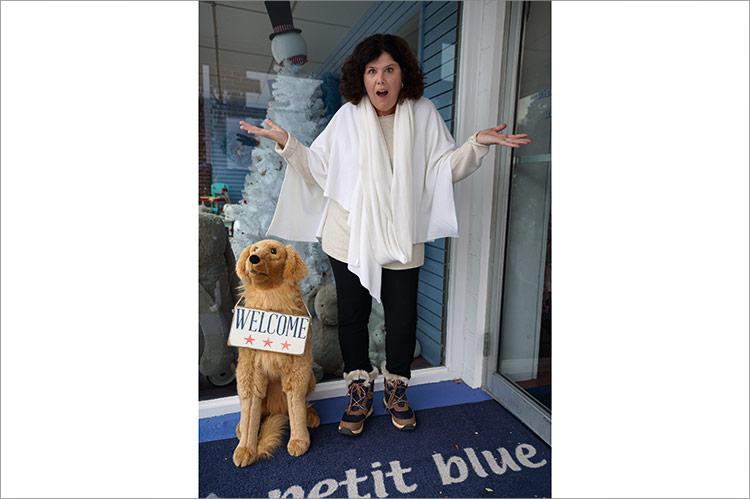 “I should be able to put a dog in front of my store,” Colleen Moeller, the owner of Petit Bleu, said this week regarding an East Hampton Village rule that she thinks is unnecessarily restrictive.
Doug Kuntz
By Jamie Bufalino

The owner of Petit Bleu, a children’s store in East Hampton Village, who was cited by code enforcement earlier this month for placing a stuffed golden retriever at the entrance to her shop, wants the business community to band together to change the village’s onerous regulations.

As someone trying to run a viable business in the village, “I should be able to put a dog in front of my store,” said Colleen Moeller on Friday.

According to village code, however, she can’t. “No signs or other advertising structures used . . . to attract the attention of the public shall be displayed out of doors,” the code reads.

Ms. Moeller, who has owned the store on the Reutershan parking lot since last year, first ran afoul of that law this summer when she placed a stuffed giraffe out front. “In the summer, you cannot see if the store is open or closed because it’s so bright,” she said, so the giraffe, which was festooned with a small East Hampton sign, was a way to invite customers in.

It was also a way, she said, to avoid violating the village’s prohibition against shopkeepers keeping their doors open when air-conditioning is on. “Any business owner will tell you that an open door means come on in,” she said.

She received a citation for the giraffe, she said, and paid a fine. She has also received numerous parking tickets, she said, for exceeding the two-hour limit in Reutershan. “I have parking anxiety,” she said. “I’ve left 15 to 20 people alone in the store to move the car.”

Undeterred by her first run-in with code enforcement, she put the golden retriever out front, she said, because it created a sense of community. “People would come by and have conversations.”

She also sees the second violation as a small act of resistance against a village that is not friendly to small businesses, she said. “I’m trying to get owners to come together to change ‘the village of no’ to the village of yes,” she said, using a slogan that has been coined by those who think East Hampton Village has too many restrictions.

Ms. Moeller said she has not attended a village board meeting to express her complaints about the code or taken other steps to effect a code change. “I’m still learning,” she said. “It’s like having a new baby.”

When she was getting ready to launch the store, she debated between Sag Harbor or East Hampton Village. One year and two code violations later, she doesn’t regret her choice. “There’s a need for a baby store here,” she said. “And I’m here for a reason. I’m going to make a difference.”