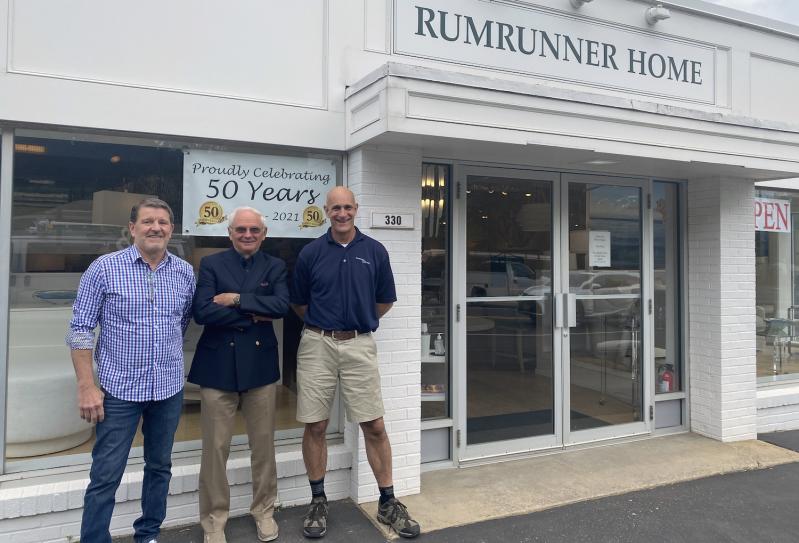 Fifty years after opening at Gosman's Dock in Montauk in 1971, the Rumrunner Home furnishings store has remained an East End fixture by capitalizing on the area's population boom, and surviving skyrocketing rents, ever-changing design trends, and competition from national brands.

"We were fortunate because the wave of the Hamptons' popularity was just beginning when we started," said Tom Bogdan, the store's founder, who left a career in advertising in New York City to try his hand at launching a business. "I was on the Campbell's Soup and Pepsi Cola accounts, and I had control of a $110 million budget, but I wanted to get away from corporations and test myself -- can I make money?" he said.

After his wife, Marilyn, spotted an ad in The New York Times for a retail space at Gosman's, the couple drove out to Montauk ("a town I had never heard of") to check it out. They met with John Gosman Sr., who laid out his vision for creating a complex of shops and restaurants, and "we were absolutely enthralled," Mr. Bogdan said. "Right behind him was a spanking brand new building, and he said, 'This is available.' "

The store started out selling sterling silver jewelry from Mexico and a "whole jumble of other stuff," said Mr. Bogdan, who chose the shop's name after reading about Montauk's history as a Prohibition-era rumrunning hot spot. "The first person to walk into this little store was Truman Capote, so right then I knew I wasn't at the Jersey Shore anymore," he said.

"In the first two or three years, we made every mistake in the book, but by the third year, we were catching on," he said. "Gosman's Dock was the hottest thing at the time." To take full advantage of the popularity, the store operated from 10 a.m. to midnight. "I was young and ambitious, and as the Gosmans began to trust my wife and me, as buildings became open, we began to expand," he said. They veered into other markets including men's and women's fashions, and children's toys, and went on to simultaneously own 12 stores in Montauk. "Then we cast our eyes to East Hampton," he said, and a Rumrunner branch in Southampton would follow soon after.

As the retail empire grew, Mr. Bogdan tapped Greg Foglia, who had worked as a stock boy since he was 14 years old, and Regis Waleko, who had developed a rapport with Mr. Bogdan as an employee at Montauk's hardware store, to oversee the expansion. "Those two were the best decisions I made," he said.

"My job was to manage the store in East Hampton," said Mr. Waleko. "I had no idea what to do, and Tom taught me everything." The store, which, at the time, was in the Main Street space now occupied by J. Crew, began to evolve under the new leadership. After years of selling gifts and accessories, "we turned it into solely a furniture store," said Mr. Waleko.

"What I did was okay, but these two took it to a whole new level that I never could have," said Mr. Bogdan, who sold the business to Mr. Foglia and Mr. Waleko in 2000.

Mr. Foglia focuses on the logistics and financial part of the business, and Mr. Waleko handles the purchasing. The duo have had to adjust to an increasingly challenging landscape for East End retail businesses. When the rents became too steep at their Main Street locations in East Hampton and Southampton, they moved to less expensive, less high-profile spots: Montauk Highway in Wainscott for the former, and Hampton Road for the latter. Still, the business continued to thrive. "We have a very loyal following," said Mr. Foglia. "The people who were our customers back in the 1980s, most of them aren't here anymore, but their offspring are. Rumrunner is part of their heritage."

The business's local roots have been the secret to its longevity, Mr. Foglia said. "We know the names of our customers, they come in and ask about our kids, and we offer a lot of personal attention." The store is also far more nimble than its corporate competition. "We change," said Mr. Waleko. "If you go to Restoration Hardware, the sales floor is going to look like that for the year. We have inventory changing, we sell stuff off the floor, we can deliver in a day or two, and we can take furniture to your house to see if it fits."

From the first day onward, the store has had one overriding philosophy, Mr. Bogdan said. "Work hard at everything you do, and realize that the profit comes from the people who are gracious enough to come here to shop." Or, as Mr. Foglia put it. "It's the last of a dying model, which is the mom-and-pop store."