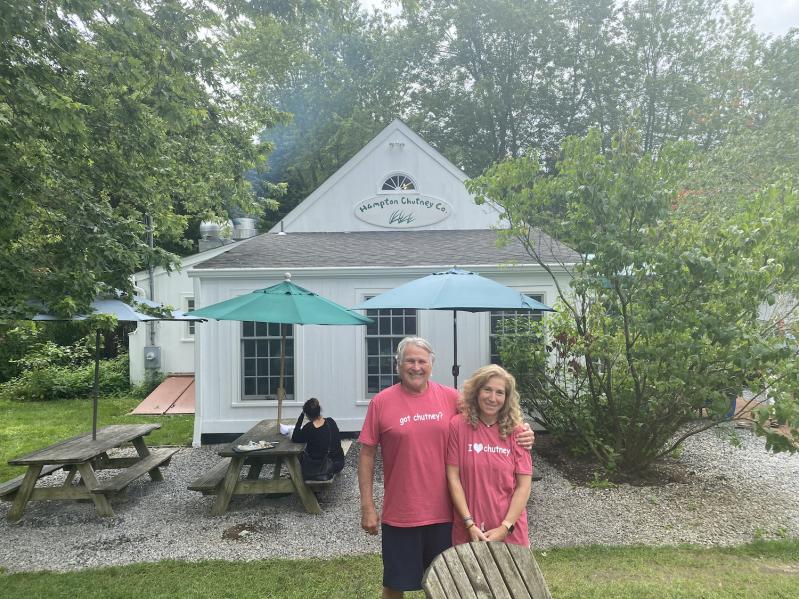 Gary and Isabel MacGurn will move their Hampton Chutney Co. from Amagansett Square to East Hampton by Christmas.
Jamie Bufalino
By Jamie Bufalino

A few weeks after announcing in May that Hampton Chutney Co. was being squeezed out of its longtime home in Amagansett Square and was in need of a new space, Isabel MacGurn, who owns the eatery with her husband Gary MacGurn, got a firsthand feel for how beloved the eatery has become.

"I was getting out of my car on Main Street in East Hampton, and this nice looking young couple walked past, and the guy said, 'Can I ask you something?' " she recalled. "I thought he was going to ask for directions, and he said, 'Do you know where you're moving?' I said, 'Actually, yes we do, but I can't tell you yet.' And she said, 'We live across the street from where you are now, so just tell me, are we going to be very disappointed?' and I said, 'Well, you like shopping in East Hampton, right?' And she said, 'Okay, that's fine, just not Wainscott or Sag Harbor.' "

Now that a deal for a new space has been finalized, the MacGurns are eager to share the good news: Starting in December, Hampton Chutney Co. will be taking over the space on Newtown Lane that is now occupied by Mary's Marvelous.

The MacGurns are friends with Mary Schoenlein, the owner of Mary's Marvelous, and, in the spring, Ms. MacGurn told her about their real estate woes. After having been in Amagansett Square for more than 20 years, they were on the verge of renewing the lease when the property manager told them there would be a prohibitively costly rent increase. "Mary said, 'Why don't you come look at my space,' " said Ms. MacGurn. The lease was up in February, Ms. Schoenlein had told her, and she was not inclined to renew it. "When we went over there, we were like, 'Wow,' " said Ms. MacGurn. "She did a great job building out that space, everything is to code and clean, and we could see how it could work for us."

Still, the couple, who launched the restaurant in Amagansett in 1997 -- in the space that is now home to La Fondita -- were hoping to remain in the hamlet. "We have an allegiance to our core customers," she said. They considered several Amagansett sites including Khanh Sports on Montauk Highway, and the space formerly occupied by the Body Tech gym, and "we also had customers who said they would be willing to buy a property to make sure we stay here." None of the options were feasible, she said, because of the time it would take to transform them into restaurants.

A meeting with Robert Zecher, the new owner of the Newtown Lane building that will be their future home, helped convince the couple to make the move to East Hampton.

"There was such a difference between getting pushed out of Amagansett Square, and feeling like they didn't really want us, and Robert, who has been so excited about the whole prospect," said Mr. MacGurn.

Mr. Zecher said he offered the business a long-term lease because he was eager to have "a quality tenant with local owners."

The impending closure of Mary's Marvelous is the one downside to the deal. The store is so popular that Mr. Zecher said he had made the purchase of the building contingent upon Ms. Schoenlein's renewing the lease, and he was unnerved when, prior to the transaction's being finalized, she informed him the store would be closing.

Still, Mr. Zecher will be getting a formidable successor. If Mary's Marvelous is an all-star, "we're like a first-round draft pick," said Ms. MacGurn.

The MacGurns will take over the lease on Oct. 1, and the lease on the Amagansett space runs through the end of the year. "My intention is to renovate in October and November, close the Amagansett store for a week in early December, and move everything over. We're looking to open before Christmas."

The couple plans to rework the layout to provide 16 indoor seats (five along the front window, seven along an interior wall, and a high-top table with four), and a bathroom for customer use. A wall between the front of the house and the kitchen will be lowered to allow people to see dosas being made. "That's always been our thing," said Ms. MacGurn. There will also be plenty of outdoor seating.

The restaurant is also considering adjusting its operating schedule to accommodate the routines of Ms. Schoenlein's customers. "In the off-season, we usually open at 10 a.m., but because people are used to getting coffee there, we may open at 9," said Ms. MacGurn. "I don't know if I can swing 8."

Mr. MacGurn said he anticipates a smooth transition, and he's looking forward to luring in new customers. "What really excites me is being near the middle school, the high school, the train station, and even having people come from Sag Harbor and Bridgehampton." As for the Amagansett-based clientele. "Everybody has said, wherever you go, we're going to follow," he said.