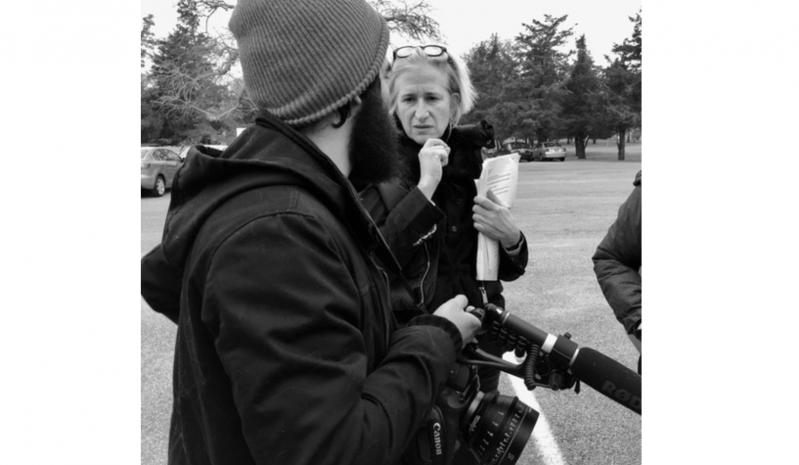 Melissa Bank directing a film based on her book "The Girls' Guide to Hunting and Fishing" on the Stony Brook Southampton campus.
Magdalene Brandeis Photos
By Baylis Greene

Melissa Bank wrote one of the biggest books of the turn of the last century, "The Girls' Guide to Hunting and Fishing," in which through seven interrelated stories we learn of the coming of age of one Jane Rosenal, who, when she reaches that age, wants nothing more than to be a genuine Manhattanite.

The book spent months on The New York Times's best-seller list, but its staying power in the popular imagination extended far beyond that, at least in small part helped by Viking's choice of cover, a photo of a young woman in Wellington boots and a red peacoat jauntily running away from the camera and seemingly into the white field of her future. On her head, a hunting cap deliberately recalling the ultimate in citified sardonic youthfulness, Holden Caulfield, its "earlaps," as he called them, suitably down.

On the strength of that cultural phenomenon alone, it was appropriate that when Ms. Bank died of lung cancer at her house in East Hampton on Aug. 2, age 61, word spread, or you might say was instantly parroted, across the news sources of the internet, USA Today, Bloomberg, the U.K.'s The Independent, you name it.

But of course there's more to any one person than a singular success. For one thing, who knew she was a filmmaker?

"As we were building the M.F.A. in Film program at Stony Brook Southampton, Melissa lifted the sibling throughline from 'The Girls' Guide,' wrote the screenplay, cast it, set it at the Princess Diner in Southampton, and filmed it," Magdalene Brandeis, the executive director of that program, recalled. "A first-time director's first day on the set is like a Rorschach test, an ink blot that reveals all. With SAG actors and an entirely new crew — and with indie film legend and Stony Brook Film's artistic director Christine Vachon of Killer Films watching over her shoulder — what astonished me, watching Melissa direct, was that the full maturity of a seasoned director was already there. Very few people have it, but Melissa did."

The two met in 2008. "She was my first encounter with a female art monster," Ms. Brandeis said, "the woman who served art above everything else. . . . She also came to the aid of many young students' struggles around illness, particularly cancer, giving hope to all from her amazing journey — she wrote her best seller after breast cancer at 30. She wrote it after getting hit by a cab and suffering brain damage. She was a polestar for all who were going through difficult times."

"When I invited Melissa to join our faculty over 20 years ago, it took a bit of persuading," Robert Reeves, associate provost in creative writing and film at Stony Brook Southampton and Manhattan, said. "She didn't think of herself as a teacher, not an unfamiliar notion for a supremely talented, hugely successful working writer. But Melissa soon turned herself into a great teacher, and to her own surprise, discovered that she loved teaching. She also loved being part of our community of writers, and soon recommended her friends to join our 'merry band' — early on, Matt Klam, and later, David Rakoff. Her judgment was infallible whenever she declared a particular writer 'one of us.' By that she meant funny and kind and not in the least self-important. That's not a bad start on a description of Melissa herself."

That community of writers wasn't limited to the campus.

"The Log Cabin Writers started meeting in Melissa's rustic log cabin in the Northwest Woods in 2016," Ms. Brandeis said. "We were five women who took to each other. We went on an intensive writers retreat. We met during a blizzard, when only a huge four-wheel truck could make it down her drive. We met in person, then outside, then in masks, and by Zoom. Melissa was an incredibly generous and gifted reader and a fierce advocate of our work. As she brought to our group the early drafts of a collection of her stories that got picked up by Viking, I noticed her words, even in the earliest drafts, gave off the sense of durable matter, something crafted by hammer and stone, something that transcends time. 'Your words are like tiles,' I dumbly repeated after each story. 'Wit and precise language,' others have said. I have come to understand this: Her writing has permanence. Her incredible spirit informed even the spaces between words, between paragraphs, between stories. The blank spaces. It still does."

Ms. Bank was also the author of "The Wonder Spot," from 2005, a novel chronicling a young woman's struggles with work and love in the city.

"It's no trick to contribute to the agony of the writing life," Laura Baudo Sillerman, another friend and colleague, said. "It's a genuine talent to transmit the secrets that can lead to the ecstatic moments within it. Melissa was one of the gurus who had the gift."

"It might be hard for readers of her absolutely brilliant books to believe someone so consummately aware of her characters' capacity for subtext had absolutely none of her own. That was true, though. She was singular in her forthrightness."

"What a loss. We've lost a friend, teacher, beautiful person whose strongest desire was to get to the truth of how and why we succeed and fail at loving each other. No wonder so many people are suffering her absence." 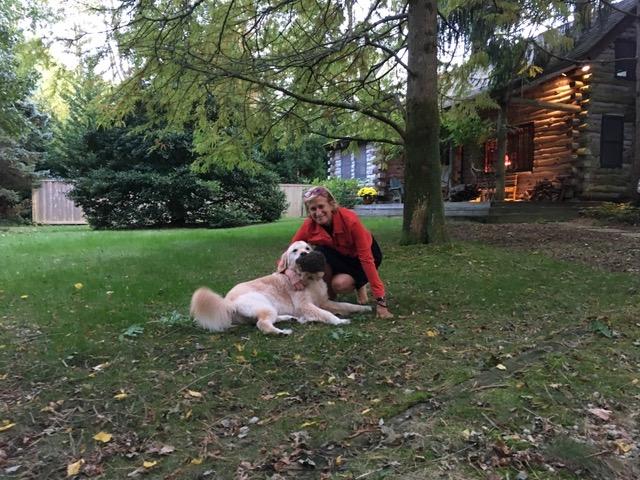