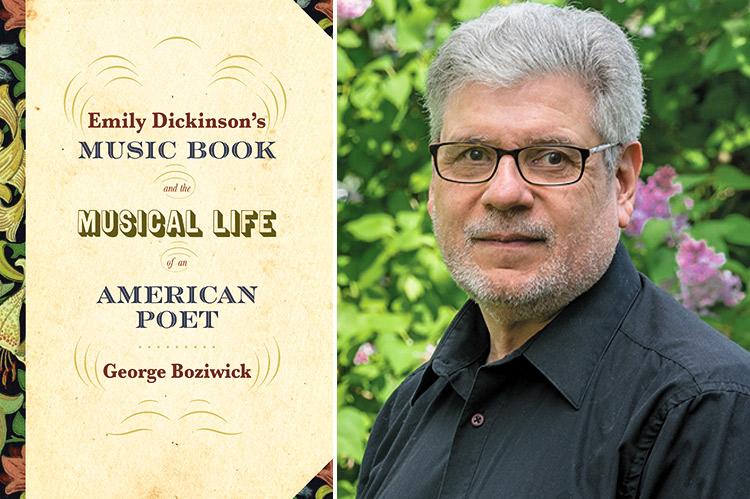 In mid-19th-century United States and Europe, it was considered proper and refined social decorum for young upper and middle-class women to take piano and voice lessons, make music in the parlor, and go to concerts. The production and marketing of printed music was making great advances, and so collecting a good amount of sheet music also became an important part of the custom. At the end of their musical studies, it became a tradition to have students' favorite sheet music bound into decorative keepsake volumes.

Music played an important part in the formative years of the iconic American poet Emily Dickinson (1830-1886), and she was an accomplished pianist well before she began writing poetry. Her bound music volume, from about 1851 or 1852, has been preserved in the Houghton Library of Harvard University, and this curated collection is the subject of George Boziwick's recently published "Emily Dickinson's Music Book and the Musical Life of an American Poet." Mr. Boziwick takes these 107 pieces of piano and vocal music as focal points to look at Dickinson's life, her musical and poetic development and their interrelationship, and the social, political, economic, and cultural times.

Mr. Boziwick is the retired chief of the Music Division of the New York Public Library for the Performing Arts; he has contributed articles on various musical subjects, including some about Emily Dickinson, to a variety of books and journals. He has also composed a good number of works for various ensembles, some of which are settings of Dickinson's poems, and as an instrumentalist with his Red Skies Music Ensemble he has presented a variety of programs centered on Dickinson and her life. So he is indeed well versed in the subject material of this book.

"Emily Dickinson's Music Book" is not only for those with a particular interest in the poet, but it has a broader appeal, since it is filled with enjoyable and descriptive side trips and vignettes about the Dickinsons' home, parlor, and family life, the social customs of the day, the concert scene and touring artists, composers, the business of publishing, politics, and the years leading up to and during the Civil War. All of this is accompanied by contemporary newspaper and journal entries, correspondence that is often poetic in itself, and of course excerpts from her poetry.

For example, her love of gardens and nature relates to "The Tulip Waltz" and "The Willow Waltz" in the collection; "Yankee Doodle" and "Oh Give Me a Home if in Foreign Land" speak to the political and social issues of the day. Her father, Edward Dickinson, had an interest in and association with militias, as reflected in "The Locomotive Quickstep." (He was a well-regarded lawyer who was elected for one term as a U.S. congressman as a member of the Whig Party from Amherst, Mass.)

Mr. Boziwick says that in Dickinson's day it was common for people to be quite familiar with Scripture and hymn texts, to the extent of quoting them in conversations and letter writing. He shows how her deep familiarity with the New England Christian hymn tradition influenced her meter, imagery, and tropes.

A delightful account from correspondence describes an evening with Dickinson improvising at the piano this way: "Rare hours, full of merriment, brilliant wit, and inexhaustible laughter, Emily . . . often at the piano playing weird & beautiful melodies, all from her own inspiration, oh! She was a choice spirit!" There are stories of her fascination with the Swedish soprano Jenny Lind and the pianist Anton Rubinstein. One poem that is cited was written at about the time she attended concerts by these two performers, in which she associates herself with the concertgoers.

We learn that Dickinson visited the homes of Black and Irish laborers, and she favored the fiddle tunes, jigs, and reels that she heard from them, which were less common in other, genteel music books. Mr. Boziwick handles the difficult and emotion-laden issue of blackface minstrel repertoire with sensitivity and insight.

Although much has been written about the poet, "Emily Dickinson's Music Book" is said to be the first full consideration of her daily musical life, and a high point of the volume is showing how Dickinson considered a career as a performing musician, and her giving up of that idea came at the same time that her poetry writing began in earnest. Mr. Boziwick convincingly demonstrates how the many layers of music in her life informed her poetry. He draws parallels between Dickinson and the composer Charles Ives, although they weren't contemporaneous, in their musical borrowings, their "dissonance of rhythmic punctuation, with glimmers of American modernism," and their "blending together the past with something that was startlingly new."

For the scholarly minded, there are some 40 pages of notes, and an appendix lists detailed information for each piece in Dickinson's music book. There are also online appendices that have more background, images of title or first pages, and some audio examples.

"Emily Dickinson's Music Book and the Musical Life of an American Poet" makes a significant contribution to understanding of her life, creativity, and musical milieu. Mr. Boziwick has researched the material in detail, but at some 170 pages it is a straightforward read, and recommended as an engaging and satisfying volume both for the Emily Dickinson devotee and the general reader.

Thomas Bohlert was the director of music for the East Hampton Presbyterian Church from 2000 to 2016. He lives in Springs.

George Boziwick lives in Sag Harbor. More information about him, his work, and his ensemble is at georgeboziwick.com.