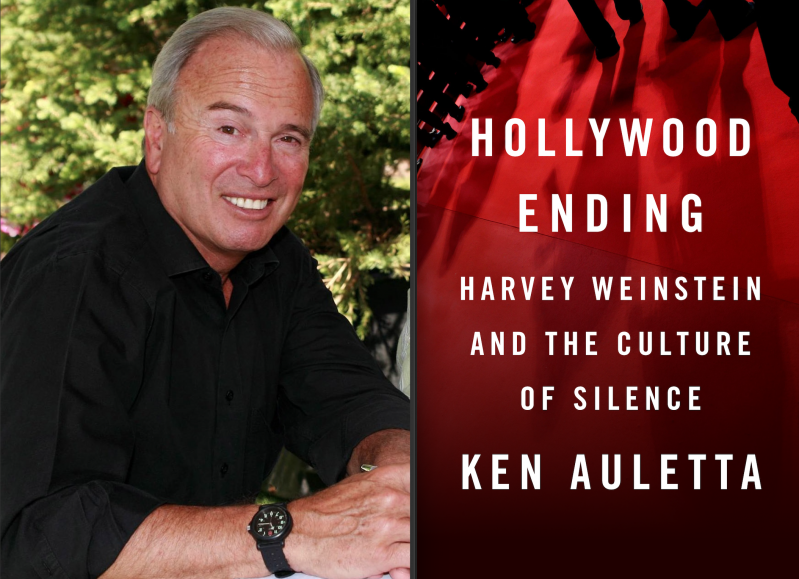 Ken Auletta
Courtesy of the Author
By Richard Horwich

If Harvey Weinstein had not existed, he would have had to be invented — by Ken Auletta, or another experienced biographer with a nose for scandal and an ear for racy dialogue.

At this point, his career as a serial rapist is well known, and the fact that a New York judge sentenced him to 23 years in prison (a very tough stretch, even for crimes as brutal as his) testifies to the animosity of the public at large and, if Harvey (as Mr. Auletta refers to him throughout) is to be believed (always a big ask), the judge himself.

Despite Mr. Auletta's obvious distaste for Mr. Weinstein, "Hollywood Ending" is not a hatchet job. The author is scrupulous about maintaining journalistic ethics, supplying times and dates to the events he says occurred, and providing voluminous quotations from everyone concerned — Harvey, his brother, Bob, Disney's Michael Eisner, and of course the dozens of women who leveled charges ranging from sexual harassment to forcible rape at him.

But before we avert our eyes from behavior so heinous that, without Mr. Auletta's careful documentation, it might seem fiction, let's take a minute to recognize a couple of positive attributes of the shambling, six-foot-tall, 300-pound, blackhead-covered behemoth who screamed at everyone who worked with or for him and couldn't scarf down a burger without half of it ending up on his shirt.

Mr. Auletta describes the intelligence and industry of the young Harvey, a boy who devoured books and watched every movie he could. Let's remember that, as the alpha male at Miramax, the studio he and his brother founded, he gave us "Sex, Lies, and Videotape" (his first hit), "Shakespeare in Love," "Like Water for Chocolate," "Pulp Fiction," "My Left Foot," "The Piano," "Good Will Hunting," "Cold Mountain," and "The King's Speech." He had an encyclopedic memory, a famous ability to fix a troubled script, great salesmanship, and a keen sense of how movies were changing as he grew up in the 1960s. Miramax grew exponentially, especially after it merged with Disney, and despite many disagreements between Harvey and Mr. Eisner, the mouse-in-charge, his power and reputation grew boundlessly.

That was the decade when foreign films began to show up on American screens, and Harvey credited Truffaut's "The 400 Blows" with providing the epiphanic moment when he realized that a new form of cinema was not only possible but inevitable. But Mr. Auletta points out the paradox in his Jekyll and Hyde personality, in that he also blamed that revolutionary decade for his incessant sexual impulses and his inability to control them — not that he ever tried very hard.

The author describes Harvey's sexual modus operandi as something like this: By some means, he'd contrive to be alone with an attractive woman (usually an aspiring young actress) in a hotel room. When she arrived, he'd be naked, and ask her for a massage; whether she complied or not, he could do whatever he wished with her. Rosanna Arquette was an early victim.

"She says he grabbed her hand and pushed it onto his exposed penis," Mr. Auletta reports, and when she pulled it away, he boasted of his ability both to further her career and to damage it. She stormed out and, despite the fact that she was given a small part in "Pulp Fiction," believed, like the rest of his accusers, that he had harmed her career.

One of his staffers, Zelda Perkins, had a different take on his motives. She claimed that for Harvey, "the power play was perhaps more fun than the sex. . . . His foreplay was domination, not sex."

Harvey justified this sort of behavior (even the forcible rape) by claiming that all the sex he provoked was consensual. His understanding of that concept is far-fetched and self-serving. While it's true the "casting couch" had been in constant use for decades, the bargaining in Hollywood had never been that blatant. He actually believed in this quid pro quo: After he'd forced a woman to have sexual intercourse with him, he'd sometimes force her to endure cunnilingus, under the ludicrous impression that he was repaying her with pleasure that was complementary to his. (Many women faked orgasms at that point, just to get him to stop.) Everything — in his business life and his sex life — was bargaining; at one point, lying naked on top of some helpless woman, he said to her, "One thrust and I'll pull out, I promise."

Why did none of these women report him to the police, or wait months or years to do so? There is no single answer, but rape is a hard charge to prove without the physical evidence that it usually generates — stains, hairs, physical trauma — that is best culled within hours of the event. Some of his victims were so filled with shame and shock that they tried (usually without much success) to forget the whole episode. Others came to the conclusion that since they'd endured the ordeal, they might as well enjoy the career benefits that Harvey could provide.

The most famous of these women was the actress Annabella Sciorra, who withdrew from her friends and escaped into drugs and alcohol, and her career was impeded by producers saying to her, "We heard you were difficult," which she was sure came from Harvey. Eventually, Ms. Sciorra was one of the women who testified against him at his New York trial.

Predictably, money became a problem. Bob, Harvey's brother and partner, continually cautioned him to rein in his lavish spending: Though he was making hundreds of thousands of dollars a year, it wasn't enough, much of it going to personal comforts like first-class plane tickets and luxurious hotel suites at foreign movie festivals (he was a regular at Venice and Cannes, where adulation was heaped on him), and he often charged these diversions to Miramax.

Mr. Auletta tells us that "he burned through a billion dollars of investors' money," the MeToo movement sharpened the public's intolerance for the mistreatment of women, and Cyrus Vance Jr., the Manhattan district attorney at the time, put him on trial.

Harvey cut a pitiful figure in the courtroom. He was ill. Various ailments and a botched operation on his foot that obliged him to use a walker left him 75 pounds lighter, with gray, sunken skin and without any of the swagger or charisma he'd traded on. Initially, the prosecution had some trouble rounding up enough women who would give damaging testimony, but the end result was a conviction on three of five charges and a draconian sentence of 23 years in a maximum-security prison (one that had the necessary medical facilities to treat him).

He was then extradited to Los Angeles to face similar charges. It seems unlikely that he'll survive his twin incarcerations. What about an appeal? Grounds are few. Or parole? He would need to demonstrate remorse for his crimes, but apparently he doesn't know what that is.

Ken Auletta, who lives part time in Bridgehampton, writes about the media for The New Yorker. He will discuss "Hollywood Ending" at BookHampton in East Hampton on Aug. 6 at 5 p.m.

Mashashimuet Park's History and Future
A Conference for Young People to Create Solutions
Get Outside, Get Moving
END_OF_DOCUMENT_TOKEN_TO_BE_REPLACED