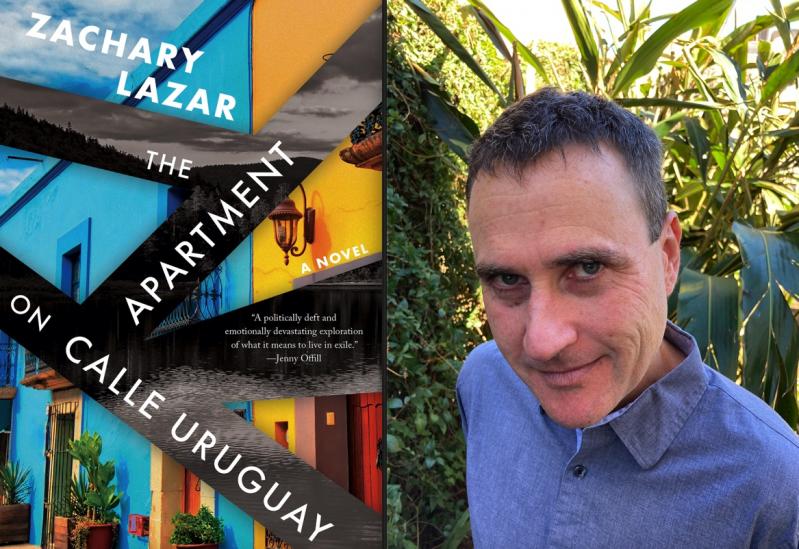 The main characters in Zachary Lazar's new novel, "The Apartment on Calle Uruguay," are a Jew, a Latino, and an African-American. If you have the urge to add to this, "walked into a bar," it might be because right away you see the arch construction of this self-conscious fiction, a lateral-moving meditation on race in Trump's America.

But be careful. "The Apartment on Calle Uruguay" is strictly a no-fun zone where even the mildest such joke would immediately land you in the P.C. doghouse.

The novel is set during the Trump years, and its narrator, Christopher Bell, is a painter of some renown living in a small cottage somewhere on eastern Long Island (almost certainly Southampton). He immigrated to America from Israel as a boy, and now, after the tragic death of a girlfriend, is suffering a spiritual crisis that has prompted him to give up painting.

Mr. Lazar wastes no time in presenting Christopher as a kind of progressive Superman. As we meet him, he's reading James Baldwin, has given up meat, and has decided that capitalism is an "engine of stupidity" because it has produced Donald Trump. His father was Tunisian (for the author to soften the "stigma" of Christopher's Israeli heritage?), and his girlfriends are women of color — currently Ana, a Venezuelan immigrant who lives nearby, and formerly Malika, an African-American artist who died in an automobile crash.

Malika's most notorious exhibition was titled "Millions of Dead Cops." Christopher describes it for us: "Cops shot by snipers from the trees in what could have been Los Angeles but also could be Baghdad. Cops blown up in their station house or torched alive in the squad car." He stays in touch with Malika's brother Jessie, who is serving a life sentence in Louisiana for armed robbery, but for whom Christopher would like to see clemency since, after all, "no one was hurt."

The narrative trajectory is mostly Ana and Christopher's very slow-moving romance — they're on, they're off; she goes to Mexico, he follows her, then returns alone to New York; then she too comes back. There are brief trips to Manhattan and Louisiana. Despite a blast of violence at its climax, the novel is mostly plotless, and so you are in the mind of the narrator as he somewhat aimlessly goes through his days, ruminating on art, Donald Trump, troubling current events, and, with an indefatigable obsession, injustice.

While there are plenty of great plotless novels, the problem here is that you are in the hands of Christopher Bell, one of the most sour, humorless killjoys in recent fiction. Except for sex with Ana, he eschews pleasure with the austere piety of a Jain. He doesn't like traveling, for example, because "It felt like going to a zoo, you were gaping, or trying to understand things you had no idea about. It felt almost like stealing to me."

In Mexico City he and Ana ditch the line for Frida Kahlo's house, since Christopher has a "secret contempt" for her work. Instead, he goes to Guanajuato to see mummies. "Their faces were contorted in agonized screams, as if they'd been buried alive, or they hunched to one side in a self-pitying groan."

He has trouble enjoying a jazz concert with a friend because he can't help "wondering how Jerome felt about all these white men playing this music originated from Black people." (Maybe Jerome feels the same thing I feel seeing African-Americans playing in a symphony orchestra. Absolutely nothing.)

Fourth of July celebration? That's another no-no. "So many people — many of my close friends — didn't celebrate the holiday or didn't know how to feel about it." Know how to feel? About emancipation from authoritarian rule and the paving of the way for modern liberal democracy? How about good? Come on, guys, this is an easy one.

Naturally, Christopher Bell doesn't drink, though by God sometimes you wish someone would slip him one.

To an extent I get it; four years of Donald Trump left many of us feeling less than great about ourselves. But Christopher Bell's vision of America is a dystopia you'll barely recognize. Early in the book, he says, "I had told her [Ana] before how I never came home at night, even out here [Southampton], without wondering if I would be confronted by the police for breaking in to my own house." (Are New York State police confronting people keying into their homes at night? Did I miss a meeting?)

While he's not convinced that his girlfriend Malika was killed, he also "didn't see it as an accident. It was not unlike the woman killed by the car in Charlottesville. I didn't see anything random in either of those deaths." I'm not sure exactly what this means, nor does he bother to explain it, but his mind seems to be making bizarre, irrational connections, like a left-wing version of QAnon.

Even a good sleep can't cool him off. "That night I had a dream," he says, "that I was being led through the woods behind my house by soldiers who rounded up others like me, marching us through a clearing. . . . There were more soldiers on the lawn, rifles slung over their backs or leaned up against the trees, looking straight ahead or at the ground and not at the naked girl chained by her wrists and ankles to a metal cot that had been dragged there."

A trip to the mailbox to get some air, clear the head? Even this is fraught. On his way there, Christopher averts his eyes from two of his neighbors sitting outside. This leaves him feeling, he says, "eccentric," and engenders this image: "I saw myself standing with a black hood over my head, electrodes on my fingertips, while my neighbors smiled with thumbs up as at Abu Ghraib."

The novel suggests that Christopher's fatal visions have been inspired by the events in Charlottesville and a recent mass shooting, but it never explains why he's so haunted by them. He seems to latch on to every awful thing that happens anywhere in America, personalize it, and add it to his roiling stew of paranoia and persecution.

And it's not like this penchant is anything new. As a schoolchild in New York City, he claims he was beaten up — not just a lot, but "every day," apparently because he was dark-skinned and Jewish. He even thinks his schoolmates wanted to murder him. "Those kids," he said, "really wanted to kill me. I had to learn to deal with it. . . ."

By the novel's end, he and Ana decide to leave the hellscape of Southampton for Mexico. On the drive down near the border, Christopher has this epiphany on why he's leaving America: "I didn't believe there was such a thing as meaning, but I knew the active pursuit of it was sanity, and that the opposite of sanity was whiteness, death."

Someone might want to remind the couple they're not on their way to 19th-century Tahiti. This flight from death and insanity will land them in a country that, according to homicide statistics, includes seven of the 10 most dangerous cities in the world.

At a party near the end of "The Apartment on Calle Uruguay," Christopher notices a bumper sticker that shows Trump urinating on the word "Democrats." It's a crass and perfectly dumb piece of political satire, but of course Christopher fixates on it. And it's here the reader may begin to see a missed opportunity.

If Mr. Lazar really wanted to reckon with the legacy of Donald Trump, he might have given us a novel that tries to understand why Americans — millions of whom voted for Barack Obama a few years before — elected a bigoted, mendacious, and ultimately dangerous president, and nearly did it again four years later.

On second thought, with the self-righteous "The Apartment on Calle Uruguay," maybe he's done exactly that.

Zachary Lazar, who has a house in North Sea, is a professor of English at Tulane University. His previous novels include "Sway" and "I Pity the Poor Immigrant."