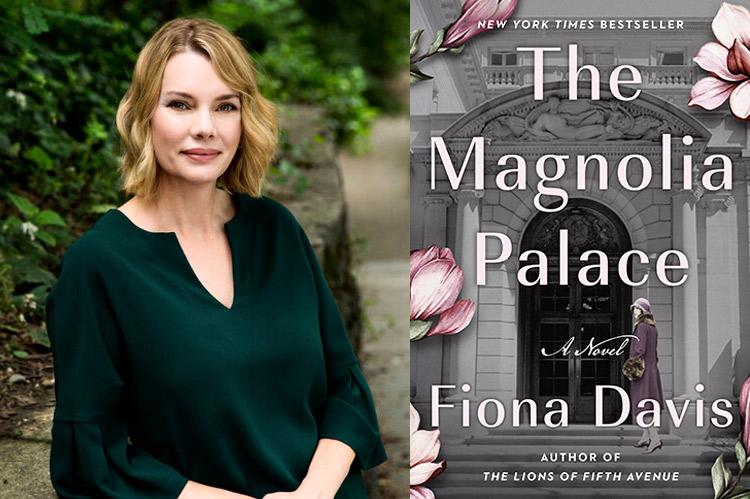 Fiona Davis's artful dive into what might have happened and what did happen in the lives of the steel magnate and renowned art collector Henry Clay Frick, in his last few months, and his daughter Helen Clay Frick, who herself became an art world visionary, is in part a cautionary tale of what "it" must have felt like.

"The Magnolia Palace" opens in 1919 with a model, Lilly Carter, who has become the muse of sculptors across Manhattan. Her visage and body are featured in public monuments all over New York — the "Three Graces" at the Astor Hotel, "Civic Fame" on top of the Municipal Building; she is even the centerpiece of what became the Plaza's Pulitzer Fountain. Her dream is to head to California and become a silent-film star. When her landlord's wife is found dead, however, she has to go on the lam.

A kindly servant outside a mansion at 70th and Fifth Avenue brings her in for a cup of tea and poof, poof, Lilly finds herself interviewing for the job of private secretary to the imperious Helen Clay Frick. The vast Frick mansion with its 27 servants is an excellent hideaway where Lilly hopes to earn enough money for that Hollywood trip.

Cut to 1966. Ms. Davis begins deftly braiding three stories: one being that of a British Vogue model, Veronica, on a fashion shoot at the Frick Collection nearly five decades after those early scenes with Helen Frick and Miss Lilly Carter. Veronica clashes with an overbearing Vogue photographer. She is furious at being made to parade outside in deep snow wearing skimpy clothes. (Women being forced to do what they do not deem acceptable is an important theme in this novel.)

The Vogue magazine entourage — models, assistants, and photographer — head out to the next shoot, leaving Veronica behind as an impending storm intensifies. New York City is plunged into a massive power outage. Veronica is trapped inside the darkened mansion. She thinks she is alone. Until she and a college intern, Joshua Johnson, working on the Frick archives in the basement bowling alley, bump into each other. Together they begin unraveling a 47-year-old mystery.

Back to 1919, when Henry Clay Frick asks Lilly to assist in Helen's betrothal to a Mr. Danforth. Frick offers Lilly enough money to get to those Hollywood silent-screen sets in style. Helen and her parents leave New York for a brief trip, but not before Helen creates a scavenger hunt through the mansion for Mr. Danforth to complete during her absence. Helen wants Mr. Danforth to fall in love with the artworks that she so adores. He never completes the scavenger hunt — no surprise that Mr. Danforth becomes enchanted with Lilly.

Jump to 1966, when Veronica and Joshua discover the 20 scavenger hunt clues that Helen had hidden in the pipes of the organ — all thousands of pipes of it — and go in search of solving a mystery. They know that the "Magnolia Diamond" secreted inside a cameo was supposed to have been buried with Henry Clay Frick, but it disappeared before his burial. (More about that gemstone below.) Veronica and Joshua are in the dark. Literally in a terrifying space. Each unsure of the other. Where is that pink diamond?

One of the delights of this novel is visiting the European fine and decorative artworks — Meissen "Birdcage" blue and white vases, and, oh, those Old Masters: works by Bellini, Goya, Turner, and Velazquez. Fragonard's "The Progress of Love: The Lover Crowned," Rembrandt's "Self-Portrait," Titian's "Portrait of a Man in a Red Hat," Vermeer's "Officer and Laughing Girl," Ingres's "Comtesse d'Haussonville" in that beautiful blue silk gown. The artworks that surrounded Lilly when the Frick mansion was private are in virtually the same places when Veronica and Joshua move from clue to clue during the hunt.

Throughout "The Magnolia Palace," Ms. Davis shows people who are justly accused of crimes and those who are falsely blamed. In 1919 not only is Lilly investigated for the murder of her landlord's wife, but also she will be accused by Helen of Henry Clay Frick's death and the theft of that priceless diamond hidden within the cameo. Not to mention that Lilly will be held accountable for the alienation of affections regarding Helen's potential husband, Mr. Danforth.

Atonement is a major theme in this narrative. Helen eventually learns the truth about those she has falsely accused and those she should have held accountable. (Mr. Danforth, Helen's would-be fiancé, turns out to be one of the morally complex characters.)

Yet one of the fascinating aspects of this novel is realizing how passionately Helen Clay Frick worked at righting her father's legacy. Henry Clay Frick, born into a Pennsylvanian Mennonite family, was a major figure in causing the 19th-century Johnstown Flood, as well as what is referred to as the "Homestead Massacre." Already in the early 20th century he was considered a murderous strikebreaker. Helen works assiduously at presenting her father in a far better light. A task she continues throughout her life — even as she is forced to square off against her own brother and mother.

Ms. Davis frequently touches upon a far deeper pain felt by Henry, Helen, and the entire family and then-servants. Henry and Adelaide's eldest child, Martha, was a magnificently beautiful baby, but legions of doctors and specialists couldn't figure out why she cried incessantly. What caused her illnesses. She died because she'd swallowed a pin, yet before her death no one knew the extent of the internal damage.

Afterward, Helen's mother, Adelaide, becomes reclusive. Henry angry. One of the world's wealthiest people, he had begrudged his daughter's suffering. His worship of Martha was, in part, based on his anger with himself about not having found a cure. About having been angry with the child for being ill. And then realizing the cause.

Helen, considered not as pretty or clever or wanted as her older sister, has to figure out a life path in a family that doesn't treasure her. The cameo containing the Magnolia Diamond is of Martha. Before it is stolen, Helen selflessly wraps the cameo in her dead father's hand, wanting him to have the comfort of Martha when he is buried.

One of the subtexts of Ms. Davis's book? "Even with all their money, the [Frick] family had been afflicted by tragedy that reverberated down the generations. Martha's death had made them all their worst selves: Mrs. Frick fragile and ill, Mr. Frick cruel, their son desperate to cause trouble, and Miss Helen far too eager to please."

The dour, cantankerous Helen Clay Frick dedicates her life not only to her father's legacy, but also to embracing art history. She would consecrate a major New York City art museum. She would create the very first art resource library. She would establish important repositories of her own art collection in museums, while buttressing her devotion to other manners in which to consecrate art history. She had to fight her entire life, often against family members, to accomplish her goal of loving, preserving, understanding art. "The Magnolia Palace" performs a great service in highlighting the extraordinary achievements of a long-underestimated art world figure.

Hilary Mantel, whose much-lauded Thomas Cromwell fictional trilogy began with "Wolf Hall," once wrote: "If we want added value — to imagine not just how the past was, but what it felt like, from the inside — we pick up a novel."

P.S. One of the Frick Collection's treasures is Hans Holbein's "Portrait of Thomas Cromwell."

Lou Ann Walker, who lives in Sag Harbor, is executive editor of TSR: The Southampton Review, published by the M.F.A. program in creative writing and literature at Stony Brook Southampton and Manhattan.

Fiona Davis is a summertime visitor to Sag Harbor.