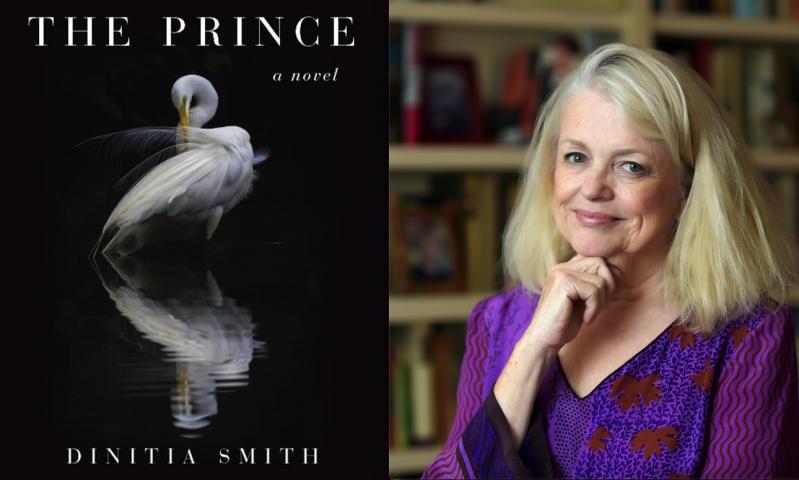 What an extraordinary challenge the novelist Dinitia Smith has given herself in writing "The Prince." By choosing Henry James's last major novel, "The Golden Bowl," as the inspiration and the underlying pattern for much of her book, she sets a sky-high bar for herself.

In James's novel, impoverished Prince Amerigo meets wealthy innocent Maggie Verver. They marry and are happy. Until it becomes clear that his former paramour, Charlotte Stant, is still very much in love with him. And Maggie Verver is still very much attached to her father, Adam Verver, even after her father marries Charlotte. At Maggie's urging. But how was it that Charlotte, a childhood friend of Maggie's, never mentions to her friend that she and Prince Amerigo had an affair?

Such a simplification of James's complex story of adultery and upper-class intrigue, but Ms. Smith's approach retains the moral quandaries, the manner in which James had characters withhold information for complicated reasons — in some ways out of kindness, in some ways out of fear. For some out of self-preservation. Truths are so hard to come by in these worlds. But these ethical dilemmas of James's work are so worthy of exploration today.

Ms. Smith names her Italian prince "Federico." He falls in love with wealthy, naive Emily Woodford, and Emily dotes on her loving father, Henry. Who will be the spoiler? Christina, Emily's childhood friend, who had, indeed, an affair with penniless Prince Federico in Italy. Christina never recovered from that breakup and when she re-enters Federico's life the week of the wedding, he does everything he can to quell Christina's intense feelings for him.

For some reason Christina, whenever she had communicated with her old friend Emily, never got around to telling her who she was dating in Rome. She didn't mention the former relationship even after she received the wedding invitation. Federico can't bring himself to tell Emily about the affair that preceded their courtship.

Ms. Smith handles the 117-year differences between the two novels as to how the world functions in extremely clever ways. This novel opens with a prenup that Prince Federico signs before his marriage to Emily takes place. Although legal documentation will reverberate later, the tone between future father-in-law and son-in-law is so very civil. But it's the way that Ms. Smith navigates the digital world that is central to this story. Texts, computers, televisions are subtle background in "The Prince."

However, at critical points in the narrative she moves the characters to Woodford Island — a.k.a. Gardiner's Island between the North and South Forks. The 3,300 mostly undeveloped acres owned by a private family where there is very little in terms of modern technology, reachable only by boat, is a perfect backdrop. This claustrophobia drives the novel, increasing the tensions between the characters.

Emily has gently convinced Federico to quit his sinecure at a bank because they don't need the money — they live in a grand house in Manhattan with plenty of family trust funds — and she wants him around to help her with their baby, Isabella. Transported to such an isolated place, Federico faces his destiny.

"But more than ever, in the vacancy and vastness of the island, the realization swept over him that he had no skills, no talents. Nothing was going to come of [his rock] band — in fact they'd 'disbanded' for the summer mainly because Federico had to leave the city for the Woodfords' island."

Once Emily and Federico have a child, Isabella, Federico, a devoted father, continues to remain aloof from Christina. But Emily's goodness induces her to invite Christina to Woodford Island. When Emily and Federico are forced to leave the island because of his mother's illness, Christina and Henry look after Isabella while Henry tells her of the art museum he's building in West Virginia.

"And then Henry Woodford had come into [Christina's] life in an entirely new way, with a sudden clarity. He was no longer just the kindly father in the background when she visited Emily in the house in Westchester." Emily is supportive of her art-loving, widowed father when he proposes to Christina.

Ms. Smith ingeniously substitutes a different, even more fragile, and more symbolic object for that gilded bowl. Before Federico's wedding, Christina persuades him to go shopping for a wedding gift that she can present to Emily. They stroll Madison Avenue and happen upon a door to a second-floor antiquaire. The owner, Mr. Gamal, shows them an eight-inch cloudy vase with a narrow neck, "shot through with a green and gold light." He tells them that it's a Roman relic from the second century that was found in Egypt. He explains that scholars call it an unguentarium, used for oil or perfume, buried in tombs to serve in the afterlife. Other experts claim it's a lachrymatory, "used at funerals to catch the tears of mourners."

Although Christina can't afford it, Federico also dissuades her from the purchase because there is a tiny crack in the glass. Of course that left-behind beautiful but imperfect object will make a dramatic reappearance in this carefully sculpted novel.

Discovering the adultery between Federico and Christina — the inevitability is built carefully throughout the book — Emily is infuriated, and lashes out, attacking the sacred object. "Cruelty, a new thing for her. An art she ought to master, a necessary weapon. She was grimly proud of herself."

Christina insists on cloaking herself in righteous indignation. "Through clenched teeth, Christina [says to Emily], 'You mean I'm bad? The two of you [Henry and Emily], it's always been the two of you together. Now he's going to be with me.' As if that were the real issue."

It is Henry's wisdom that prevails, however. Trained as a lawyer he keeps his own counsel yet moves the players the same way he will move paintings in his museum.

Dinitia Smith's endnote is touching in its sincerity: "This novel is intended partly as an homage to Henry James. I've borrowed some of the storyline and the structure from his greatest work, 'The Golden Bowl.' I hope he will forgive me."

Indeed, forgiveness is at the heart of "The Prince."

Lou Ann Walker, who lives in Sag Harbor, is executive editor of TSR: The Southampton Review, published by the M.F.A. program in creative writing and literature at Stony Brook Southampton and Manhattan.

A Conference for Young People to Create Solutions
Get Outside, Get Moving
Two Traditions, One Fair in Springs
END_OF_DOCUMENT_TOKEN_TO_BE_REPLACED