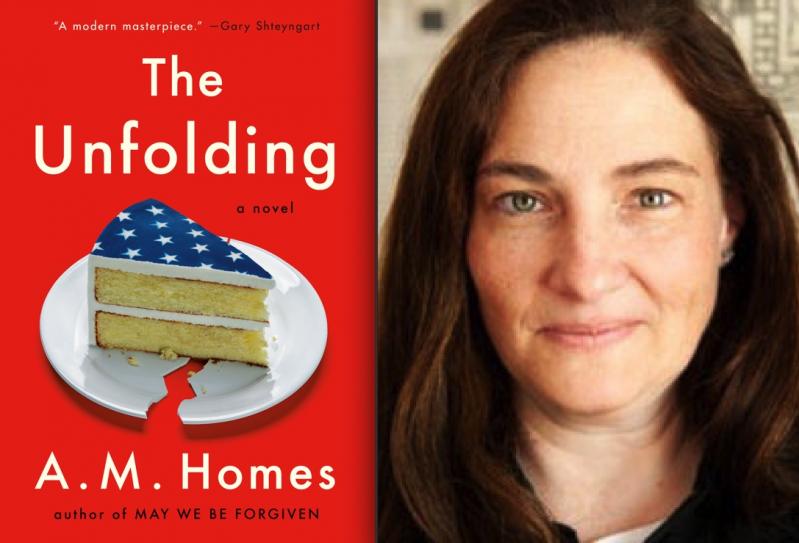 Here's why. Fiction though this novel may be, it is no fiction as to what is going on in our country. How did we get to this red and blue firing line? When I was growing up in the long-ago post-World War II world, Republicans and Democrats were more or less congenial neighbors. Differences yes, debate certainly, but lies, fantasies, grim and desperate conflict? No.

Just as most of us were glued to the recent elections, so opens A.M. Homes's riveting novel "The Unfolding." Chilling, funny, scary are also words that come to mind. It is 2008 and Barack Hussein Obama has just been elected the 44th president of the United States. While millions cheer, dancing in the streets in celebration, not so our main character, known only as the Big Guy, a rich, white, die-hard Republican for whom the election of a Black man to the White House is a major traumatic event. It goes beyond racism, signaling to him the beginning of the end of an America that is meant to be run by, well, rich, white Republicans.

This very basic tenet of American life has been breached and the Big Guy plans to do something about it. And what he plans brings this novel, a satire of sorts, into a dark place indeed. But Ms. Homes brilliantly feeds her readers with characters and situations of fine-tuned satiric observation so that the sting of this fiction is not quite so painful as the realness of the world we live in.

"The Unfolding" is also a family saga opening on the Big Guy with his wife and daughter in Phoenix in anticipation of a celebratory win for their chosen candidate, John McCain. Meghan, who has flown home from boarding school in Virginia to vote for the very first time and who admires her glad-handing father, and Charlotte, the dutiful wife though reluctant partygoer (save for the steady flow from the drinks table), stand around the high-rollers cocktail party looking at the crowd.

Her mother takes a piece of celery from a crudité sculpture. "Have this, it'll keep you occupied and away from the —"

Her mother smiles. Penis nuts. That's what her mother calls communal bowls of nuts. There are things one teaches a young girl: never eat the penis nuts. Men don't wash their hands after they use the facilities. They sink their paws into the nuts while they're waiting for a drink. If you must eat, take something that's sticking straight up, celery, a cheese stick, a carrot, but god forbid, don't dip it into anything; that's the other weak spot, double-dippers.

Both Charlotte and Meghan, introduced as mere satellites to the Big Guy, are poised to reinvent themselves as the story unfolds. Charlotte, a clever, intriguing, and most extraordinarily articulate alcoholic, soon departs for the Betty Ford Clinic. And Meghan, returning to Virginia, finds the first of many hidden truths ahead for her while riding her horse in the woods near her school. Years prior another student was murdered there, and learning this Meghan feels "the threat of outside forces." Had she known about the murder she might not have taken her own chances at being alone in those woods.

"Indeed," the wise headmistress says. "That is the question. Does knowing empower or inhibit? . . . One wants to believe that there are systems in place that protect us; but, in fact, we are all a little more on our own than one might realize."

All that Meghan believes to be true, all that her father has led her to believe to be true now begins to come into question. Meghan is a smart young woman and she handles her father in ways that sometimes belie her years. Yet it will be Charlotte, newly recovering from addiction, who voices the solid truths to the inner workings and subterfuge of power-seeking politicos.

As his family begins to disintegrate, the Big Guy is actively pulling together a strange cabal of manic thinkers with deep pockets of dark money to further his plans to regain the God-given rights of wealthy, white American males. No brief review can color in these nefarious characters, but they are fascinating, relentless, and alarmingly all too real. Ms. Homes is a master of dialogue, and these gents deliver with snap and crackle their disturbing thoughts and jibes over extravagant meals, hunting expeditions, and the links.

"The Unfolding" has been called prescient, and it is. Foreshadowing the discontent of today's America, Ms. Homes sets the novel in the two and a half months between Obama's election and his inauguration. As we know, that election was monumental on so many levels, but here we are some 14 years later wondering if it unleashed some hidden nationalist fury. Did it create a climate in which attacks on the nation's Capitol and front-running candidates who deny invincible truths are given front-row opportunities?

Ms. Homes has said the book took form before Trump was a serious presidential player and developed out of an awareness that the political establishment on both sides of the aisle was losing connection with a large segment of the American people. And those very people, the average Joes, were prime fodder for the power seekers.

"Whether or not I care about Joe is irrelevant," the Big Guy says. "We need to harness the power of Joe; there are millions of Joes in this country; we need to bring Joe into the fold.  And if Joe doesn't know the difference between number one and number two, that's fine — we just have to tell him what to think. We remind him that in America democracy is capitalism, guns, and lower taxes. Because Joe is the one who is going to get the work done."

Chaos, the cabal concludes, will bring Joe into the fold, and the Big Guy, even as his wife turns away and leaves him, and his beloved daughter figures out the double-edged sword of truth, cannot stop fanning the flame for a new America:

"There will be a seamless transition unfolding in the corridors of power, a slow turn to the right that no one sees coming. In the name of what it means to be an American, we will spearhead the development within the military and outside it, of separatist soldiers who believe that they are following the true wishes of their leaders culminating in the erosion of civil liberties under the guise of protection. This combined with the withering of official law enforcement, economic setbacks, and failing infrastructure will become part of the picture that coincides with a period of economic, social, and political unrest; the destabilization in this country will give rise to rogue nonpoliticians."

There is no resolution to this story, but it compensates with sharp prose on the debate over how the hope of significant change in our country got pushed off the rails into the riots of today.

It has been said, if you want to know the facts, read nonfiction. If you want the truth, read fiction. So again I say, read this book.

Genie Chipps Henderson's last novel, "A Day Like Any Other," set in East Hampton, tells a story of the Hurricane of '38. She lives in Springs.