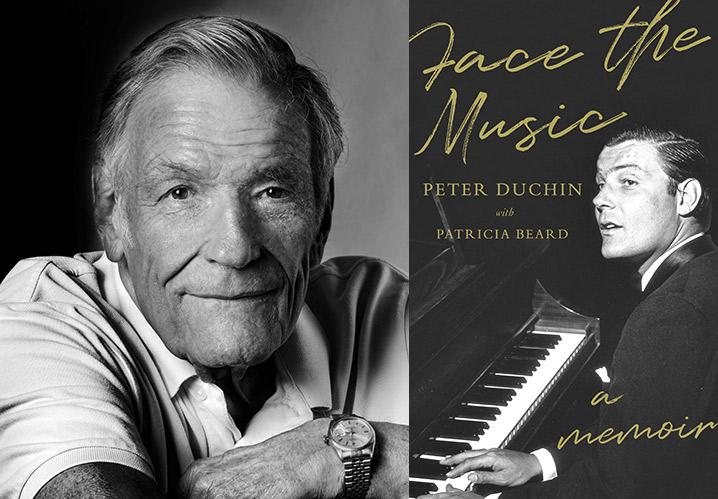 Few books open with an image of the author with his pants down in front of a crowd lining up to visit the Frick. Maybe for the famed pianist and bandleader Peter Duchin, encounters with other New York musicians might be more expected. After all, he knew the pianist Don Shirley, the subject of the Oscar-winning movie "Green Book," and the renowned conductor and composer Leonard Bernstein.

At a fall dinner celebrating a new documentary about Bernstein, Mr. Duchin recalled the infamous night when the Black Panthers came to cocktails chez "Lenny" at his wife, Felicia's, invitation. Tom Wolfe of New York magazine coined the term "radical chic," sensationalizing a civilized meeting, according to Mr. Duchin, by suggesting that the artistic elite was slumming among the anarchists, condoning violence. Mr. Duchin was there, and knew firsthand.

With conversational nonchalance, he segued to his upcoming memoir featuring many such stories, plus — gasp — an account of his recent stroke and bout with Covid-19 in the earliest stage, which left him in the hospital on a ventilator for 47 days. Chock-a-block with anecdotes of a life well lived making music in high society, the memoir, "Face the Music," a collaboration with Patricia Beard, the noted nonfiction author, glimpses a glamorous past filled with legendary personalities, juxtaposed with the isolation and humbling of a debilitating stroke and long stint with the virus du jour. The combo of the divine and mundane should not work, and yet it does.

With humor and charm, on the page as he is in person, Mr. Duchin, a part-time resident of East Hampton, is good company, especially — full disclosure — as this reviewer was recovering from surgery. In that, he achieved his goal, to encourage others to soldier on. Recovery was a point of departure. Catalysts for the book are the photographs of his parents taken by Cecil Beaton, which were in his room when he returned from the hospital to heal. For the first time — and unlike the motivation for his first memoir, "Ghost of a Chance," more of a "road" book written 25 years ago — he wanted to find out more about them, how they met.

Researching, he learned that she, Marjorie Oelrichs Duchin, was a beautiful, beloved socialite, and he, Eddy Duchin, a part-Jewish bandleader, was playing at the Central Park Casino, at the 72nd Street transverse. They met on the dance floor. For the upper crust, this was not a match made in heaven. She was removed from the New York Social Register.

She died following childbirth, having Peter, and with Eddy touring all the time, good friends, the Averell Harrimans — yes, those Averell Harrimans — took charge, seeing to his education and upbringing. A lucky break, right? To be raised in prominence and wealth at the New York governor's estate, a student at Hotchkiss and then Yale. He got to see his father from time to time, and then Eddy died of leukemia when Peter was 12. Many know this story from the 1956 biopic "The Eddy Duchin Story," starring Tyrone Power as Eddy and Kim Novak as Marjorie.

You might consider "Face the Music" a poster book for what it means to live a life of privilege, the exposure to culture, politics, people, and its Side B, the music to face: human frailty that hangs over happier times. Mr. Duchin followed in his father's career in 1962, as a bandleader at the fashionable La Maisonette in the St. Regis. If Eddy played more romantic music, Peter's preference was jazz. As he puts it, his was the last era when bandleaders could be called celebrities.

Of course, memoirs are all about what one remembers, the mind being a selective instrument. In Mr. Duchin's case, and in pursuit of finding out about the father he knew so little, he tells of women who came to him at the piano insisting that they knew, really knew Eddy. He brushes off these callous socialites. If he was hurt or cared, he makes light of it. One such was Dorothy Lamour: "We had a very good time," she says, leaning into his piano. This time he wants to know, and his curiosity becomes a punchline.

Standout stories abound: living on a barge in Paris during a semester abroad from Yale, befriending George Plimpton and the editor Robert Silvers, the mischief young men make. A night out at the opera with Audrey Hepburn, not knowing the blind date his godmother had sent him on was with the actress. Finding Kim Novak in Central Park as she was shooting the biopic about his dad and teasingly calling her "Mother." You might wish for personal data. If more than friendship ensued with these stars, he's too much the gentleman to tell.

One day he got a call from a squeaky-voiced client with a Southern drawl swearing him to secrecy. They'd met at Plimpton's. Truman Capote wanted Mr. Duchin to play his Black & White ball at the Plaza, and absolutely no one was to know of it. As Mr. Duchin tells it, even those who were working it had to be the sort who would be invited. Truman worked hard to cultivate the divide between those "in" and "out." Asked to wear masks, invitees had specially made, elaborate couture ones, while Truman wore a "thirty-nine-cent black Lone Ranger mask from the toy store F.A.O. Schwarz," and gave Peter an identical one.

Fun fact: The event gave rise to a new kind of party reportage, as CBS did live coverage from the ball. Mr. Duchin illuminates the ironies: Tallulah Bankhead took home a cute younger man who turned out to be Truman's doorman. For Mr. Duchin, welcome in any inner circle, this "party of the century" was no different from many he worked.

Yet he is not just another handsome face. He studied literature with the great Harold Bloom at Yale, and must have absorbed some of the storytelling art, having co-authored two mystery novels. Here he writes about Peter Beard, a fellow Yalie who provides a neat dramatic arc. Seeing him after he had his stroke, Mr. Duchin writes, "You never know whom you'll run into in the hospital."

He launches into a story about Beard, a great photographer and adventurer who swam with crocodiles in Kenya. When he went missing in Montauk, Mr. Duchin observes, "I'd like to believe that, when Peter knew he was nearing the finish line, he walked off to die alone, like one of the wild animals he knew so well." Still so fresh in our memories, Beard was local news. Mr. Duchin offers a sensitive look at an illusory figure who occupied the last house on the highest cliff on Long Island and whose demise rocked Montauk in the spring of 2020, a sad distraction as we all went deeper into lockdown.

In the end, this reader was grateful to be transported to a bygone era, reminded of a glamorous world when the famous actually had talent beyond creating fame, even if they bleed like you and me.

Regina Weinreich is the author of "Kerouac's Spontaneous Poetics," editor of Kerouac's "Book of Haikus," and co-producer/director of "Paul Bowles: The Complete Outsider." She lives in Manhattan and Montauk.