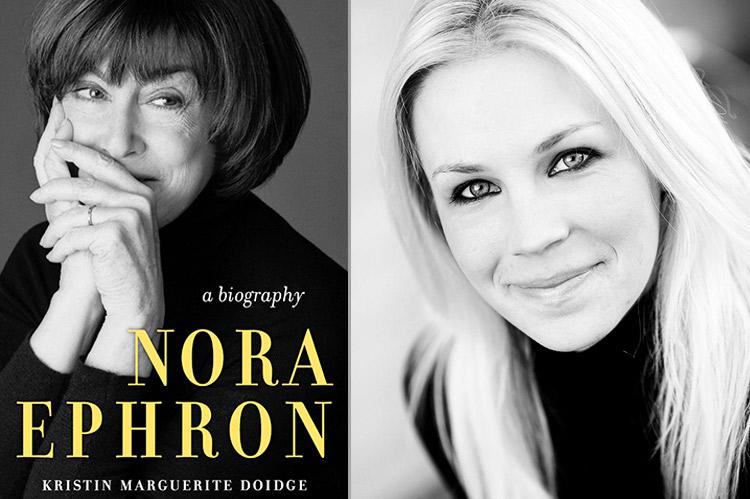 Let me tell you about the very creative and successful. They are different from you and me. They may struggle, at the beginning of their careers, to find their metier or their voice, but once success arrives, subsequent endeavors can fall into place more easily for them. That is because of the other successful, influential people who enter their sphere. At the same time, the creative and successful work incredibly hard, knowing that the next triumph is never guaranteed.

Those are the overarching impressions one takes from Kristin Marguerite Doidge's recent work, "Nora Ephron: A Biography," which provides a highly readable portrait of Ephron, the prolific novelist, essayist, playwright, screenwriter, and filmmaker whose death, in 2012, brought to an abrupt end a career that had shown no signs of slowing down.

The baby girl born on May 19, 1941, in New York was blessed with a fair measure of good luck. She did not have to overcome great odds or adversity in order to grow up to be Nora Ephron. The eldest of four daughters whose parents were established playwrights and screenwriters, Nora was raised in Beverly Hills, where she graduated from high school before going on to Wellesley College.

Her first job was in the Kennedy White House, on the staff of Pierre Salinger, the press secretary. Having always aspired to be a writer, she worked for five years as a reporter for The New York Post and for nearly two decades as an esteemed columnist and associate editor at Esquire. In what feels like short order and a logical progression, she came to write books, plays, and screenplays, which in turn led to her being a successful director and producer of movies. Her prolific output includes such highly acclaimed films as "Silkwood," "When Harry Met Sally," "You've Got Mail," and "Sleepless in Seattle," along with many other easily recognized titles.

In addition, Ephron was almost disarmingly smart and clever (not the same thing), widely admired by legions of fans, and genuinely loved by a wide circle of notable friends. Who wouldn't love someone who declares, "You can never have too much butter, that is my belief. If I have a religion, that's it"?

No life, of course, is without its challenges and low moments. Ephron's parents both became serious alcoholics, damaging her relationships with each of them. Her relationship with Delia Ephron, the sister with whom she often collaborated, was occasionally fraught, though ultimately loving and supportive. She married and divorced twice, before entering a 25-year marriage with the author, screenwriter, and producer Nicholas Pileggi that became an enduring love affair.

Especially moving is Ms. Doidge's treatment of Ephron's final six years, when she refused to disclose a serious medical condition to all but a few intimates, out of fear that doing so would imperil support for what she was then working on, or planning to work on, next. Her final movie was "Julie & Julia," a 2009 comedy-drama based in part on a memoir by Julie Powell, a New Yorker who set for herself the goal of preparing, in 365 days, all 524 recipes in Julia Child's seminal cookbook "Mastering the Art of French cooking." (Powell, portrayed in the Ephron film by Amy Adams, died on Oct. 26 at her home upstate. She was 49.)

Ephron could have been the poster child for the timeless admonition by teachers of writing to "write what you know." She was expert at mining her own life for material. "Everything is copy," she liked to say. Perhaps the best-known example of this practice is "Heartburn," her novel, and later the screenplay, based on her marriage to and divorce from her second husband, the journalist Carl Bernstein, but it is far from the only one.

If there is a shortcoming to the fleshing out of Ephron's life story, it is perhaps that there is not more description or summary of at least certain of her works. Plenty of readers may have read or seen them all, but many others have not. Since Ephron's life and her novels and screenplays were so intertwined, more attention to the works could only have strengthened this well-researched book (which is based on Ms. Doidge's master's thesis at the University of Southern California).

Literary biography can be tricky. In general, we seek to read about the lives of celebrated people. That can include the authors of our favorite books or films. The catch is, however, that those authors' lives are not always intrinsically interesting, and rarely as absorbing as the books and movies they have written. (The rare exception may be Hemingway, whose life was arguably a more engaging tale than many of his novels.) Ms. Doidge's work will no doubt be appreciated by Ephron's friends and by aficionados of her work. Ultimately, however, no biography can do Nora Ephron better justice than her own extraordinary creative output. People will be talking about her books and movies long after they cease discussing her life.

I would be remiss if I neglected to mention a production issue with this book. Although the volume contains a generous quantity of candid photos from throughout Ephron's life, the quality of these photos is nearly unfailingly poor. Whether that is because of the original snapshots or because they are not printed on glossy paper, as is often done, the result is a letdown. It's difficult to imagine that Ephron herself, who had a keen eye and lofty standards, would not be slightly disappointed.

Nora Ephron had a house in East Hampton.