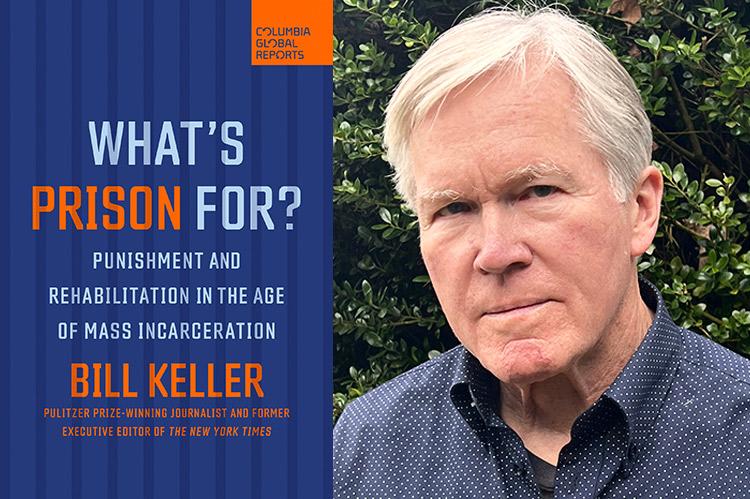 This small volume is a plea for reform of our troubled prison system. It documents the problem and offers alternatives to both the volume and the methods of incarceration in the United States.

In our present political environment, divided and obsessed with social crimes and retributions of all kinds, the fate of the incarcerated is, unfortunately, not a hot topic. But in "What's Prison For?" Bill Keller, the founding editor in chief of the Marshall Project, a nonprofit news organization that covers criminal justice in the U.S., shows us that it should be a hot topic and why.

"Our incarceration rate per 100,000 population is . . . roughly twice that of Russia's and Iran's," and, compared to other countries we consider our peers, "five times England's, six times Canada's, nine times Germany's, and seventeen times Japan's." Today there are 1.4 million persons in prison in our country, "including the mentally ill who now make up a substantial portion of inmates in state prisons and county jails."

Four and a half million are on parole or probation. They are frequently reincarcerated "because a parolee can be returned to prison for technical infractions such as missed appointments or traces of drugs in a urine sample," Mr. Keller writes. "The supervised society is a precarious place."

At the crux of the issue is the tension between the relative importance of punishment versus rehabilitation. It seems to me that in a rational world, rehabilitation is in the greater interest of society since it offers a pathway to reduced crime, as documented here in examples including Germany and Japan. However, that is not where the accent falls in America. Why?

Mr. Keller cites a number of reasons: political ploys like "wars" on crime and drugs, accused people jailed for their inability to pay cash bail, prosecutors rewarded for getting convictions, parole infractions, and, of course, cost. Rehabilitation is more expensive than punishment — in the short run.

He quotes Jeremy Travis, former president of the John Jay College of Criminal Justice, "who has spent decades steeped in the evidence-driven, data-based study of crime," saying we should ask questions like what's the right thing to do? What meets the test of human dignity? What's consistent with our democracy? Sadly, or I should say tragically, Mr. Keller attests to the fact that none of these questions are addressed constructively in our society, not by politicians, not by the public.

The author enumerates "four main purposes" of prisons: "punishment (society evens the score), incapacitation (putting criminals where they can do no harm to the general public), deterrence (a warning to the tempted that there will be consequences), and rehabilitation (preparing offenders to be law-abiding citizens)." The first two of these purposes are amply satisfied in our system, but the value of deterrence is questionable, while rehabilitation programs are extremely rare despite evidence that they can substantially reduce recidivism.

"What's Prison For?" includes a chapter titled "What's Race Got to Do With It?" Rather than taking on this big subject here, I will just cite one point made to explain increasing rates of incarceration: Quoting Bruce Williams of Columbia University, Mr. Keller writes, "Mass incarceration flows along the lines of social and economic inequality. It's a system that concentrates all of its efforts on low-income communities of color."

With rare exceptions, our prisons are the ugliest and cruelest environments in our society — the "privatized" ones operated for profit being, not surprisingly, among the worst both for the inmates and those paid to control them. "The intractable problems posed by prisons are not rooted in the identities or characters of officers or inmates. The problems are much more fundamental. They are rooted in the nature of the goals prisons are erected to serve."

Ana Daniel, retired from business consulting and academia, regularly reviews books for The Star. She lives in Bridgehampton.