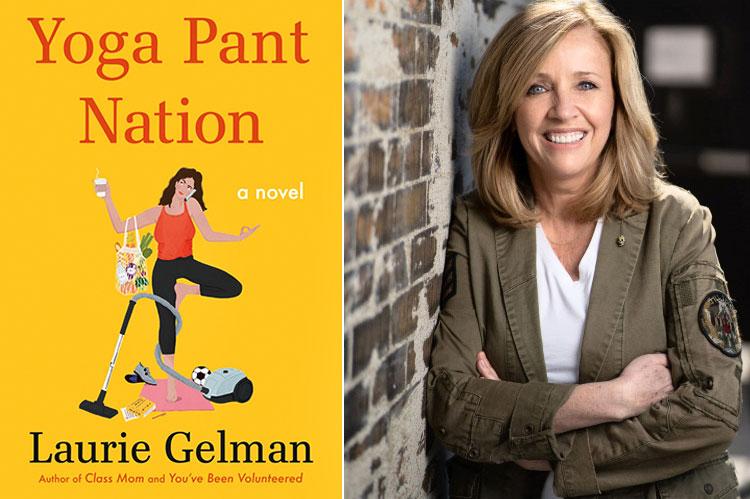 It is a truth universally acknowledged, that any mother who dares to head the school's PTA, could just as effectively turn around the G.N.P. of a third-world country.

Such is the case with Jen Dixon, the heroine of a trilogy of novels by Laurie Gelman, a part-time Water Mill resident. Starting with "Class Mom," through "You've Been Volunteered," and now the latest, "Yoga Pant Nation," Dixon wields her power through snarky emails, spin classes, skilled matchmaking, and adroit parenting choices, all the while clad for exercise.

Ms. Gelman claims to have written the novel during the pandemic, and this fashion choice — the "I give up" pants — is perhaps Covid-influenced, hence the book's title.

So armored ("They're comfortable. Every woman I know wears them"), Jen faces challenges including a near-lethal carbon monoxide leak, Cindy, the vengeful, nuts ex-wife of her husband, Ron, and the Indian mother of her granddaughter's birth father, Raj, this last one offering the highest dramatic stakes: Will the elegant and charming Varsha, who has made her way to middle America, succeed in taking the beloved, adorable, 2-year-old Maude to India?

(Spoiler alert: "Yoga Pant Nation," in lockstep with the other novels, has a happy ending.)

Predictability aside, this fast-paced book is not without its sly setups. Chapter One starts with this image: "Shirleen Cobb is hovering behind me like Trump at a debate." Wow, that stopped me for a moment, to wrap my mind around the memory of ill-fated Hillary onstage at the mike — all that panicked claustrophobia encapsulated in the sentence.

But this is not a televised presidential debate: It's Jen in her domain, her kitchen, and she's about to be bamboozled into heading up the William Taft Elementary School fund-raiser, the trilogy's overriding conceit, its the-lady-doth-protest-too-much refrain.

With the help of her committee, WeFUKCT (We Fundraise Until Kingdom Come Team), Jen, "world beater" that she is, you guessed it, kills it; the fund-raiser is the best ever, as a result of a totally unexpected celebrity deus ex machina.

Yes, Jen must explain every time the acronym is said out loud, even by cute Maude, that the unsayable is meant to be used only in emails. Well, you ask, if it's only used in emails, how would the toddler even hear it? That's the running joke, get it? Ms. Gelman pushes hard for a familiar brand of comedy. Jen's parents are called Kay and Ray. Need I say more?

Still, Ms. Gelman has an eye for the zeitgeist: Insecure about teaching her spin classes, Jen is elated by a round of enthusiastic applause after one session as she masters her technique, using just the right play list, from Bette Midler's "The Rose."

"I was right about the crowd. These are the people I should be teaching — mostly women around my age who appreciate music from another generation. Only one thing knocked me off my game: a, shall we say, 'rotund' guy in the second row who started class in a sweatshirt and sweatpants, then gradually disrobed until by the end of class he was only wearing a wrestling-style unitard. It was gross and fascinating all at the same time, kind of like watching the Kardashians."

This same crowd will like this book. With its lite characters and relatable predicaments, "Yoga Pant Nation" succeeds as caricature, a fun beach read as many anticipate — and maybe even long for — the next hands-on school year.