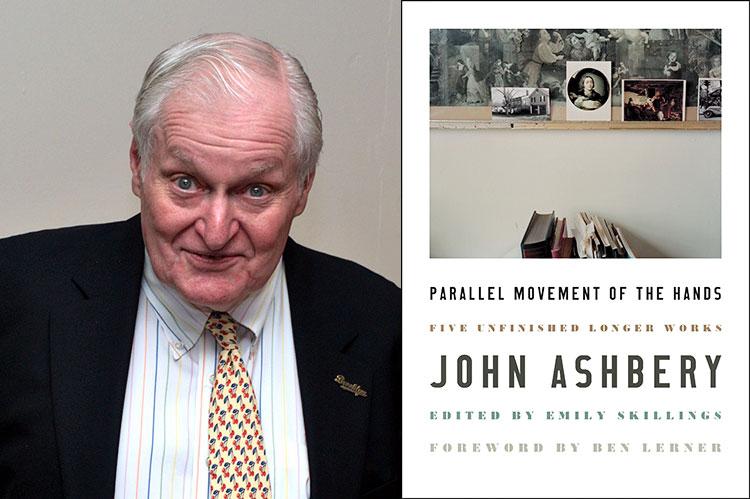 Only an aficionado of John Ashbery's extraordinary creations would be able to appreciate a collection of the poems and essays he'd toyed with, toiled over, for more than a decade, but then didn't publish.

At least that's what I thought when I opened "Parallel Movement of the Hands." Yes, Ashbery was the winner of the National Book Award, a Pulitzer, the Ruth Lilly Prize, a MacArthur. But the Poetry Foundation's biography of him notes: "Although even his strongest supporters agreed that his poetry is often difficult to read and willfully difficult to understand, many critics also commented on the manner in which Ashbery's fluid style conveys a major concern in his poetry: the refusal to impose an arbitrary order on a world of flux and chaos."

And then there are the photographs of the acclaimed poet looking distinctly eagle-like. I was deeply intimidated.

These were unfinished works a prolific poet who was known for being "obscure" hadn't sent out to the world. However, what was soon revealed to me by Emily Skillings, the editor of this volume, was a far deeper understanding of Ashbery's process and what mattered when embarking upon the poetry and prose. "I am often asked why I write," Ashbery once mused, "and I don't know why — I just want to."

Ms. Skillings became John Ashbery's assistant shortly after graduation from college, in 2010. An accomplished poet herself, she would go on to obtain an M.F.A. from Columbia in 2017, the year of Ashbery's death, and has taught at both Columbia and Yale. In a sense Ms. Skillings is our Beatrice, following leads, guiding us through the poet's vision. The commentary is considered, thoughtful, erudite without ever being condescending.

The theme of the "unfinished" frequently arose in Ashbery's work over his lifetime, and Ms. Skillings is well aware of contradictions he presented, as well as of the responsibility of an editor to clarify and to get everything absolutely right. In the role of guide, she consults archivists, former Ashbery assistants, librarians, and Ashbery scholars, as well as the poet's husband, David Kermani, who was a caretaker of his literary career for decades.

Ms. Skillings's own prose is accessible, even while explicating complicated points, and she is careful in not exposing work that the artist didn't want revealed. "I am keenly aware that posthumous publications of unfinished works are a complicated subject in literature." She consulted many friends of Ashbery's estate and "arrived at the conclusion that these projects — at once artifacts of a career and exciting, ekphrastic works — deserved to be seen by both seasoned Ashberians and new readers of his poetry."

"I don't look on poetry as closed works," Ashbery once said. "I feel they're going on all the time in my head and I occasionally snip off a length."

Frequently Ashbery was sending Ms. Skillings off to see artworks and report back. She experienced a frisson when attending the Met Breuer exhibition "Unfinished: Thoughts Left Visible" — art from the Renaissance to now paired with finished paintings. Ms. Skillings writes about the finite and "non finite" and draws a parallel between these visual works and words on the page. "Because we know [the poems] are unfinished," she writes, "we are invited to look into Ashbery's process and inhabit the pleasant open-endedness of these works."

In addition to scholarly notes, Ms. Skillings also slips in anecdotes. Within the enormity of "The Kane Richmond Project" poems, a collection that Ms. Skillings writes could have become its own full-volume poem, Ashbery includes "Miss Otis Regrets Land's End."

"We went to America, we didn't see what they were doing there. They don't drink pop. Too, I was a bride in the Thirties. B. Cellini meets A. Toklas. No, but I was going to wish him a happy Wednesday anyway. What if the ship sank? Would all this have gone on anyway? Medford or Medfield Oregon. The forest of siblings. Of sleep, a brunch. Dancin' when you're done. Molto confortabile, he suggested. And that's not nice! Country knockers! Is it . . . a Broadway melody?"

The 1934 Cole Porter song "Miss Otis Regrets" was a favorite of Ashbery's, and he and British poet Mark Ford often made references to the song in their bantering emails, underscoring their mordant senses of humor and delight in word play. Once, Ms. Skillings was typing a message for Ashbery to send to Ford and admitted not recognizing the reference to a woman who shot her cheating lover, had been caught, and then, awaiting execution, has to ask her butler to tell a visitor: "Miss Otis regrets she's unable to lunch today." Ashbery "asked me to look it up online, and I played it for us. He sang along gloriously."

In "The Art of Finger Dexterity," a 2007 group of poems with titles such as "The Passing of the Thumb," "Light Articulation in Half-Staccato," and "Clarity in Velocity," there is one poem that is shorter than its title that broadcasts Ashbery's particular turn of mind:

Throughout, Ms. Skillings points to the knowingness underlying his every word. Here is one of my own favorite Ashbery observations that somehow makes him less intimidating for readers as he comments on this world of flux and chaos: "There is the view that poetry should improve your life. I think people confuse it with the Salvation Army."

Lou Ann Walker, who lives in Sag Harbor, is director of the M.F.A. program in creative writing and literature at Stony Brook Southampton and Manhattan.

John Ashbery began coming to Southampton in the 1950s.