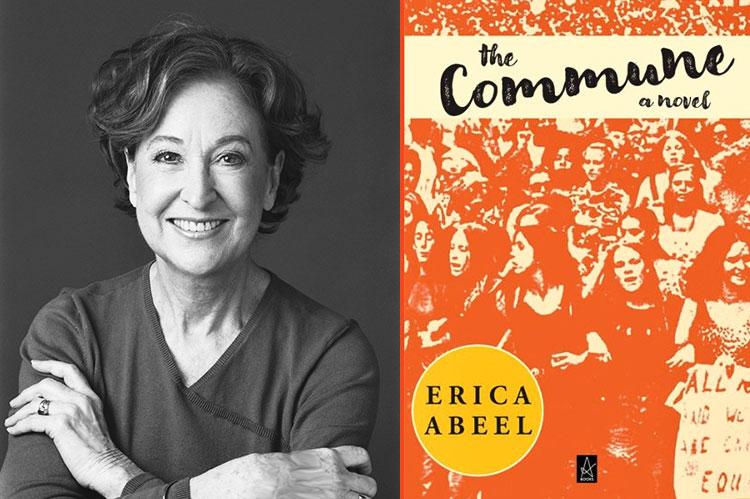 If the summer crowds are too much for you, come retreat to the bounds of a trusted reading spot and contend, at a literary arm's length, with eminently recognizable personages of the past.

Erica Abeel's novel "The Commune" takes place over the course of the summer of 1970, during the wind-up to the historic Women's Strike for Equality in New York City, an action that was timed to celebrate the 50-year anniversary of the passing of the 19th Amendment and the enfranchisement of (many but by no means all) women in the United States. Fictionalized figures from the era, as well as places and publications, promenade through the pages of Ms. Abeel's unapologetic, even gleeful roman-a-clef.

The book is set on the South Fork in the town of Islesfordd in a many-storied house on Cormorant Cove, home to the commune, a group house rented by writers and intellectuals, and also populated by various sidekicks and wannabes. Gilda Gladstone (a stand-in for Betty Friedan, "mother of the feminist movement," author of "The Feminine Mystique," and co-founder of the National Organization for Women), holds court, planning the Women's Strike and lamenting the lesbian "lavender menace" that encroaches upon her pinnacle of power in the women's movement.

Elsewhere at the commune, someone plays the organ on an upper floor, someone else nurses an extreme preoccupation with media attention, and they all play high-falutin literary charades, trying to stump one another with words, expressions, titles that are impossible to act out (e.g., "Tractatus Logicus" by Ludwig Wittgenstein). Meanwhile, sexual power is currency, and status in the literary world and New York press scene is practically everything.

Enter Leora Voss, in hot pants and a good idea of how to wear them, who made a bid for freedom and nonconventionality in her 20s, then married, had children, divorced, and has turned up at the commune desperately wanting in at the cool kids table, yet also in search of a man to deliver her from the privation of being an underemployed single mom. Oh yes, and also she's plotting a novel. It's about the commune, and it features a key character patterned after none other than herself: "The character would also be an aspiring scribbler, who in turn is writing about a writer struggling to join the commune, in a receding hall of mirrors, Escher-like, a seemingly infinite construction. . . ."

References to "The Great Gatsby" abound and the plot thickens with the presence, across the pond, of a fabulously wealthy but boorish man from Leora's past. More literary allusion crowds in through Leora's preoccupation with "the marriage plot," Jane Austen's young lady meets rich man, and they marry, end-of-story storyline. Ms. Abeel gives herself plenty to work with, spinning out a failed summer fling, a major twist of fortune, and even a who-done-it subplot in service to the metafictive writing of the very novel the reader holds in his, her, or their page-turning hands!

Referred to as "communards," the residents of the commune are unspared by satire that goes lengths for a laugh, with running gags that verge on the predictably repetitive. The narrative slips in and out of frequent interior monologue from the point of view of many in the cast of characters, a device smoothly handled by Ms. Abeel, though it is used to cement the points of satire rather more than to deepen or dimensionalize the characters.

It's a fast read, a fun read: Ms. Abeel knows her way around a sentence, turning it wry with a bit of sparkle, a sense of joy in the delights of polished, well-rounded satire.

She offers a historical roman-a-clef, where the thinly veiled prominent figures of the feminist movement are rather lowcut, tight-fitting, and scantily clad, emphasizing the irony of second-wave feminists who had not yet, or perhaps simply not, shed the behaviors and attitudes of more conventional women, specifically behaviors and attitudes related to men. Mapping Gilda Gladstone onto Betty Friedan, Ms. Abeel concocts a man-chasing, growling harpy, catty and competitive when not front and center as Liberator in Chief, all theory and no heart when it comes to other women, especially those who present a threat to her romantic conquests or her status.

Ms. Abeel's rollicking yet carefully irreverent party of a novel threatens to reduce the second-wave feminist movement to a collection of egos, ambitions, and abstractions. Yet the work harbors relevant questions on what sort of promise the political movement toward gender equality has actually delivered. There's a sense of invitation here, for readers to locate themselves in the complexities of feminism, then and now; we are offered a cast of characters positioned at all cardinal points and those in between, from the radical to the uninitiated, to the posturing, to the hapless. "Where do you stand?" the novel appears to jovially ask.

Another 50 years has passed since the historic Women's Strike for Equality described in "The Commune" — an opportune moment for the publication of the book, and surely not an accident. These days, if you are not pondering the state of the world, you really just are not living. Betty Friedan's legacy remains in our environs; her gravesite can be found in a cemetery at the edge of Sag Harbor, marked by a handsomely designed headstone that bears the inscription, "If not now, when?"