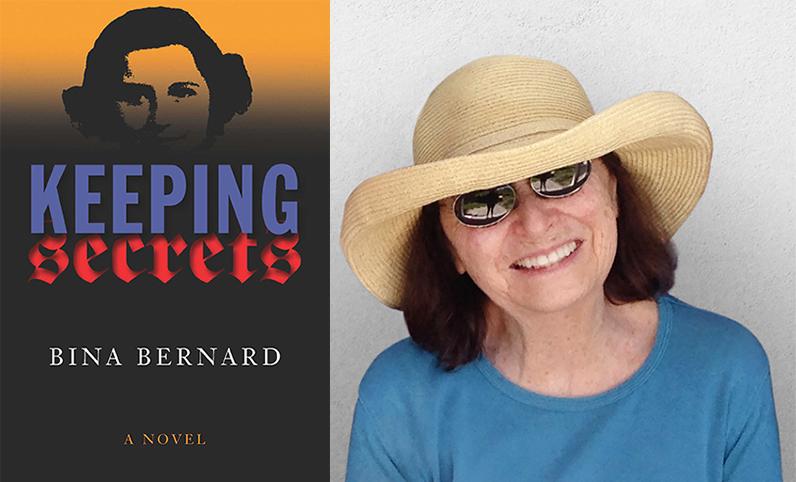 When Eva Lavi, the youngest person saved from the Nazis by Oskar Schindler, addressed the United Nations in 2020, she said, "I feel guilty I survived." Similar expressions of guilt pervade Bina Bernard's wrenching debut novel, about a Polish Jewish couple's desperate struggle to protect their children during the Holocaust.

Eva Lavi had two heroes: Schindler and her own resolute mother. In "Keeping Secrets," the young daughters of Hershel and Malka Stein depend on their determined and resourceful parents to keep them safe.

The Steins devise separate plans for the two little girls. Four-year-old Lena, who has her mother's blond hair and blue eyes, and could "pass easily as a Gentile child," is taken by Hershel, a physician, to the ostensible haven of a Catholic orphanage. She clings to her father's thumb all the way there. Armed with fake travel permits, he introduces himself to the Mother Superior at the orphanage as Dr. Bronislaw Bielinski, knowing that he is "an actor in a dangerous drama." He tells her that Lena is the daughter of a deceased patient, and that someone in the family will come back for her after the war is over.

"Just for a while forget about us," Hershel instructs Lena. The girl — not quite comprehending, but obedient — promises to keep the secret about her true family, and her father promises to return for her as soon as he can.

In the meantime, he must pay off blackmailers who threaten to expose his real identity, and make complex arrangements to safeguard the rest of his family. Hannah, little more than a toddler when Lena is sent away, has the Star of David on the chain around her neck replaced with a small gold cross. She learns to say Christian prayers, and how to kneel and cross herself in church. Like Hershel, she and her mother have new names. Hannah is "reborn as Zofia Nowakowska" and Malka becomes Marta Wilakowa.

Their relationship is fabricated, too. Marta, reinvented as a single, childless woman working as a housekeeper for a family in Warsaw, is now Zofia's aunt. And Hannah/Zofia will temporarily live with strangers, a condition more staggering to her than having to hide her Jewish heritage. "Don't you want me anymore?" she asks her mother.

The novel, which goes deftly back and forth in time and between points of view, opens with a prologue, subheaded "Poland, January 1945." Hershel Stein has returned to the orphanage to retrieve Lena only to discover that she isn't there, and that no one knows where she is. He's told that all of the children had been moved out years before, and their records destroyed in a fire. "I'm sure she was placed in good home," the Mother Superior offers — cold comfort to Hershel — as she ushers him out.

Flash forward to 1976 and New York City, where Hannah, married to an architect, is working as a staff writer at a weekly magazine. Her parents, "Americanized" now as Harry and Molly Stone, live in the city as well, and it's quickly established that Hannah's relationship with her father, who is ailing, is fraught with tension. He's long denied her the fatherly affection she craves. She never seems able to please him, and arguments between them spiral.

Molly alternates between complaining about Harry and defending him, while trying to ease the friction between her husband and her daughter. ". . . Molly's role was to keep Harry and Hannah from killing each other."

When Harry's health worsens, he reaches out to Hannah, confessing that he's withheld affection from her because he feels so guilty about abandoning his older daughter. He asks for Hannah's forgiveness, and explains why they finally had to leave the country after searching in vain for Lena. "The Russians liberated Poland from the Germans, but the end of the war did not mean an end to anti-Semitism. It was still open season on Jews in Poland in 1945."

Hannah has never been told about Lena's existence before this, and has no memory of ever having had a sister. Her first response is fury that this vital information had been kept from her, but as Harry becomes frailer and more open about the past, they start to reconcile, and he implores Hannah to find out what happened to Lena. It's an assignment she's reluctant to accept at first, but that gradually becomes her sacred mission.

As Hannah begins her research, Lena Malinska (née Jankowski, née Stein) — a widowed Polish physician and a devout Catholic — embarks on her own quest to find her biological family. She has only recently learned of her Jewish roots, unwelcome news to her 12-year-old son, Stefan. Decades after the war, they are still living in a rampantly anti-Semitic society. When Lena's mother-in-law reveals that she, too, is Jewish, she says, "Being Jewish in a country that doesn't like Jews is difficult. It's safer to be a Jew in private."

Lena doesn't remember Hannah any more than Hannah remembers her, and all she can recall of her father is the thumb she clutched on the way to the orphanage. A letter, a box of jewelry, and a handful of photographs serve as meager clues for the two sisters as they urgently try to find each other. Their separate stories seem to be on parallel tracks that will never intersect, and the suspense builds at a lively pace.

Other plot points — Hannah's faltering marriage, her infertility, and Harry's drawn-out decline — have less energy, and aren't as compelling as the novel's central concerns: the reunification of a family separated by the menace of genocide, and the reverberating horrors of the Holocaust itself. The most poignant moment occurs in a Jewish cemetery when Lena's son, Stefan, notices the Star of David engraved on tombstones, and says, "All the people buried here are Jews? There are so many of them."

Like Hannah, Bina Bernard was born in Poland and worked as a reporter at a popular weekly magazine, and in an epigraph she writes that the novel is "shaped by actual events." Readers are often curious about possible autobiographical details in works of fiction, but it really doesn't matter as long as a story or novel feels genuine, and both the historical and emotional content of "Keeping Secrets" have the sting of truth.

Hilma Wolitzer and her husband had a house in Springs for many years. A collection of her short stories, "Today a Woman Went Mad in the Supermarket," will be published this summer. She lives in New York City.

Mashashimuet Park's History and Future
A Conference for Young People to Create Solutions
Get Outside, Get Moving
END_OF_DOCUMENT_TOKEN_TO_BE_REPLACED