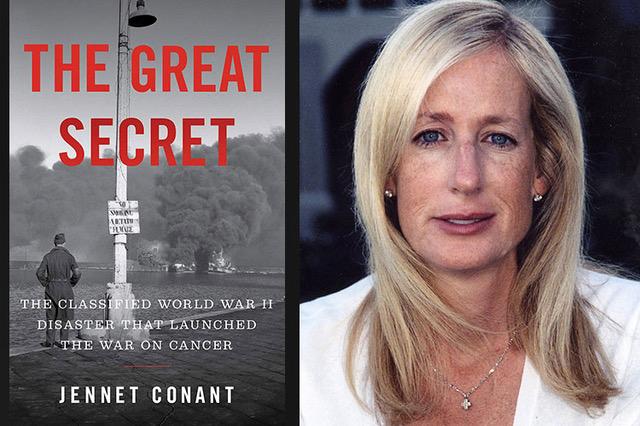 Jennet Conant's "The Great Secret" is about many things: the chaotic nature of war, the subterfuge of governments, the randomness of scientific discovery, the story of one unassuming young American doctor, Stewart Francis Alexander, and more.

The central event is a surprise German bombing raid on the harbor at Bari (Puglia, Italy) on Dec. 2, 1943, which exploded a secret cargo of American-made mustard gas with devastating consequences for the many men exposed to it.

The author agrees with Rick Atkinson, who wrote in the first volume of his masterful three-volume history of World War II in Europe, "An Army at Dawn," that "the extent of th[is] catastrophe . . . remained obscure" until 1971, when it was revealed to the public in a book by a former bomber pilot, Glenn B. Infield.

Secrecy about the existence of mustard gas weapons was dictated by the fact that in 1925, combatants on both sides of World War I had signed a protocol in Geneva "which banned the use, but not the possession, of chemical and biological weapons," Ms. Conant writes. The assumption was that whoever started using it would invite retaliation in kind by the other side with disastrous consequences well understood from the experience of the war.

At first, most (but not all) of those present on Dec. 2 in Bari thought the gas had come from the German bombers, but it was soon discovered that the source was an American freighter, the John Harvey, which had exploded in the harbor along with 16 other ships and had been secretly carrying "540 tons of hundred-pound American mustard gas bombs." There were many deaths, and survivors remained ignorant of the contamination that might bring them long-term complications.

Sent to the scene from Gen. Dwight D. Eisenhower's headquarters in North Africa, a 29-year-old lieutenant colonel — and chemical weapons expert — Dr. Stewart Alexander heroically pursued the causes and consequences of the men's exposure to the mustard gas in the face of official denials and evasions. He kept meticulous records and studied them deeply so that eventually his findings would inform protocols for dealing with future exposures and, unexpectedly, the course of medical science.

Ms. Conant's account of this is gripping, and a memorable portrait of Dr. Alexander emerges from the telling.

The matter of secrecy, particularly on the part of the British, who controlled the Allied port of Bari, was a two-edged sword. For strategic reasons, as mentioned above, knowledge by the enemy could precipitate retaliation in kind — although we learn in retrospect that the Germans did know of it — while on the other hand withholding that knowledge from the doctor seeking to treat the victims seems criminal.

The very denial for decades by both British and American governments that mustard gas was involved in this incident seems almost absurd and driven by fear of bad publicity. Since the end of World War I, mustard gas remained the symbol of the evils of war until the atomic bomb replaced it in the public imagination.

Up to this point, Ms. Conant's book is a wonderful read. About two-thirds of the way in, she changes the subject, or, more precisely, follows a thin thread linking Bari to Memorial Sloan Kettering Cancer Center and Dr. Alexander to the cure for cancer. He had observed and noted in his reports that the men who had been exposed to the mustard gas — many of whom died from it — had experienced marked drops in their white blood counts. He wondered at the time whether this could mean that mustard gas could be used to treat blood cancers whose symptoms included a rapid increase in white blood cells, and noted this in his reports, which were sent to several institutions and research doctors.

After the war, Dr. Alexander retired to private practice in New Jersey. All mention of mustard gas as the cause of the illness and deaths at Bari had been expunged from the records by official edict.

The shift in subject matter occurs on page 201, where we read, "Unknown to Alexander, [Dr. Cornelius P.] Rhoads had every reason to be excited by the Bari report," and the remainder of the book concerns Dr. Rhoads's search for a cancer cure and the beginning of the Sloan Kettering Institute for cancer research, including the roles of Alfred P. Sloan, chairman of General Motors, and Charles F. Kettering, the head of GM research, in its creation.

It is interesting material worth reading about, but it sits — for this reader at least — in awkward relationship to the first part of the book. Deeply researched, it could, in fact, be the subject of a separate volume.

Jennet Conant's writing has the virtue of describing complex technical information lucidly and directly so that we come away with a clear understanding of why Dr. Alexander's observations were useful to Dr. Rhoads and other cancer researchers. And that is her point, I think.

She closes with a short kind of coda to tell us that Dr. Alexander's contribution was finally recognized in 1988 through the efforts of a high school student, Nicholas Spark, who was researching Infield's book for an essay contest and reached out to Dr. Alexander for clarification. Feeling that the doctor was an unsung hero, Nicholas lobbied two senators to get recognition for his new friend.

By then in his mid-70s, Dr. Stewart Francis Alexander received a certificate of recognition from the surgeon general of the United States.

Ana Daniel, who has a Ph.D. in modern European history, is retired from teaching and business. She lives in Bridgehampton.

Jennet Conant's books include "Man of the Hour: James B. Conant, Warrior Scientist." She lives in Noyac and New York City.