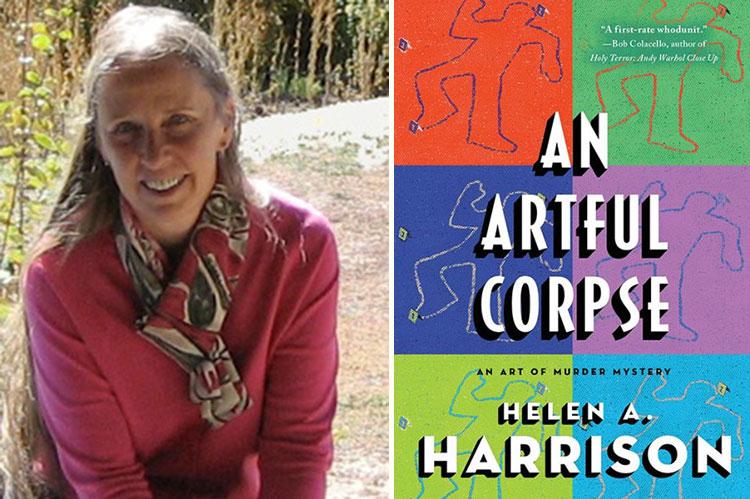 Helen A. Harrison
By Lisa Kombrink

When I walked past the trinity of arched windows on the second floor of the Art Students League on West 57th Street in Manhattan, at age 20, I knew something important went on inside that building. It could have been the elaborate metalwork at the entrance door, or the single works of art displayed solemnly inside each large window along the wide sidewalk. Little did I know, though, that the studio on the top floor would be the scene of the crime in Helen Harrison's "An Artful Corpse."

Against this backdrop of the real and the imaginary, she profiles the everyday lives of several characters intent on finding the killer of the American muralist Thomas Hart Benton, stabbed with a decorative dagger, wrapped in sheets, and arranged on a model's platform at a League painting studio. (Ms. Harrison explains in her acknowledgements that Benton was not, in fact, murdered in New York as imagined, but that he died in his art studio in Kansas City, Mo.)

The author creates an engaging main character in TJ, a sophomore at John Jay College of Criminal Justice who also takes life-drawing once a week at the League. In art class, he meets and befriends Ellen, who becomes his first serious love interest. When one of their classmates is wrongfully suspected of Benton's murder, they begin their search for the real killer as their relationship develops.

TJ receives support in his sleuthing from Hector Morales, a forensic psychology professor who mentored his mother, and from another artist taken from real life, Alfonso Ossorio, a close family friend who has encouraged TJ's interest in art. TJ also appears to have inherited his mother's intuitive and deductive skills, as well as her ability to pick locks (TJ, unbeknownst to his mother, borrows her collection of picks, hooks, other unlocking tools to enter the apartment of the suspected killer).

Ellen and TJ's detective work gives Ms. Harrison an opportunity to explore New York scenes in the late 1960s, such as the antiwar protests at Washington Square, draft card burnings, and the offices of the War Resisters League and the Peace Center, where activists helped men travel to Canada to avoid the draft. These activities come into sharper focus when Ellen and TJ's art school friend Bill has an argument with Benton before his death in the League cafeteria over the war, burns his draft card, and then disappears. Ms. Harrison describes the network of people who help Bill, a young gay man, cross the border in a process known as "fairy dusting."

Ellen and her roommate serve as the vehicle for Ms. Harrison to bring other New York institutions to life. First, the author recalls the Horn & Hardart Automat on West 57th Street, where Ellen works as "nickel thrower" and students and League professors enjoy the 50-cent hot dishes of macaroni and cheese and baked beans.

Beyond the Automat, Ms. Harrison expands her observational skills to New York's music and art scenes. To do so, she places Ellen's roommate as a waitress at the Bitter End, where the two sometimes perform. Ms. Harrison recounts one legendary evening at the club when Bob Dylan, Arlo Guthrie, Mary Travers, Pete Seeger, and other music greats gathered onstage to pay tribute to Woody Guthrie, who had died that afternoon.

The fictional characters also meet some of the art world's glitterati, including Andy Warhol and his entourage. Ms. Harrison drafts a young N.Y.P.D. detective, Angelo Valentino, nicknamed Sheik, to visit Warhol's workshop, The Factory, to investigate a run-in between the murder victim and the group at the Whitney Museum. Sheik dresses for the occasion in black Levi's, harness boots, turtleneck, and black leather motorcycle jacket.

The author recreates the freewheeling atmosphere at the loft, set with a few rickety wooden chairs, large red sofa, table with Bell & Howell movie projector, and a pay phone. Sheik meets and assists Warhol with a silkscreen and jokes with a kimono-clad Candy Darling as she is coiffed by Billy Name. While at the loft, Sheik learns that Valerie Solanas, "the founder and only member of the Society for Cutting Up Men, acronym SCUM," had words with Benton. Sheik then visits the Chelsea Hotel, where Solanas lives, which provides the author with another opportunity to share the city's unique history.

Ms. Harrison recounts Max's Kansas City, where Warhol claimed a large table in the back room as his own. Ellen and TJ arrange for a table nearby, in hopes of learning more information about Solanas, who has become a suspect. As the two are criticized as looking "a little on the square side," Ellen's roommate helps them don "hipper clothes" for their outing -- a black lace mini dress from Fred Leighton on Macdougal Street for Ellen, and a flowered blouse and colorful plastic beads for TJ.

Ms. Harrison incorporates several memorable turns of phrase, including a New York City medical examiner described as "Sherlock Holmes with a microscope," and a man drinking at a bar who "bent his elbow." She also shares the details of a John Jay College forensic analysis class, such as how to identify a murderer among a group of suspects: motive, means, and opportunity.

As usual, this reader refrained from trying to solve the whodunnit, and instead enjoyed TJ and Ellen's easy subway rides along the Seventh Avenue Line, walks near Union Square, and ventures to the city's famous Village music clubs, which seem much more accessible in Ms. Harrison's tale than this frightened Midwestern transplant imagined at age 20. In the end (without spoilers), the killer emerges as one among many with a motive, since, as Ms. Harrison notes of the victim Benton, "His talent for making enemies was legendary, even more widely acknowledged than his artistic ability."

Lisa Kombrink has taken part in the Ashawagh Hall Writers Workshop and others through Canio's Books. She lives in Southampton Village and manages Southampton Town's community preservation fund.

Helen A. Harrison is the director of the Pollock-Krasner House and Study Center in Springs. She lives in Sag Harbor.

Mashashimuet Park's History and Future
A Conference for Young People to Create Solutions
Get Outside, Get Moving
END_OF_DOCUMENT_TOKEN_TO_BE_REPLACED