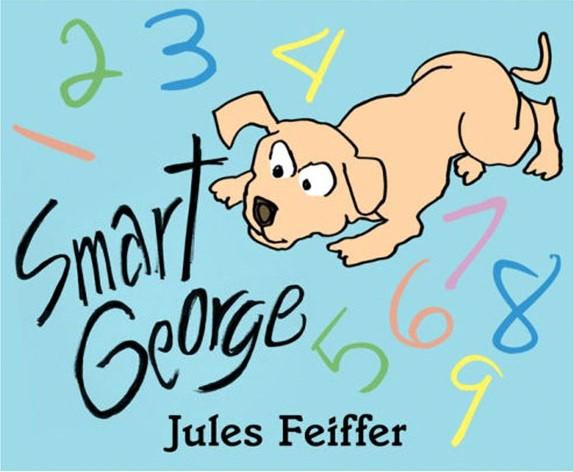 The man’s over 90 years old. For God’s sake, you can indulge him his eccentricities.

What’s funny about Jules Feiffer’s new picture book, “Smart George” (Michael di Capua Books, $17.99), is not that it follows up “Bark, George,” from 1999, which he has called his most successful kids’ book, but rather that he said he hadn’t finished with the character, a willful, disobedient puppy.

That’s right, like Richard Ford, bringing back his near-doppelganger Frank Bascombe to explore suburban American life in “Independence Day” years after his star turn in “The Sportswriter.”

Mr. Feiffer loves George. Fair enough. He’s cute, feisty, tawny. Twenty-one years ago, for the life of him he could not bark like a proper dog should, which led to a trip to a veterinarian and a spectacle of disgorged animals that played off the soft-pedaled horrors of the old folk song “I Know an Old Lady Who Swallowed a Fly.”

Now the inveterate nonconformist is being urged by his mother to learn to count. George rejects the dull, rote lesson. Yet when he naps, he dreams of nothing other than numeration among psychedelically colored trees, which nag him as much as his mother ever did.

Mr. Feiffer, who lives on Shelter Island, has lost none of the charm of his sketchy and fluid style of illustration. If he’s become sketchier still, reminiscent of the unsteady lines of Charles Schulz late in his “Peanuts” career, his work remains full of life, his faces consistently betraying the animated shock of surprise or excitement.

In his dream, George is rejoined by the bestiary from the previous book for a friendly reunion, before awakening to a reconciliation with his mother. They go for a walk in the treeless city, the little guy counting out the front stoops of brownstones. Say goodbye, George. 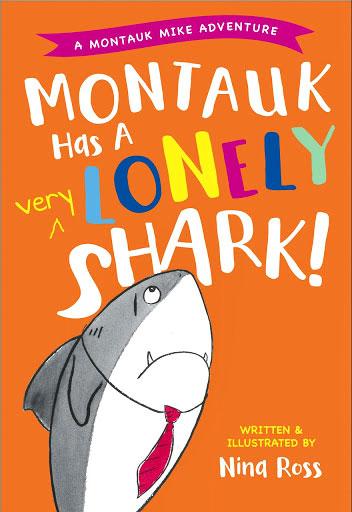 “Montauk Has a Very Lonely Shark”

He sports a tie as red and nearly as long as The Donald’s. But this is a different kind of shark.

Montauk Mike is back. In Nina Ross’s new one (East End Press, $14.95), our hero is a mopey, teary sad sack with a fin but no friends. Everyone’s afraid of him. He tries to entertain himself with a collection of discarded cellphones, which is one of the sadder details I’ve encountered in a book at any level.

Mike searches for a figure from his past, a girl in a pink dress, and it comes to pass that he is helped by a fat little bird called Sparrow. More of a scarlet tanager, really, given his coloring. The tie comes into play because it makes up the entirety of Mike’s disguise as he ventures onto dry land, the interesting part being his brush with the world-famous Big Duck of Flanders, who, made of concrete, cannot answer him.

Listen, don’t worry about Mike. Just take solace in the fact that when Sparrow repeatedly tweets, it’s actually coming from his beak. 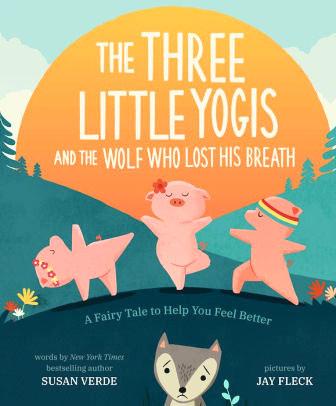 “The Three Little Yogis and the Wolf Who Lost His Breath”

“Includes calming exercises,” boasts the jacket flap of “The Three Little Yogis and the Wolf Who Lost His Breath” (Abrams, $16.99). And does it ever.

In this timely take on the “Three Little Pigs” fable, an agitated Canis lupus has lost his mojo, or at least his ability to topple structures with puffs of breath worthy of Superman. One by one he chances upon the yogi piggies, and each takes the time, or rather a long paragraph, to instruct him thoughtfully in soothing breathing practices. On top of that, the author’s note at the back of the book offers a full page of exercises for kids to try at home, from Bumble Bee Breath to the Butterfly Pose.

Adorably illustrated by Jay Fleck, an artist out of Chicago, this is the work of the prolific East Hampton children’s book author Susan Verde, who has been down this road before, loosely speaking, with “I Am Yoga.” I recently heard the Amagansett children’s librarian extol her empathy, and it is on full display here as, remarkably, each pig seeks to help the wolf even as he tries to destroy their domiciles simply to exorcise his angst.

“The wolf was startled; no one had ever actually asked him that question before.”