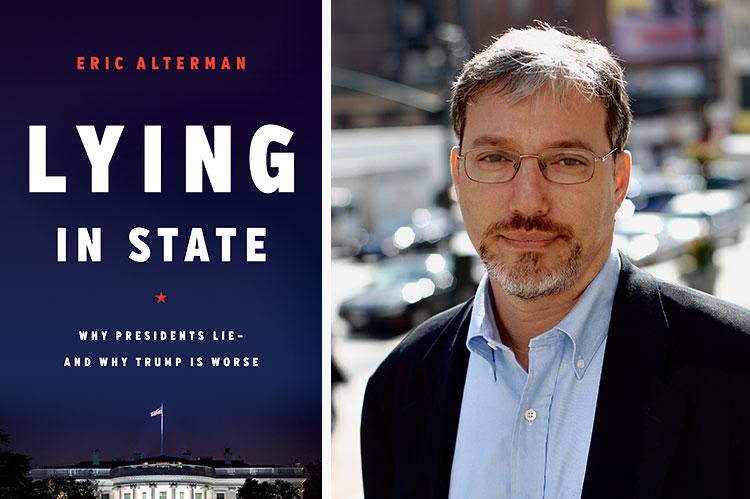 It may be an open question, today, as to who will be the president of the United States on Jan. 20, 2021. Consequently, the last four years may or may not be remembered as the nadir of presidential honesty.

“We’re turning the corner” and “we saved two million lives,” President Trump says incessantly, as coronavirus infections soar to record highs. “They found 50,000 ballots in, like, a river” (no, “they” didn’t). And last summer the president advanced a new racist “birther” lie, this one about Senator Kamala Harris, who was born in California.

Donald Trump is by far the most egregious liar ever to reside in the White House, but he is hardly the first, writes Eric Alterman in “Lying in State: Why Presidents Lie — and Why Trump Is Worse,” a kind of American history textbook for our unsettled times. But where presidents once lied to further specific policy goals and were often tacitly excused for it, truth is meaningless to Mr. Trump, who may not even understand the concept of it, Mr. Alterman writes.

The presidency of Donald Trump is less anomaly than logical conclusion, many pundits argue, the natural result of a political party unmoored from reality and a citizenry long saturated with conservative talk radio, Fox News, and, perhaps most alarmingly, the internet-driven proliferation of conspiracy theories as exemplified by QAnon, which would have you believe that the president is, in fact, battling a global cabal of Satan-worshiping pedophiles running a child sex-trafficking ring. There’s a sucker born every minute, someone once said, but the American voter circa 2020 is uniquely susceptible to a hustler from the worlds of, say, New York City real estate, or so-called reality television.

Mr. Alterman said that researching the book brought home a fuller understanding of how deeply entrenched the idea of white supremacy was in the United States, and that the need to support that belief drove policy through the 1970s. The lies of George Washington and Thomas Jefferson were related to slavery, he writes. Successors, including John F. Kennedy, lied about their health. But the rise of America as an empire, and the Cold War, necessitated more and more and more lies, a majority now in the service of national security.

Chapters devoted to each president from Franklin D. Roosevelt to Mr. Trump reveal all manner of causes and conditions in which they and their subordinates lied, and lied, and lied, Richard Nixon providing the only example to come anywhere near Mr. Trump’s duplicity. There are Dwight Eisenhower’s lies, often through surrogates, about the Central Intelligence Agency’s overthrow of democratically elected governments in Iran and Guatemala, and the Soviets’ 1960 downing of an American U-2 plane in the Ural Mountains.

There is Kennedy’s deceit about “his horrific health issues; his incautious connections to organized crime; and his almost-impossible-to-believe sexual shenanigans” as well as “the poorly planned Bay of Pigs invasion of Cuba” readied by his predecessor. There is the “credibility gap” of Lyndon B. Johnson, the first president “to be viewed by the majority of Americans as a habitual liar” over the war in Vietnam. There are, of course, Bill Clinton’s lies about a sexual relationship with an intern.

But then a funny thing happens. In the chapter on Barack Obama’s tenure, Mr. Alterman calls out the president’s statement that “if you like your health care plan, you can keep it” in the context of the Affordable Care Act, noting that the statement was the website PolitiFact’s “Lie of the Year” despite it being accurate for 98 percent of the population. Mr. Alterman clearly leans left, and he seems to relish turning the tables here, devoting ample pages to the omnipresent “propaganda feedback loop” — the right-wing echo chamber of Fox News, Rush Limbaugh, Alex Jones, and the ocean of junk science pushed by Charles and David Koch, owners of an almost $100 billion fossil-fuel-based fortune.

A Koch-directed network of donors, anonymously funded shell groups, think tanks, and other advocates “worked tirelessly to undermine public confidence in academic and government climate-change scientists,” Mr. Alterman writes, “through character assassination and the selective and misleading use of purloined documents.” And, with the conservative media’s eager assistance, “the Republican Party’s turn toward a strategy of deliberate deception would turn out to be the most significant political development of Obama’s presidency.”

In hindsight, Sarah Palin was a harbinger, mixing outright fabrications with open appeals to prejudice and fear as the Republican Party’s candidate for vice president in 2008. She alienated many Republicans in her losing effort against Mr. Obama and his running mate, Senator Joe Biden, but electrified many others. In fact, she and Mr. Trump, both testing the waters for a presidential run, were united in promoting the lie that Mr. Obama was not born in the United States.

“He’s not just throwing stones from the sidelines,” she said of Mr. Trump in 2011, “he’s digging in, he’s paying for researchers to find out why President Obama would have spent $2 million to not show his birth certificate.” (Spoiler alert: “Palin’s office,” according to The Washington Post, “did not respond to two requests asking where she got the $2 million figure.”)

The fervor Ms. Palin inspired is even stronger among Mr. Trump’s supporters, his impeachment, a surging pandemic that has killed some 232,000 Americans, and more than 65 million claims for unemployment insurance notwithstanding.

In assessing the present, Mr. Alterman assigns plenty of blame to Fox News, where Rupert Murdoch and Roger Ailes initially feared that Mr. Trump would sink the Republican Party’s effort to recapture the White House but threw their full support to him when they “could not help but notice the ratings boost that Trump-centric programming was causing over at CNN.” More credible media is also chastised for its long reluctance to use the word “lie” in coverage of the president’s thousands upon thousands of falsehoods.

Hand in hand with that reticence to call the president a liar are his “ceaseless attacks on the news media,” which “would prove a central theme of his presidency.” The president, Mr. Alterman writes, openly admitted his strategy to CBS News’ Lesley Stahl, “saying, ‘You know why I do it? I do it to discredit you all and demean you all so when you write negative stories about me no one will believe you.’ ” And to cheering supporters at one rally, one of his most unnerving lies: “What you’re seeing and what you’re reading is not what’s happening.”

And here we are, a presidential election very feasibly turned raw power struggle amid swirling claims of fraud and disenfranchisement, suppression and intimidation, and perhaps lethal violence, perchance finally resolved in an ugly and ruthless courtroom death match.

Or worse. As one of the vanishingly rare presidents remembered for honesty told Congress early in the Civil War, “We shall nobly save, or meanly lose, the last best hope on earth.”

Eric Alterman is a columnist for The Nation and a professor of English at Brooklyn College. He has a house in East Hampton.

Trees, Wreaths for Sale in Amagansett
Holiday Cheer Is Coming to Sag Harbor
Even More Thanksgiving Options From the Pike and Old Stove
END_OF_DOCUMENT_TOKEN_TO_BE_REPLACED