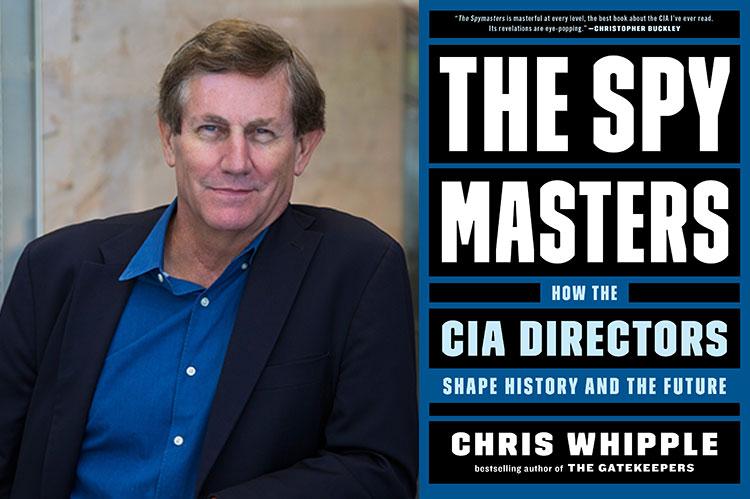 An award-winning producer of TV documentaries, Chris Whipple has lately gone back to build on them, doing additional research and in-person interviews with key officials for richly textured and well-received volumes that he then speaks about with appealing verve and insight for TV broadcasts, webinars, and Zoom presentations.

His only difficulties seem to be with timing and Donald Trump, actually two sides of the same unlucky penny.

Mr. Whipple's 2017 book, "The Gatekeepers: How the White House Chiefs of Staff Define Every Presidency," came out just as Mr. Trump dumped his first CoS, the former Republican National Committee chairman Reince Priebus, for a conveyor belt of replacements. And Mr. Trump alone still defines or, more accurately, characterizes his time in office (from churlish rallies and debates to the defiantly careless contracting of Covid-19).

Now comes "The Spymasters: How the CIA Directors Shape History and the Future," after Mr. Trump has spent much of his term ignoring or, worse, deriding the nation's intelligence community over North Korea's nukes, Russia's election interference, and likely pandemics (Covid-19 in particular, but only in public, as Bob Woodward's recordings of the obviously well-informed president in private now make plain).

So, again, Mr. Trump may be the exception that proves the rule this volume underscores: That spymasters (like White House chiefs of staff) must tell presidents truth they don't want to hear, though unable to make them act on it, and always there to take the fall for failure. As one former director tells the author: "A president would never abolish the CIA because then he would have no one to blame."

Richard Helms, the sleek Philadelphia Main Liner who ran agents in occupied Europe for the Office of Strategic Services and went on to serve as top spy for Presidents Johnson and Nixon, "personified the CIA" in the 1960s and '70s, and, Mr. Whipple learned, disliked the moral ambiguity and "gray compromises" of intelligence as novelized by David Cornwell (a.k.a. John le Carre). But this book is full of telling tales that demonstrate a frequent congruity of fact and fiction.

"At CIA you get into moral ambiguities more than you do in other agencies,” a veteran C.I.A. analyst, Charles Allen, admits. "And there are high-risk stakes, particularly as you move into covert action" — including torture-like "enhanced interrogations" and assassinations, nowadays with all the potential collateral damage inherent in bomb blasts and drone strikes.

Many of the triumphs, tragedies, and turf wars (most recently with the new director of national intelligence) will be familiar to those who follow such matters. But Mr. Whipple provides a trove of new details and insights from an astounding "cast of characters," as he calls them, including all still-living directors (except both of Mr. Trump's), hard-charging field operators, and scholarly analysts. (The joke at the C.I.A.'s Langley, Va., HQ: "An extroverted analyst stares at your shoes.")

Several critical themes emerge. The first, that even C.I.A. successes can lead to disaster, so-called "blowback." The second, that a president can simply ignore unwanted intelligence, prevent it from being gotten, or conjure his own.

In Iran, for example, the C.I.A.-supported coup against the democratically elected President Mohammed Mossadegh in 1953 (under Director Allen Dulles and President Dwight Eisenhower) reinstalled Shah Mohammad Reza Pahlavi. He was for decades thereafter such a critical Cold War ally that Nixon and Henry Kissinger agreed to end agency operations in Iran.

The legacy of the coup and the Nixon-Kissinger deal also meant there were no covert contacts with key players in the revolution to warn the C.I.A. months later of an impending seizure of hostages at the U.S. embassy in Tehran, or through whom to work for their release. Which helped open the continuing fissure between elements of Islam and the West.

Another example: Under Ronald Reagan in 1988, C.I.A. Director William Webster, a strait-laced former F.B.I. chief (the only man to hold both posts), threw a champagne party when Muslim rebel fighters in Afghanistan, the mujahideen, forced the withdrawal of Soviet forces with C.I.A.-organized support. But many of the mujahideen subsequently morphed into Al Qaeda, which turned U.S. airliners into missiles on Sept. 11, 2001.

By 1997, warnings about Al Qaeda were coming thick and fast. But failure to nip 9/11 in the bud, we learn, began then with President Bill Clinton's reluctance to consider a paramilitary invasion of its headquarters in the Afghan tribal regions as proposed by his C.I.A. chief, George Tenet, gregarious son of a Greek diner owner in Queens, previously Senate Intelligence Committee staff director, presidential assistant on the National Security Council, and C.I.A. deputy director.

The next year, Al Qaeda was behind the bombings of U.S. embassies in Tanzania and Kenya, killing more than 200. But Mr. Clinton — apparently fearing that overreaction might seem a "Wag the Dog" distraction from his Monica Lewinsky scandal — ordered only two ineffective cruise missile strikes.

A month before the 2000 presidential election, a skiff loaded with TNT blew a hole in the U.S.S. Cole, a guided-missile destroyer in Yemen's port of Aden, killing or wounding nearly 60 sailors. But somehow neither the C.I.A. nor the F.B.I. would formally find Al Qaeda responsible, and one senior intelligence officer alleges that word came down not to assign blame that would have forced Mr. Clinton to order a counterstrike — or not — either of which might impact the vote.

Come summer of 2001, Mr. Tenet's experts were desperately warning the George W. Bush White House of signs that something massive was coming, and soon, but not exactly where or when or what do about it. "The word back," says Mr. Tenet: "We don't want the clock to start ticking," which to Mr. Whipple meant that "in the event of a major Al Qaeda attack, the Bush Administration did not want anyone to know that they'd been warned."

And the White House was already focusing on a different target, the Whipple book confirms. "The Bush inner circle had come into office with the intention of going to war with Iraq," according to Richard Clarke, antiterror adviser to both Mr. Clinton and Mr. Bush. Mr. Tenet "knew what they wanted from day one. We all did."

All of which gave him confidence, with far from conclusive evidence, to help plan, push for, and manage the covert copter mission that killed Al Qaeda leader Osama bin Laden in Abbottabad, Pakistan. V.P. Joe Biden was against it. Mr. Obama was "livid" on learning Mr. Panetta had briefed congressional leaders in advance, but subsequently raised him to secretary of defense.

The signal achievement of Donald Trump's initial C.I.A. director — Michael Pompeo, a conservative G.O.P. congressman from Kansas who graduated from West Point and Harvard Law and is now our controversial secretary of state — may have been to propose that his own deputy, the veteran covert operative Gina Haspel, be named the C.I.A.'s first female boss.

What the C.I.A.'s latest director can do against the far larger challenges of Iran's nuclear program, North Korea's, and the multifront aggressiveness of China will be interesting to see, if not cut short by the results of next month's election.

David M. Alpern interviewed several former C.I.A. directors (and played tennis with one) as host of the "Newsweek On Air" and "For Your Ears Only" radio broadcasts for more than 30 years (archive.org/details/foryourearsonly). Now he moderates Zoom sessions on foreign and domestic affairs for the libraries in Southampton and in Sag Harbor, where he lives.