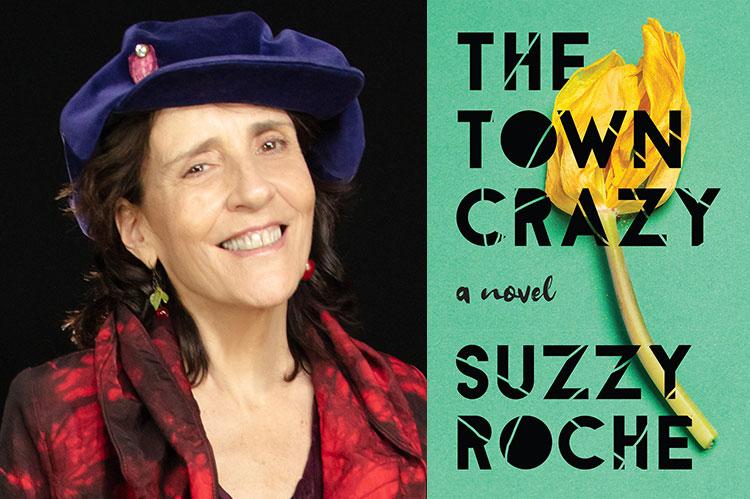 The time is 1961. The place is the suburban Catholic enclave of Hanzloo, Pa. All is the nuclear family and standards of normalcy, pecking order, and church on Sunday.

From her lookout on the cul-de-sac of Mundy Lane, Clarisse McCarthy, in her shirtwaists and pencil skirts, delicate cross pendant at her throat, holds court, holds sway, and wraps the subjects of her fiefdom, including her pretty but not so nice 6-year-old twins and her paint company executive husband, around her finger.

"She ran every bake sale, clothes drive, and potluck dinner. Still no amount of good works could keep people from staring at the slow sway of her behind when she walked. It was the only thing in all of Hanzloo that Clarisse McCarthy could not keep an eye on."

Prominent in Clarisse's sights is Lil O'Brien, the beautiful, ethereal, green-eyed flower of a woman who stands, somehow, outside Clarisse's sphere of influence. Perhaps this otherness has to do with the scraps of paper about Lil's house, the scribbling: poems. This is a woman with the very soul of a poet. Lil longs for something else — escape to New York City, self-expression.

At the dawn of the action of the book, Lil has "been acting strange lately, like nervous breakdown strange," or as Lil's husband terms it to Alice, their scabby-kneed, prone-to-tears, neglected, and poorly adjusting 7-year-old, Lil has "a disease of the soul." Incontrovertible evidence: the "pill bottles and poetry books" littering the coffee table beside the nest on the living room couch to which Lil has retreated, growing thin and unreliable.

Luke Spoon is the father of 7-year-old Felix, a wise child figure, unaffected and uninhibited, abandoned by an absent mother. He is forthright, honest, and strange; he is rejected by the other children at Immaculate Conception, the Catholic school in Hanzloo. Marginalized by prejudice against his otherness, Felix falls prey to adults' assumption of nefarious intentions at every turn, witness a playground accident involving Dawn and Fawn, Clarisse McCarthy's twins, for which he is not forgiven. His father stands by him. And so, with a special affinity, does Sister Annunciata, the eyepatch-wearing, grouchy and commanding, yet strangely warm and mysteriously secular-seeming older nun who acts as principal of Immaculate Conception.

Felix is drawn to the likewise friendless Alice, daughter of the spiraling Lil, thus linking outsider Luke Spoon and outlier Lil O'Brien in a fragile, provisional relation. When they first meet, Luke encounters Lil in the wreck of her domestic life, on the unkempt living room couch: "The curve of her hip, the pale skin on her legs and feet, helpless and exposed, stirred a kind of desire in him that he couldn't pinpoint, as if he envied her proximity to complete despair; as if he'd only been dancing around its periphery, and, until this moment, he hadn't even realized it."

Meanwhile, a heady swirl of attraction for Luke Spoon and antipathy for his son begins to fairly intoxicate Clarisse McCarthy, who is simultaneously beset by a brew of jealousy, pity, and aggressive savior behavior toward Lil O'Brien. On both fronts, the pot-stirrer takes action, inserting herself to form a triangle with Luke Spoon and Lil O'Brien that has exactly zero equilibrium.

Thus, the character-driven second book of the singer-songwriter turned novelist Suzzy Roche is set to unfold. (Those who are familiar with Ms. Roche from her tenure with the musical group the Roches, a trio with her sisters, Maggie Roche and Terre Roche, may recall their song "The Married Men," an ode to infidelity of a certain rueful playfulness that is not to be found amid the Catholic guilt of Hanzloo.)

While social satire lingers about the character of Clarisse McCarthy and her rule over Hanzloo, cast as something of a Peyton Place, Ms. Roche's writing as a whole lacks the crisp professionalism and detachment to handily sacrifice her characters on the altar of social commentary. Clarisse McCarthy herself is humanized by a dash of self-loathing. She struggles with a sense of a split self, warring motivations and intentions. The triumph of her ego over her compassion is recognizable — Hanzloo is not the only place where the motives of alpha do-gooders wobble between asserting self and evidencing altruism.

In Sister Annunciata, Ms. Roche keeps it real with the nun's compassion for human frailty and her gruff faith in humanity, starting with her own. Luke Spoon, too, has a true-to-life flavor in the uniqueness of his self-deprecating sexual dynamism. And in Lil, Ms. Roche captures a strand of authenticity around her struggle for self-expression through writing poetry: "Inevitably, she'd scoff at what she wrote, close up her pad, and hide it under the cloth napkins and the coupons that she carefully cut out but could not remember to bring to the store."

Though even as Ms. Roche invests her characters with dimension, she falls short of hard-bitten realism. Between a dash of satire and a splash of reality, a gentle sense of sympathy for human frailty flutters in the writing of the novel, softening up the edges.

When things go eventually terribly wrong in Hanzloo, there's a sense of sorrow in store for the reader that only the character-driven novel can bring. Yet resilience comes with time to the people of Hanzloo, some moving on, some staying put, and Clarisse McCarthy even acknowledging the mystery of life and finding value in ambiguity — finding herself drawn, of all things, to a poem.

Suzzy Roche has spent summers in Sag Harbor for many years. Her previous novel was "Wayward Saints."