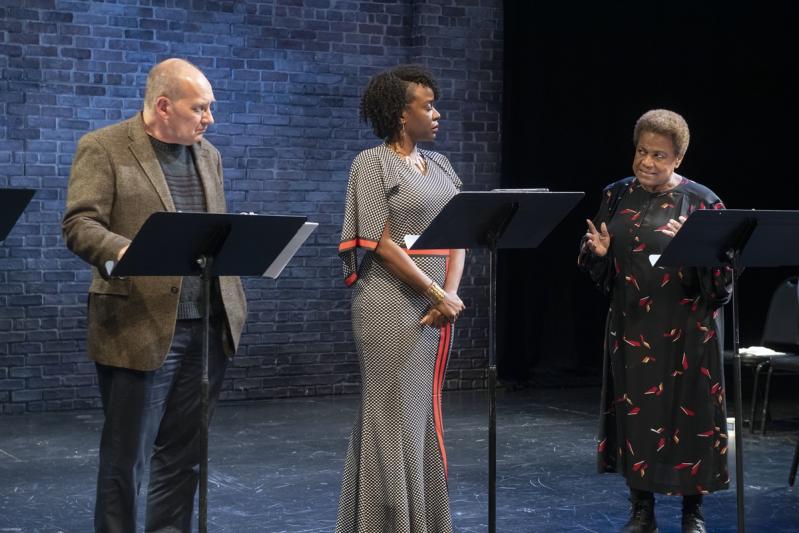 Deborah Brevoort's "My Lord, What a Night" was performed at Bay Street's 2019 New Works Festival.
Michael Heller
By Mark Segal

"Title Wave: 2022 New Works Festival," set to open Friday evening at Bay Street Theater in Sag Harbor, is not only the festival's first fully live showcase of cutting-edge theater since before the pandemic. It is also the first to introduce two new musicals, along with two plays, and the first with a completely open selection process.

"We wanted to make this festival accessible to all," said Scott Schwartz, the theater's artistic director. Considering that more than 600 submissions were narrowed down to four, it is no surprise that Mr. Schwartz deems the selections "different, exciting, and representative of where theater is at this moment."

The four plays, each to be presented as a staged reading, include "Double Helix," "One Man Titanic," "Atacama," and "Zero State."

With book, music, and lyrics by Madeline Myers, "Double Helix" is the story of Rosalind Franklin, an English chemist known as the "forgotten heroine," whose contributions to the discovery of the structure of DNA were mostly unrecognized during her lifetime.

Franklin's photograph using X-ray crystallography was instrumental in the discovery of the double-helix structure that earned Nobel Prizes for Francis Crick, James Watson, and Maurice Wilkins in 1962, four years after her death.

"The show is sweeping and epic and beautiful and really interesting," said Mr. Schwartz, who is directing the production. It is not only a scientific story, "it's also about her life, a romance she was involved in, and the challenges she faced as a woman trying to balance her work and her life. It has an amazing score and great characters."

While "Double Helix" has 10 actors, the other musical in the festival has only one. "One Man Titanic" is about the five members of the band, as well as all the passengers and crew of the doomed ship, all played by Joe Kinosian, who also composed the play's music.

Mr. Kinosian, Scott Rothman, who wrote the book, and Kellen Blair, the lyricist, said during a Zoom session that they brainstormed over a series of phone calls before deciding, Mr. Blair said, on "the biggest musical of all time . . . gigantic orchestra, gigantic cast, huge set, and, for whatever reason, the whole thing would have to be done by one person."

"It was very much written in the shadow of the 2016 election," added Mr. Kinosian. Even though the pandemic had not yet hit when they started developing the play, "a lot of us felt like we were on a sinking ship of sorts, which made that theme very relevant at the time."

Stage directions are read at the beginning of the play, and for the first two pages Mr. Kinosian, who also plays the piano and sings, identifies each character using such props as a scarf, a pair of glasses, a handkerchief, and a cigarette.

"At its conception, it was an effort to make this as difficult as possible on Joe the performer and Joe the character within the performance," said Mr. Rothman. "In some ways you are watching a high-wire act."

Written by Augusto Federico Amador and directed by Jose Zayas, "Atacama" is set in the landscape of Chile's Atacama desert, where two strangers meet while searching for the remains of their children, disappeared years earlier by the Pinochet regime.

"It's full of magic realism, it has this amazing view of the culture of Chile, and two really great characters," said Mr. Schwartz. "Even though it's about something very serious, there's also a lot of humor."

A review in the Twin Cities Arts Reader of a recent performance of the play said, "The mission of the Full Circle Theater . . . [is] 'to produce heartfelt, groundbreaking theater that artfully addresses issues of diversity and social justice for 21st century audiences. . . This mission is well met in FCT’s current production of 'Atacama.' "

"Zero State," written by Allison Moon, a playwright and sex therapist, and directed by Jen Wineman, is the story of a neuroscientist who uses her innovative consciousness-transferal technology to inhabit the dead body of her husband.

"A bit science fiction and futuristic, it's really about a marriage and all the things she learns about their relationship and his life that she didn't know," said Mr. Schwartz. Because of its exploration of the characters' intimate lives and some adult language and content, the theater is recommending it for those 18 and older.

A Conference for Young People to Create Solutions
Get Outside, Get Moving
Two Traditions, One Fair in Springs
END_OF_DOCUMENT_TOKEN_TO_BE_REPLACED