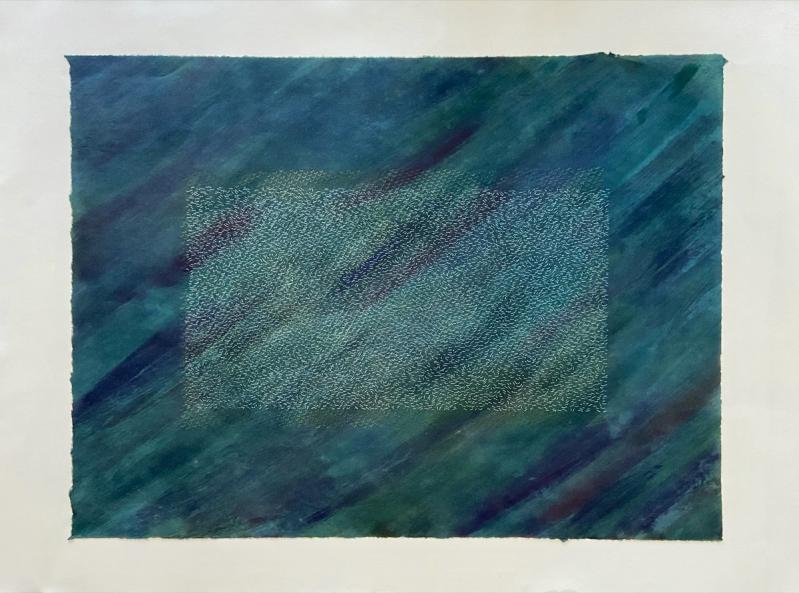 Two New at Duck Creek
Exhibitions of work by Drew Shiflett and Frank Wimberley will open at the Arts Center at Duck Creek in Springs on Saturday.

Ms. Shiflett's show is titled "Patches, Strands, Collage -- Drawing." According to the center, "Ms. Shiflett's drawings are built from a range of materials, including handmade paper, fabric, glue, and canvas, often tinted with watercolor or marked in conte crayon. The closer you get to each work, the more your preconceived ideas of these materials start to unravel." A reception will be held on Saturday from 3 to 5 p.m.

"Stratum," the title of Mr. Wimberley's show, refers to his "richly textured, multilayered compositions." His "resulting topography in each work reads like an archaeological dig through his processes." The show also recognizes the six decades this artist -- in his 90s -- has been working in art. A reception will be held on Saturday from 5 to 7 p.m.

Both exhibitions will remain on view through June 5.

30 Years of Prints
"A Movement in Print," an exhibition spanning 30 years of printmaking by Michi Itami, will open tomorrow at Mark Borghi Gallery in Sag Harbor and remain on view through May 19.

Her prints, while abstract, range from almost minimal geometric patterns to looser, more gestural compositions that echo landscape elements. The exhibition includes prints utilizing authentic Japanese stencil, intaglio, woodblock, computer generated imagery, and monoprinting, made on surfaces such as tissue, rice paper, and rag paper. Ms. Itami, who lives in Sag Harbor, earned an M.F.A. in ceramic design at the University of California, Berkeley, before embarking on a teaching career, which included 20 years at CUNY, where she received a Lifetime Achievement Award from the Women's Caucus for Art.

A reception will be held Saturday from 5 to 8 p.m.

Talking Tech
A series of lectures will be presented on Zoom in conjunction with the "Techspressionism: Digital and Beyond" exhibition at the Southampton Arts Center in partnership with Stony Brook Southampton Library and the Pollock-Krasner House and Study Center.

On Tuesday, Anne Spalter will discuss "Digital/Analog Hybrids" and how she used artificial intelligence to make a new genre of composition embellished with painting and drawing. Ms. Spalter offered the first digital fine arts courses at Brown University and the Rhode Island School of Design in the 1990s. She is the author of the textbook "The Computer in the Visual Arts." The lectures will begin at 6 p.m. with registration available on the Pollock-Krasner House website.

Other talks in the series will follow on May 17 with Colin Goldberg and May 31 with Shimon Attie.

Hamptons Iconic
Karyn Mannix is taking over East Hampton's Herrick Park for a weekend this summer with "Hamptons Iconic," an artist marketplace that will be held in August. She is taking applications now for artists to show and sell their work in the park on Aug. 6 and Aug. 7.

There will be room for 48 artists, who will be chosen from a jury composed of Christina Strassfield, the curator and museum director of Guild Hall; Janet Goleas, an independent curator, critic, and artist, and Susannah Perlman, the curator of Arthouse.NYC. There will be a focus on East End artists who are inspired by the area, but the project welcomes applicants from all over and all career levels, 19 years and older.

The online application is here.

AAEH Abstractions
The Artists Alliance of East Hampton's spring show will be "Abstractions," which opens tomorrow at Ashawagh Hall in Springs. It will remain on view through May 4. An artists' reception will be held on Saturday from 4 to 6 p.m. The show is open daily at 10 a.m. and closes at 4 p.m. on weekdays and 6 p.m. on weekends.

Tuten Goes Solo
Harper's Apartment on Manhattan's Upper East Side is showing "In the Fullness of Life," a second showing of new work by Frederic Tuten. The artist will display recent surrealist landscapes on canvas, Masonite, and cardboard.

In July, Mr. Tuten's book "On a Terrace in Tangier -- Works in Cardboard" will present his paintings and writings along with an interview with Hans Ulrich Obrist about the relationship between the two in his work. Some signed advance copies will be available during the exhibition. The show will be on view through June 11 at 51 East 74th Street, apartment 2X, Thursdays through Saturdays from noon to 6 p.m.

Pandemic Reflections
Two years ago, Jill Magid, an Amagansett artist, executed "Tender," a public art project for Creative Time in New York City for which she circulated into the economy 120,000 United States pennies engraved with the phrase "The Body Was Already So Fragile." The pennies were the equivalent of a single $1,200 Covid-19 stimulus check.

Her newest project for Creative Time, "Tender Presence," an installation/performance at the former Dime Savings Bank in Williamsburg, will offer a communal site for reflection on the past two years starting tomorrow and continuing through May 8.

Musicians will be positioned throughout the venue, which will include a sculptural installation and a short film using footage taken at the beginning of the 2020 lockdown.

Drop-in times are Fridays and Saturdays from noon to 5 (except May 7, which is noon to 3) and Sundays from 10 to 2. Most live performances, which will take place during the evenings, have been sold out as of press time; the Creative Time website is the source for the few remaining evening tickets.

Sherman's Early Years
Beginning on Wednesday, Hauser and Wirth's Upper East Side location will show more than 100 examples of Cindy Sherman's early work from 1977 to 1982.

The Springs part-timer has made a career of turning the camera on herself in elaborate settings and guises. As the exhibition reminds us, this strategy was operative from the very beginning.

In 1977, she started her first series, "Untitled Film Stills," when she was 23. The complete set of 70 works, self-portraits in a variety of natural settings with an implied but vague narrative, will be on view in the show, the first time they have been shown together since her Museum of Modern Art retrospective in 2012.

The exhibition also includes her very early color photography, which she shifted to in 1980. Here, she used the highly controlled environment of her studio, but kept the camera focused on her. The new series was eventually deemed the "Rear Screen Projections," for the artificial background scenes she used in this group of works. The final series reflected on in the show is "Centerfolds," images of her fully clothed, but in the suggestive poses of pin-up models.

The show will remain on view through July 29.

Two Brothers (in Law)
An artist and a brain surgeon walk into a gallery . . . appears to be the premise of "2 Brothers-in-Law: An Artist & Brain Surgeon." The exhibition will open at AB NY Gallery in East Hampton on Saturday from 6:30 to 8:30 p.m.

The work on view will be by the gallery's owner William Quigley and Jeffrey Arle, the brain surgeon in the duo. He will offer a series of paintings "exploring the evolution of language and the currency of time." Mr. Quigley will show new work in a similar vein to his portraiture and "wide exploration of abstraction using a variety of materials, subject matter, and text."

Head for "Tails"
The Southampton History Museum will open its 2022 exhibition on Wednesday with "Puppies, Ponies, and Pussycats: Tails of Southampton." The show focuses on the South Fork's furry friends. Selections from the museum's collection that are animal themed will be displayed with historical and current digital photographic prints and artwork by Kimberly McSparran, Rachelle Oatman, and Dinah Maxwell. Caretakers and companions will also be featured in the artwork. Objects on view will include pet-themed "toys, dishes, banks, pillows and doorstops."

Tom Edmonds, the museum's executive director, is the organizer of the show, which will remain on view through December.

Buchter Benefit
Ron Buchter's atmospheric photographs of the South Fork and New York City are on display at the Southampton Cultural Center through May 22. He plans to donate proceeds from the show to the Hamptons Youth Performing Arts Program, the members of which have developed short plays inspired by his images. The center is open Thursday, Friday, and Sunday from 2:30 p.m. to 5 p.m. and Saturdays from  2:30 to 7:30.

At the Gardiner Mill
Five photographers will show their work at the Gardiner Mill Cottage Gallery beginning tomorrow. Linda Alpern, Doug Kuntz, Anthony Lombardo, Jonathan Morse, and Blair Segram's work will be on view through May 15. A reception will be held on Saturday from 5 to 7 p.m.

A Conference for Young People to Create Solutions
Get Outside, Get Moving
Two Traditions, One Fair in Springs
END_OF_DOCUMENT_TOKEN_TO_BE_REPLACED