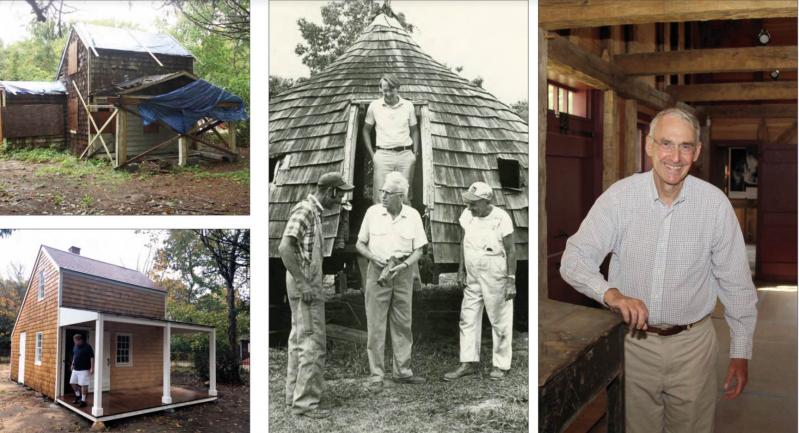 Robert Hefner has spent an entire career devoted to preserving and rehabilitating historic buildings on the South Fork, such as the Dominy family shops on North Main Street, right, more recently the George Fowler House in East Hampton, at left, and the Beebe Windmill, center, farther away in Bridgehampton (with Sherrill Dayton, Frank Dayton, and Paul Cullum in 1981).
Durell Godfrey, Robert Hefner, and Carissa Katz Photos
By Irene Silverman

Not many people have a spacious backyard full of apple and peach trees, much less ones that actually bear edible fruit. "Look at this," Robert Hefner declared happily on a recent Amagansett afternoon, sitting back in his deck chair and waving toward the orchard. "This is the life for me."

That may be, but it's certainly not the life he's lived during the last 40 or so years. No man of leisure he, Mr. Hefner has probably been one of the busiest people in East Hampton, and one of the luckiest, too, as he'd be the first to acknowledge. All his working life, he's done what he absolutely loves.

Name a centuries-old monument here, or windmill, or house, and the odds are that Mr. Hefner had a hand (often a hands-on hand) in helping to save it from destruction or reincarnating it, sometimes phoenix-like from its very ashes. He can recite the floor plans and architectural attributes, the dimensions and dates, the metes and bounds, of the Montauk Lighthouse, the Amagansett Life-Saving Station, the Thomas Moran House and Studio, the Dominy family woodworking and clock shops, Hook Mill and every other local windmill between Southampton and Gardiner's Island, and dozens, probably hundreds, of less well-known projects.

In 1990, early on in his chosen career as a historical preservationist, Mr. Hefner reported to the East Hampton Town Board that an ancient farmhouse off Squaw Road in Springs, slated for demolition, was an example of "early subsistence farming near Three Mile Harbor, valued primarily for the salt hay that grew there," thus laying the foundation for what is now the Arts Center at Duck Creek. In 1998, he compiled an inventory of the buildings on Plum Island and researched its history going back three centuries; that work surely figured in the federal government's recent decision to preserve the island. In 2011, on the basis of his 50-page report, the Montauk Lighthouse was named a National Historic Landmark -- not, as you'd think, because George Washington authorized it, but, argued the man who'd majored in American studies at Hampshire College, because it was a vital cog in the trade between New York and England.

In 1976, the budding historian was hired by the Society for the Preservation of Long Island Antiquities to make the rounds of local libraries, researching silversmiths and woodworkers. The year after, now working for the National Park Service, he was back in East Hampton, "knowing not a lot," to help rehabilitate the Pantigo windmill. Restoring the old mill, with Sherill Dayton and Paul Cullum as his mentors, "I learned from them about carpentry and the way carpenters work." The experience, he said, "played a large part in what enabled me to do all this. And that's what I love to do, working with carpenters and solving mysteries -- that's the most fun."

Among his most mysterious challenges was the Montauk Association Clubhouse, which burned down in 1933 and for decades thereafter was given up as lost. Engaged by the owner of the vacant land, who dreamed of rebuilding the clubhouse, to unearth any remnants, Mr. Hefner found clues to its foundation beneath the soil in the form of porch posts. He measured them so many times, he said, that "I used to dream about it."

After several trips to Newport, R.I., to photograph "all the McKim Mead White buildings there," he was eventually able to draw up plans for the structure's duplication. The land is now for sale, he noted -- and if anyone wants to reconstruct the Clubhouse, "they could have Stanford White as their architect."

Another solved mystery, which proceeded in fits and starts over many years but was "great fun" throughout, was the Thomas Moran House and Studio opposite Town Pond in East Hampton. In 2008, Mr. Hefner told the East Hampton Village Board that the house was "locally and nationally as important as East Hampton's windmills and the Montauk Lighthouse," but predicted that resurrecting it would be extremely difficult.

In the end, the project proved to be as much a revelation of Moran's psyche as an architectural challenge. The artist, who was a legendary penny-pincher and who built most of the house himself, had a penchant for using found materials wherever possible -- a door here, a display window from a Manhattan storefront there. "The personality of that place was unbelievable," said Mr. Hefner. "So haphazard. The turret was just toenailed on. His frugality shone right through."

On Springs-Fireplace Road in East Hampton stands another house, this one tiny, that tested the preservationist's ingenuity. The George Fowler project, which was completed a few years ago with the reconstruction of what was likely the last remaining Montaukett dwelling on the peninsula, has been a museum-in-waiting ever since, the exterior complete but empty within. Mr. Hefner shrugged when asked about its future. "I loved that project, too, " he said. "The second floor was one open room where the children slept. You could see through the cracks to the shingles. Eventually they put wallpaper over wallboard to cover the space."

There was just one tiny photograph of the original house -- "one by one and a half inches" -- to go on, but "using that, I could rebuild the porch." The framing, surprisingly, proved to be identical to the kitchen porch on the Moran house, and the inexpensive paneling was the same also -- though maybe not so surprising if you knew that the house's owner was the artist's gardener. "Maybe Moran had some left over," Mr. Hefner suggested with a grin.

He paused. "There's always something when you do these projects," he said, still smiling. "It's the serendipity of things. The porch columns on the Moran house, for example, were known to have been on pedestals, but there was no record of their appearance. Someone must have kept one of the pedestals, because it eventually turned up at a yard sale." The seller told Richard Barons, chief curator of the East Hampton Historical Society, that "this is the base of a column on the Moran house," Mr. Hefner recalled.

"And it matched!" he exclaimed. "When you need something, it turns up. At least, there's just enough to figure things out."

"I've been very lucky," he continued. "It's just incredible to do all these projects. The concentration here is incredible."

He stopped again, staring across at the orchard. "My most fulfilling job has been the Dominy houses."

For Mr. Hefner, the reconstruction of the centuries-old Dominy workshops, now ensconced at their original North Main Street location and awaiting only interior appointments before opening as a public testament to the genius of East Hampton's celebrated family of craftsmen, is as much a personal triumph as a major link in the village's string of historic treasures. Dominy documents in the East Hampton Library's Long Island Collection consumed much of his early time here, and the Dominys have figured in his career ever since, though never with such consequence as these buildings. Recreating them "took a lot of figuring out" over a period of years, with starts and stops along the way as North Main Street itself underwent reconfiguration.

Like the Fowler House, Mr. Hefner said, "the outside is done, but the inside needs doing. Everything is paused right now."

The buildings are owned by East Hampton Village, for which Mr. Hefner long served as director of historic services. He resigned from that post earlier this summer, but will continue to work on some projects as a consultant.

Notwithstanding, Mr. Hefner declared, "I will finish the Dominy project, and make it into a museum." To date, he said, the project has cost about $1.5 million, $250,000 of which was contributed by Ronald Lauder. Furnishing and finishing it will cost another half-million, Mr. Hefner estimated. "The Dominy shops have obvious national significance. We need to raise the money to finish it."

One last question. If he could have been anything other than a conservator of American history, what might it have been?

He answered without hesitation. "I'd be a boat-builder."