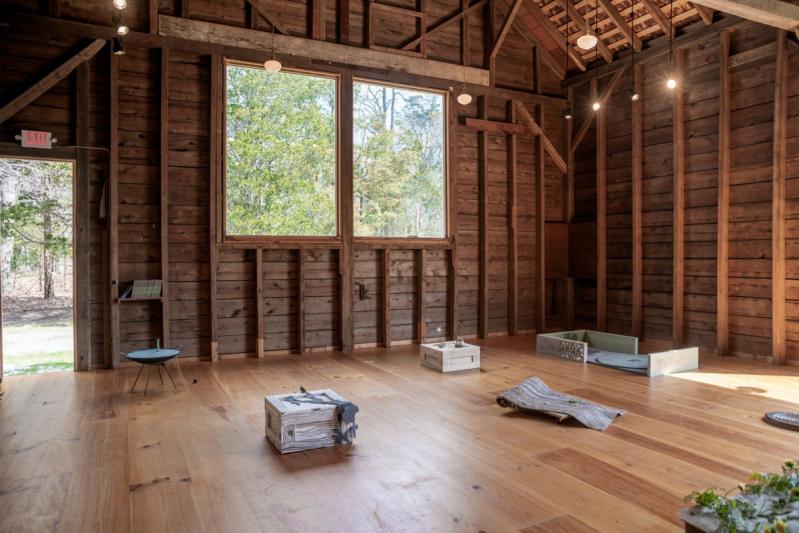 The Arts Center at Duck Creek barn is a perfect setting for the predominantly floor sculptures of Bonnie Rychlak and Jeanne Silverthorne.
Gary Mamay
By Jennifer Landes

The raw space of the Arts Center at Duck Creek is transformative to the artwork that is displayed there. The old Springs barn and now a storage garage that's been outfitted for exhibitions feature open walls and visible beams and other rough remnants of their former uses, but are still clean spaces perfect for hanging and displaying art.

"Down and Dirty" is a two-artist show of sculptures made for the floor. The two artists, Bonnie Rychlak and Jeanne Silverthorne, were not brought together randomly, but rather as a direct result of their friendship and similar aesthetic and material affinities. The show comes from the Dodd Galleries at the University of Georgia, and was chosen by its director, Katie Geha, but was also conceived with Duck Creek in mind.

The best way to underline and understand the affinities between the artists is to start with "Grate of Unintentional Consequences." It's a 2018 piece they worked on together using elements of both of their practices. Ms. Rychlak, who is known for her "drains" made out of cast and carved wax, provides the base, which is rectangular instead of her more common round forms. Ms. Silverthorne, who uses primarily rubber in her pieces along with phosphorescent pigment, makes a pipe for the drain and little water beads that drip out. It is as if the latter artist is finishing the former artist's thought or just providing her own riposte.

Its placement, near the door closest to the driveway entrance, also makes it one of the first pieces visitors encounter upon entry, confirming its primacy in this context.

The rest of the room contains Ms. Silverthorne's rubber pieces and Ms. Rychlak's primarily wax pieces. If the serial use of materials sounds reductive, it's not. The artists are exceedingly inventive, even in their reuse of forms like Wile E. Coyote for Ms. Silverthorne and the drains for Ms. Rychlak.

If it wasn't obvious from the cartoon reference, Ms. Silverthorne's work carries some irreverence. The indefatigable yet unsuccessful coyote chases the roadrunner throughout the desert, devising elaborate traps that only seem to backfire. Ms. Silverthorne, who makes her coyote figures pre-flattened in dark rubber, implies the failure and defeat in artistic practice as well as the need to rise up and give it another try.

The figure in "Wile E. Coyote (With Breasts) Studio Floor, Overgrowth" exists in negative space having already hit the ground (or the studio floor). The form leaves a deep impression in the "floor," which is significantly overgrown with rubber dandelions. It seems as much an elegy as a riff.

"Long Fuse With Short Fuse on Crate" has plain sticks of rubber dynamite tied neatly in a bundle to contrast with a knotted and curvy explosive device on a short fuse. Although the implication is that one is likely to be more successful than the other, it's tempting to imagine an alternative scenario. In both cases, Ms. Silverthorne has used phosphorescent pigment to depict the sparks of the lighted fuses, implying we're about to find out.

Her studio floor sculptures are just that, rubber cast to look like hardwood flooring, which is usually folded over or rolled up in some way to point out its paradoxes. It often has rubber weeds growing through the cracks as well. Her drying poppies are loosely stacked and dense when you pick them up, having a satisfying weight to them.

"I've tried and tried not to use rubber," Ms. Silverthorne admitted in an interview with Ms. Geha. "It's problematic, it's incredibly expensive. But nothing ever worked to my satisfaction. So I'm stuck with it."

Although drains are one of her primary means of expression, Ms. Rychlak presents them in a variety of ways. She offers different shapes, colors, indications of rust, and degrees of melting, in the case of a few drains that were left outside in the sun for an extended installation. She has put mirror pieces on some drain bases, giving the drains a reflecting pool kind of aura. One is meant to be filled with water and often attracts the attention of visiting pets.

Then there are the other forms she creates, such as a basement door cast in wax for "Vault Follie" or the unusual box she made called "C.K.C." that is covered in burlap encased in encaustic. It's set on "feet" covered in a dark floral fabric that resemble Granny's doorstops. That same fabric seems to project out of the box and is visible through the pebbled glass top.

Each artist has said her chosen medium appeals to her because of its suggestions of flesh. Here one can register more cerebral analogies as well. Even Ms. Silverthorne's most playful pieces are thoughtful and resonant. Ms. Rychlak points to what lies beneath and all of the scary associations with it.

This show and the "Elizabeth Hazan: High Noon" paintings exhibition in the Little Gallery will be on view through June 6.