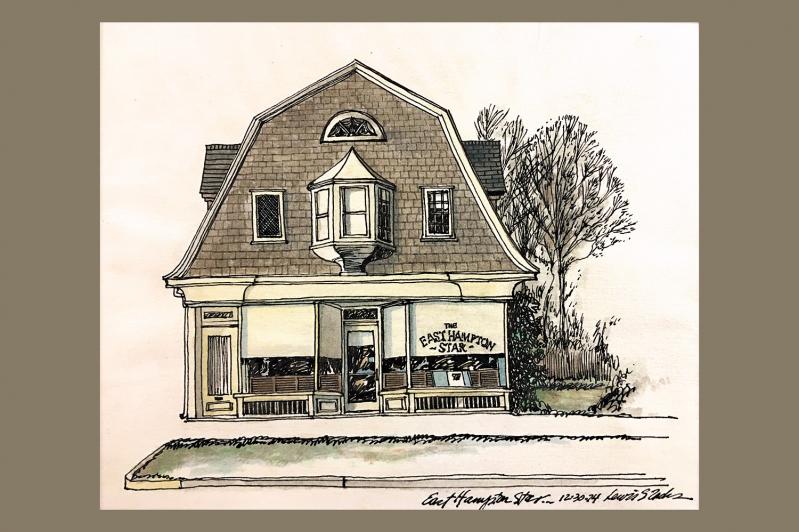 A hand-colored, pen and ink drawing of The East Hampton Star made by Lewis Zacks in 1974.
By Jennifer Landes

Lewis Zacks captured a lot of the South Fork and New York City in his realistic canvases. It turns out he even made a watercolor drawing of The Star's building on Main Street in East Hampton.

Zacks, who died in 2014, would have been 90 this week. He was both a commercial and fine artist with a successful career as a designer and illustrator for ad agencies and book publishers. He then formed his own multimedia company with a partner, where they produced films, videos, stage productions, museum exhibits, and conventions.

In his downtime and retirement, he focused his paintbrushes on "the disappearing landscapes of Eastern Long Island" and the Lower East Side of Manhattan, according to a biography on his website.

Fran Castan, a poet who is Zacks's widow, wanted to commemorate his 90th birthday on Monday by making a gift of his "The East Hampton Star" drawing to the newspaper, which inspired its creation.

She noted that he was known for his multiple renderings of The Sag Harbor Cinema in oils, watercolors, etchings, and solar prints. The LUNCH sign on the roof of the Lobster Roll Restaurant on Napeague was also a frequent source of inspiration. One of his various versions was displayed in the restaurant and was used on a postcard.

Other favorite subjects of the artist were "boats, barns, Canio's bookstore, and the canopy of trees on the road to Asparagus Beach," according to Ms. Castan. "Though Zacks's work is representational, critics have noted its liminal qualities of transcendence and transformation -- a sense of the transitory spirit, or essence, of a place," she said.

The couple lived in Amagansett for 32 years, first as weekenders and summer residents and then as full-timers, becoming part of the community of artists and writers who found their way here. They collaborated on "Venice: The City That Paints Itself," a collection of his artwork and her poems created during two long visits to the Italian city.

Two shows of his works on the South and North Forks will be announced soon, the sales of which will benefit charities that he supported, such as East End Hospice, Meals on Wheels, and the Retreat. Community Action Southold Town or CAST, an organization that supports low-income families from Laurel to Orient Point with nutrition, energy costs, employment, and education on the North Fork, will be an additional beneficiary.