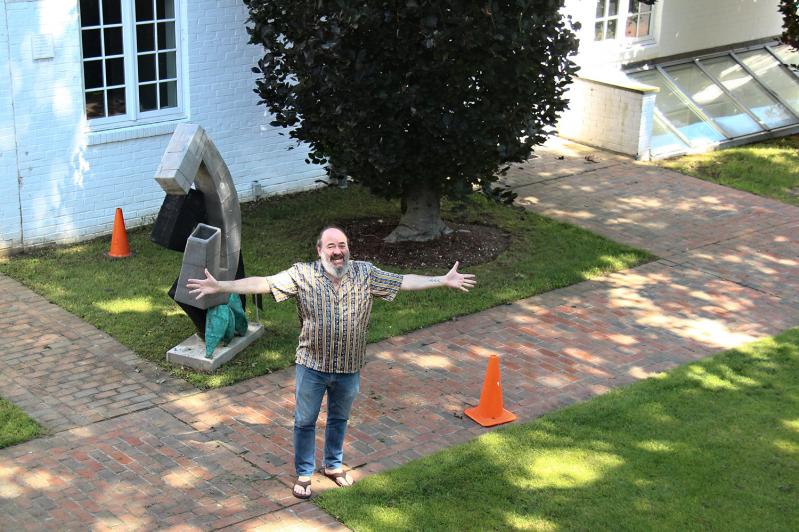 Josh Gladstone has spent a lot of time in Guild Hall's sculpture garden, plotting where to put a stage for intimate performances, six feet apart.
Durell Godfrey
By Jennifer Landes

This year has been tragic, hopeful, and everything in between. The only thing it has not been is predictable, especially in areas hit hard by the coronavirus. That has left arts organizations on the South Fork scrambling to devise programs that they might never be able to mount, given state requirements for reopening and their inclusion in the phase-four scheduling, last on the list of the places that can reopen.

Josh Gladstone, the artistic director of Guild Hall’s theater programs, summed up the paradox: “It’s an exercise in Zen Buddhism. How do you create performing arts programming in a theater that doesn’t exist?”

That hasn’t stopped Guild Hall from planning its summer, relying on virtual platforms for its splashier programs -- such as a play reading by Alec Baldwin and an improvisational approach to the events it might be able to produce on its grounds. At the same time, it’s strategizing how to keep visitors at a safe distance from one another when they are allowed inside to see art exhibitions.

Andrea Grover, Guild Hall’s executive director, said webinars from national and international arts organizations and her European colleagues who have reopened museums in places like Bern, Switzerland, have provided a wealth of information to draw on in putting together plans. Hearing what is working and what is not in their protocols “is like getting a message from the future,” she said. “We don’t have to invent procedures from scratch.”

“A lot of people want to return to physical gatherings and use more senses than they can online,” Ms. Grover said. “They want to be outside to smell the air and feel the heat of sun on their body and the grass under their feet.” The virtual offerings will continue, but the museum expects a good deal of interest in what is planned for its grounds.

Early visitors to the museum are likely to be younger than the typical visitor, an older demographic that is more vulnerable to the coronavirus. Guild Hall’s hours and shows may be adjusted in response. “Younger people make decisions later or last minute,” Ms. Grover noted. “They like the idea of come-and-go participation rather than a more formal performance or lecture.” This could mean activating spaces inside and outside with visual and audio installations and spontaneous performances, “things you can do at your own pace.”

Normally at this time of year, Guild Hall’s annual summer guide would have been out for a few weeks and its programs planned months ago. Many programs and exhibitions were set, but they have been moved out to 2021 and even 2022.

What Ms. Grover and Guild Hall’s team of visual and performing arts programmers do know: There is a wealth of artistic talent to be mined here. She said they were calling this season a “restart” to highlight the use of program budget money raised for events that invest in the local creative and business communities.

Earlier this spring, Mercedes Ruehl, Harris Yulin, Ebon Moss-Bachrach, and Tedra Millan took part in an online reading of "Portrait of Tennessee: The Words of Tennessee Williams." It had the feeling of an old radio show, Mr. Gladstone said. The intimacy appealed to Mr. Baldwin, who proposed an online benefit reading of “Same Time, Next Year,” directed by Bob Balaban. Mr. Gladstone said the female lead opposite Mr. Baldwin has not been cast yet, but there are rumors that Tina Fey has been approached. More information will be announced once the details are set.

Other online offerings could include a comedy written by Joy Behar and some short pieces by Eugene Pack, who has had a long association with the theater, with Blair Underwood participating. On Tuesday, Austin Pendleton will give an online benefit staged reading of Joe Beck’s play “James Joyce: A Short Night’s Odyssey From No to Yes” to mark June 16, or Bloomsday, the date on which Joyce’s epic “Ulysses” is set. Details and tickets are available on the Guild Hall website.

On the exhibition side, shows of work by Enoc Perez and Karin Waisman, the Flag Art Foundation, and Robert Longo originally planned for spring and summer have been postponed. Instead, the members show, which was open for a week before the museum closed in March, will stay on view if the museum is able to open again in July.

Christina Strassfield, the museum’s director and chief curator, said the new summer show would be a benefit sale of art called “All for the Hall.” It was suggested and organized by Mr. Longo, and will include his donated work and work by artists such as Ross Bleckner, Eric Fischl, April Gornik, Bryan Hunt, Rashid Johnson, and Kiki Smith. It’s expected to open sometime in August, with an online component coming in mid-July.

Ms. Grover said this year offered a chance to “re-evaluate everything in how we approach seasonality.” In the summer, “we always bring in big glittery names from the outside, but we realize we have glittery names right here.”

Mr. Gladstone has compiled a list of musicians willing to come in on short notice and interested in playing small sets for intimate audiences. Ms. Strassfield has been tasked with incorporating performance art into the mix. Anthony Madonna, the fellow in arts education, has been planning activities for families, art instruction, and more, virtually and in settings that make sense at this time. Staff members from other departments have also proposed programs this year.

Mr. Gladstone said he and the theater’s technical director, Sebastian Paczynski, paced the grounds and found the ideal spot for a stage in the sculpture garden, at a corner of the building with interesting architectural details and an expanse of brick wall, which can be used for projections. It’s far enough away from the road to hear and the space forms a natural amphitheater. The lawn, when marked with circles set six feet apart, can accommodate 50 to 70 people.

“It could be a cool little space for local musicians, modest performances, maybe some theatrical or dance things
. . . fun stuff,” he mused.

Even outside, Mr. Gladstone said, the earliest it could start would likely be the end of the summer. “The year is spent, we might as well experiment a bit,” he said. “We can throw it open to the artists in the community. ‘Guerrilla’ and ‘pop-up’ are the words we’re using a lot.”