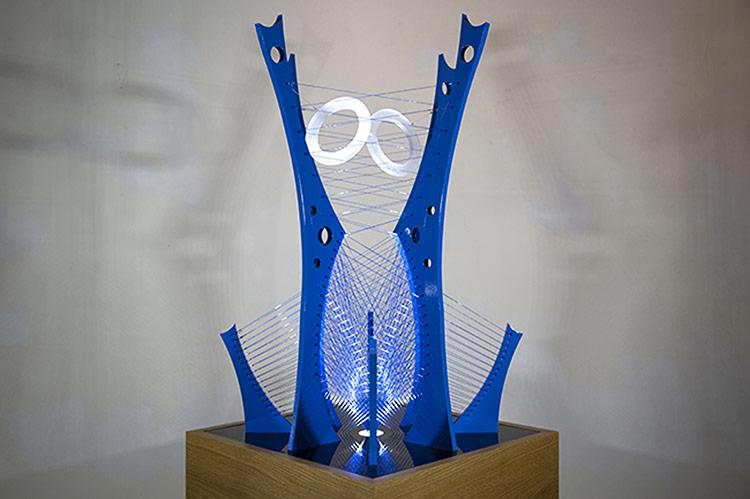 Bob Schwarz’s sculpture “Caroline Herschel” will be on view at the Art Now Fair in Miami.
By Mark Segal

Now that the East End is no longer a magnet for art fairs, with only a couple still in play here during the summer, local galleries have to look elsewhere, and where better than Miami, which is the site of no fewer than 18 art and/or design fairs through Sunday. Seven local galleries have made the trek south, and several others are featuring work by East End artists.

Eric Firestone Gallery of East Hampton is presenting a solo exhibition of work by Miriam Schapiro in the survey section of Art Basel Miami Beach. Schapiro, who lived in East Hampton, will be represented by hard-edged geometric work made in Southern California from 1967 to 1971.

While the Cristina Grajales Gallery is located in Manhattan, it will participate in Design Miami with “A Boy From Texas,” a solo show of recent sculpture and design by Robert Wilson, the founder and artistic director of the Watermill Center. Mr. Wilson’s installation of blown and cast glass reflects on nature, fragility, and his childhood in Texas, where his early theater works were developed.

Mark Borghi Fine Art of Bridgehampton and New York City will take part in Art Miami 2019 with a one-artist show of work by Chakaia Booker, whose abstract sculptures use found objects and industrially fabricated materials. Todd Merrill Studio of Southampton and New York will be at Design Miami with work by nine artists whose work spans contemporary design, fine art, and traditional craft. The White Room Gallery in Bridgehampton has brought work by seven of its artists to Scope Miami Beach.

Other East End artists whose work is on view this week include the sculptor Bob Schwarz at Arte Collective’s booth at the Art Now Fair, and, at Art Basel, Valerie Jaudon with DC Moore Gallery and Lynda Benglis, Joan Mitchell, and Donald Baechler with Cheim and Read.