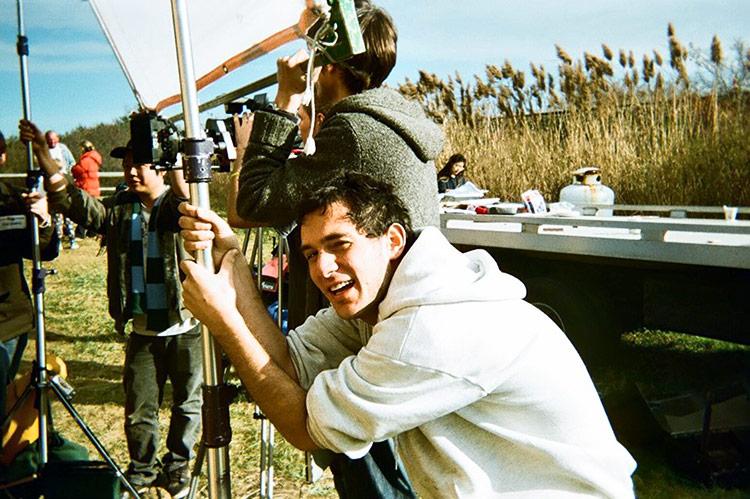 Ari Selinger on the set of his film "Deuce and a Quarter," shot on Fort Pond Bay in Montauk in 2011.
Sofia Rosenzweig
By Christopher Walsh

Move over, “The Affair.” In the stranger than fiction department, a Sag Harbor filmmaker is shopping a screenplay about a Montauk mechanic, his years-long dispute with the town, and the romance he shared with his late partner.

Art is imitating life in the hands of Ari Selinger, who has written a screenplay, “The End,” based at the Navy Road, Montauk, property of Thomas Ferreira. As covered extensively in The Star by the late Russell Drumm, who is depicted in the screenplay, vehicles and equipment were seized from Mr. Ferreira’s property on two occasions in 2009 in what his attorneys said was an effort to force his auto repair business from his Fort Pond Bay property.

The property in question is in an area where the zoning was upgraded in 1983 from commercial-industrial to residential. Mr. Ferreira held state and town licenses to operate his business, but neighbors complained that cars and debris were an eyesore and a hazard. The town board settled a civil rights lawsuit Mr. Ferreira brought in 2016.

The screenplay, a reading of which was held via videoconference last week, also features Mr. Ferreira’s companion, Cathy Anne Tobin, whom he called Freckles. She died in 2017.

A draft of “The End” brings to mind the 1998 cult classic “The Big Lebowski,” and Mr. Selinger, who has written and directed films shot at sites including the Clam Bar on Napeague, the American Hotel in Sag Harbor (“The Ghost of Hank Williams,” which was released on Tuesday), and what is now Ed’s Lobster Bar, also in Sag Harbor, agreed with the comparison.

He met Mr. Ferreira in 2011 while scouting locations for his film “Deuce and a Quarter.” When Mr. Ferreira, then embroiled in his dispute with the town, agreed to let Mr. Selinger and his crew film in his backyard, “he talked about it the whole time,” the filmmaker said.

“I was outside working,” Mr. Ferreira remembered earlier this month, “and these two guys drove up in a beat-up old car. I thought they were customers, or looking for directions. ‘Boy, did you fall out of the sky and land on your feet,’ ” he said he told them. “ ‘I’m a patron of the arts!’ We became friends.”

Mr. Drumm wrote about the filming of “Deuce and a Quarter” in 2011. “When Russell wrote about the film, you could tell there was something larger in play, which still didn’t make sense to me,” Mr. Selinger said. “I didn’t think my style, which is usually kind of screwball, would fit this story — class divisions, legal battles. I didn’t think I could handle it. But Tom kept talking about it, for years. In 2017, there was a tragedy in his household, and I felt really bad and started realizing that if I didn’t tell this story, it wasn’t going to be told.”

“I think everybody pinned him as a careless, toothless, greasy mechanic,” Mr. Selinger said. “I get it, but there was really something interesting going on with this guy.”

Mr. Selinger also felt an affinity for Ms. Tobin. They both had attended New York University, and she and Mr. Selinger’s grandmother were from Sheepshead Bay in Brooklyn. “We had a lot in common,” he said. “But you could always tell . . . I don’t think I ever saw her when she was physically in good shape.”

“The End”’s ending is a poignant one. “He wins the case, but loses Freckles,” Mr. Selinger said.

“She lived long enough to go to trial in federal court,” Mr. Ferreira said. “I got my settlement in late May or early June, and I just went to work. In September she went in the hospital, and in February she died. She never got to enjoy the settlement. I wanted to give her a better life because she deserved it, but we were never able to do that. That’s the saddest part.”

Mr. Drumm’s death, early in 2016, was also a blow to Mr. Ferreira, Mr. Selinger said. “The Star was his only support system. When Russell passed away, it was a big loss in the story of what happened. Tom loses the guy that understood not only him but the whole system. It’s almost like Tom unwittingly fell into this fable, and the only person who could really see the plot points of the story was Russell.”

“Having known Russell, I wanted to pay homage to him,” Mr. Selinger said. “He was not only a great writer, I really felt like he represented the soul of what Montauk is.”