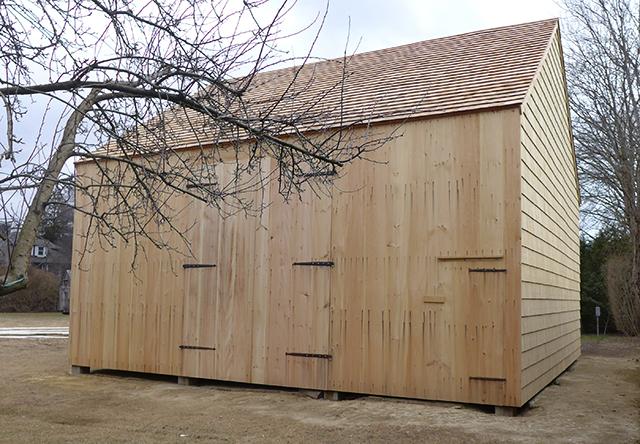 The north side of the finished barn is sheathed with wide vertical planks of white pine.
Mark Segal
By Mark Segal

The Hedges-Edwards Barn has moved, and not for the first time. Dating from around 1770, the barn was originally located on the west side of Main Street in East Hampton, where the library now stands. E.J. Edwards first moved it around 1910 to his nearby property on Edwards Lane. Thanks to the generosity of Helen S. Rattray and her family, the Ralph Lauren Corporation, and Ben Krupinski Builder, the barn has been restored and moved across Main Street to the Mulford Farm on James Lane.

The East Hampton Historical Society will hold a grand opening and dedication on April 27. “It’s going to be a community-wide celebration,” said Maria Vann, the society’s executive director. “Our plan is to utilize the barn as a great education space, to have schoolchildren and other educational groups in there for all sorts of different programs that Stacy Myers, our director of education, is developing. We might do exhibitions there as well.”

While E.J. Edwards built and owned a drugstore that is now the office of The East Hampton Star, his chief occupation was fishing, and he was one of the last surviving offshore whalers on eastern Long Island. The barn housed his family’s whaling equipment, including harpoons, wagons, and the barrels in which whale oil was transported.

One of Edwards’s two children, Jeannette, married Arnold Rattray in 1925, and 10 years later they bought The Star from Bertha Boughton. In the 1960s, the Rattrays’ son Everett joined Ralph Carpentier, the Town of East Hampton, and the historical society to create the East Hampton Marine Museum, whose focus, when it opened in 1966, was the Edwards family’s whaling treasures.

Fast-forward to 2012. Helen Rattray, who succeeded her husband, Everett, as editor of The Star after his death in 1980, was living in the Edwards house. “The thing about that barn is that most of its time in my life there it was jammed full of stuff,” she said. “Absolutely jammed. You’d walk in and it was a mess. But when it got emptied, I was floored by how beautiful it was. I think it was the last surviving unspoiled barn of that type in East Hampton.”

She and her children, Bess, David, and Dan Rattray, deliberated about what to do with the structure. “We thought hard about the building and decided it really was worth saving. Somebody else might have made a house out of it, and we didn’t like that idea too much.”

In December 2012, Ms. Rattray agreed to donate the barn to the historical society, which in turn committed to its restoration and relocation to the Mulford Farm. “We knew from photographs that there had been several farms on Main Street with large barns,” said Richard Barons, chief curator of the historical society, “so we knew we weren’t inventing anything by moving it there.”

The New Jersey Barn Company was brought in to determine the feasibility of dismantling, removing, and reconstructing it. “The building was pretty tired,” said Alex Greenwood, the barn company’s co-owner, adding that some pieces were beyond fixing and would have to be replaced, while others would need to be repaired. Nonetheless, he was optimistic it could be saved.

Funding from the Ralph Lauren Corporation enabled the work to be undertaken in 2016. More recently, just three days before he was killed in a plane crash last June, the builder Ben Krupinski and his associate, Ray Harden, met with Ms. Vann. At that meeting, Mr. Krupinski volunteered to take on certain aspects of the reconstruction as a donation. After his death, Mr. Harden and Stratton Schellinger, now co-owners of the construction company, agreed to honor Mr. Krupinski’s intention.

After discussing the restoration with Robert Hefner, the historical services director for East Hampton Village, “We decided our approach would be not to try to pretend any of the new pieces were original,” said Mr. Greenwood. “The approach was an honest replacement with the same species and the same dimension timber. A number of original pieces that were retained had to be patched.”

Mr. Barons noted that because some of the original sheathing had been preserved, it was determined that the front of the barn had been faced with vertical white pine boards. Vertical siding on barns from that period was unusual, according to Mr. Hefner, who noted that shingles were more common. Three of the exterior walls of the restored barn are shingled, but the front is faced vertically with wide white pine boards sourced by Dan Voorhees, an East Hampton attorney, from lumberyards in Vermont, where he has a house.

Mr. Greenwood explained that the Hedges-Edwards barn, like most from the 18th century, was built with scribe rule framing, which means that structural pieces are not interchangeable. As the barn was dismantled, drawings were made to document the dimensions of each piece and keep track of what needed repair and what needed replacement. Each component was labeled, and all were shipped to the barn company’s facility in Ringoes, N.J.

Once there, each unit was assembled on the ground and squared up to ensure everything fit properly before being shipped back to East Hampton last November. Meanwhile, the Krupinski company had installed concrete piers on the Mulford Farm property.

The barn company attached the sills to the piers and erected the framing during November and December, and the Krupinski team completed the building with roofing, siding, flooring, and massive double doors on the north and south walls. The original purpose of the doors was to allow wind to blow through the barn for winnowing and to give wagons access to the interior for offloading.

“It’s just a naked structure,” said Mr. Barons. “It will be an open space so when we have groups and it’s a rainy day it will be the perfect place to give them an introduction before they go into the farm house or examine the property. It’s so structurally sound that you can have barn dances, kids can work in it, and nobody will care if paint gets spilled on the new floor.”

The Hedges-Edwards barn originally shared the Main Street property with the Purple House, which dates from 1773 and was itself moved, in the early 1970s, to Adelaide de Menil and Edmund Carpenter’s property on Further Lane before ultimately becoming part of East Hampton’s Town Hall campus on Pantigo Road.

“Houses got moved because there was no building lumber on the East End of Long Island,” said Mr. Barons. “The only big lumber was on Gardiner’s Island, which tended to be used by the Dominys for building some of the windmills. It was so easy to move buildings. There were all pinned together with wooden pegs and there was no plumbing or electrical wiring, so you could pull them. Sometimes in the winter, when there was ice, they moved them on sleds.”

All of which sounds a lot easier than two years and a round trip to central New Jersey, but one look at the restored barn, inside and out, makes it clear that it was worth the time and effort.