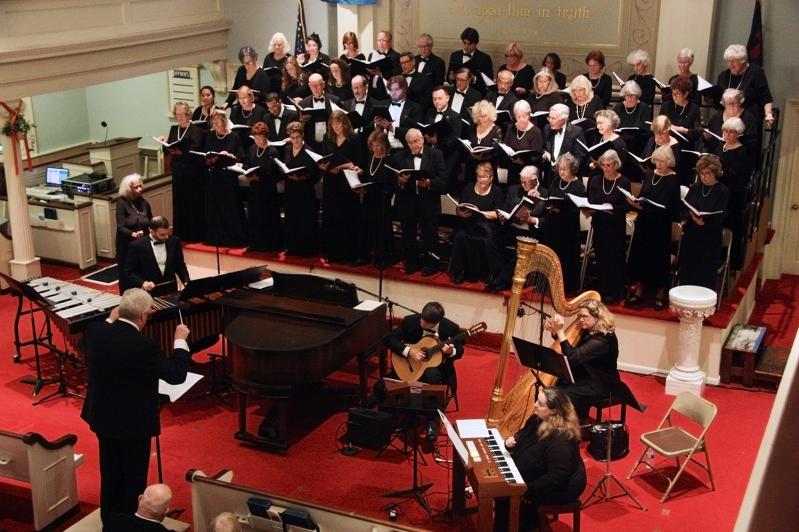 The Choral Society of the Hamptons will celebrate the holiday season with two concerts at the Bridgehampton Presbyterian Church.
Durell Godfrey
By Mark Segal

The Choral Society of the Hamptons has assembled a variety of joyful music drawn from the 19th century to the present for its holiday concert, “ ’Tis the Season: Offerings of Celebration and Renewal Old and New,” which will have two performances on Sunday at the Bridgehampton Presbyterian Church.

The program will feature the world premiere of “Dancing Variations” by David M. Brandenburg, a composer from Amagansett and former executive director of the choral society and the South Fork Chamber Orchestra. Composed for horn, piano, and chorus, it brings to life the words of Kathryn Levy, a Sag Harbor poet.

The concert will also include Gabriel Faure’s “Cantique de Jean Racine,” written in 1865 when the composer was only 20, which takes as its inspiration a religious text by the French playwright. Other works on the program are Camille Saint-Saens’s “Christmas Oratorio,” Gustav Holst’s “Christmas Day,” and “Ave Maris Stella” by the contemporary English composer Cecilia McDowall.

The latter bears the dedication “pro pace” (for peace). Mark Mangini, the choral society’s music director, will conduct, with accompaniment by Konstantin Soukhovetski on piano, John-Morgan Bush on French horn, and the South Fork Chamber Ensemble.

Performances will take place at 3 and 5:30 p.m. A holiday reception featuring a carol sing-along, food and wine, and a silent auction to benefit the choral society will be held at Queen of the Most Holy Rosary Catholic Church’s parish center in Bridgehampton after the 5:30 concert. Advance tickets are $30, $10 for those 18 and under, or $35 and $15 at the door. Preferred seating is available for $75.

The choral society is an auditioned chorus that performs with professional conductors, orchestras, accompanists, and soloists chosen from among the metropolitan region’s finest opera, oratorio, and musical theater performers. It has brought choral music to the East End since it was founded in 1946 by the late choir director Charlotte Rogers Smith.