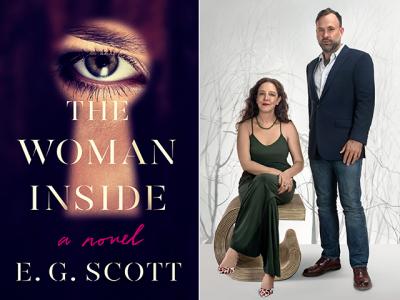 At first blush, E.G. Scott’s new thriller, “The Woman Inside,” seems like the cynical publishing event of the season.

It won’t take long for readers of the novel to discover that its title makes no particular sense, except as a way to conjure the success of other recent blockbusters such as “The Woman in the Window” and “The Woman in Cabin 10.” The name E.G. Scott is in fact a pseudonym for two writers, Elizabeth Keenan and Greg Wands, and is clearly designed to hearken the name A.J. Finn — itself a pseudonym for the “Woman in the Window” writer Daniel Mallory. And if “The Woman Inside” (keeping this all straight?) is written in the alternating voices of a toxic married couple, then that of course is the exact device Gillian Flynn employed in “Gone Girl,” the granddaddy blockbuster of them all.

For some readers, at least, “The Woman Inside” arrives with a bull’s-eye on its cover.

It is perhaps surprising then that in execution “The Woman Inside” is solidly entertaining and finds its own identity in spite of its crass publishing blandishments. The story concerns a married couple, Rebecca and Paul. Each is selfish, self-centered, and lies like a president — they must certainly qualify as two of the more unlikable characters in recent fiction. That is actually a compliment, as the kick of the novel is the nasty mano a mano of this shaky marriage gone rancid. (Readers looking for characters to “root for” can save their money; the novel boasts a very appealing dog named Duff, but the people are all morally noxious.)

The milieu is upper-middle-class Long Island; Rebecca works for Big Pharma while Paul works in real estate. Life is prosperous, but has not always been so; Paul’s building company struggled after the economic meltdown, and Rebecca was left to hold down the fort. Stress and disappointment, we are told, drove the husband into the arms of another woman (I need to remember that one), while the wife became hooked on the prescription pills available at her job.

One afternoon, after a bit of snooping, Rebecca discovers that Paul has a mistress. Furthermore, he has cleaned out the couple’s savings account meant for the dream house they were building in Cold Spring Harbor. Other items include notes that suggest Paul may want to kill his wife.

But hey, Rebecca is no prize either. She’s been fired from her job but tells Paul nothing. Every morning she dresses up and pretends to head out to work, but instead spends her days hunting for pills to fulfill her habit. And, oh yes, she fell in love with Paul when she was his mistress during his first marriage.

About a third of the way into the novel, she herself becomes a murderer.

The novel is told mostly from these two perspectives, each partner giving us his or her version of events (neither seems particularly reliable) and confessing lies. This is Paul in his opening salvo: “My wife and I are different types of liars. It’s one of the interesting things you learn after nearly two decades of marriage. I tend to get creative with the details. She, on the other hand, selectively omits.”

While some might scoff at the idea of a novel having two authors, here it is an asset, as each character in the couple employs a convincing first-person voice (one assumes that Ms. Keenan and Mr. Wands handled their duties with gender specificity, but that is unknown).

The novel flashes forward and back in a time sequence that can sometimes be confusing. But things kick in when Paul’s former mistress, Sheila, goes all “Fatal Attraction” on him (think hammers instead of boiling rabbits). As the plot unfolds there is murder (naturally), mistaken identity, dead body switcheroos, and enough red herrings for a Passover dinner.

The strength of “The Woman Inside” is that it has no particular social conscience — no soul at all, really — but rather is content to wallow in its own decadence. Oh, there is a halfhearted attempt to comment on the evils of Big Pharma, but it doesn’t find much traction here. In fact, these characters are so damaged it’s hard to imagine them coping without their pills. They’re basically drug-sodden, upper-crust trash, sober just long enough to have adulterous congress with their neighbors before running back to their medicine cabinets.

The rich are not like you and me, Scott Fitzgerald once said. “The Woman Inside” suggests he was right. The rich — until they go to jail, OD, or get murdered — have a lot more fun.