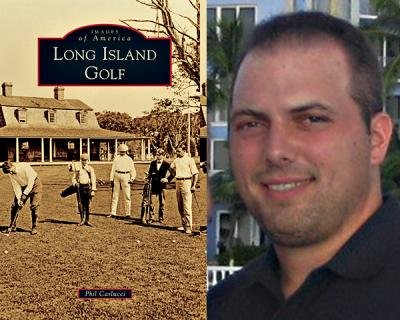 Phil Carlucci
A pleasant outing for golfers, mere fans of the sport, and the history-minded
By
Baylis Greene

Phil Carlucci’s “Long Island Golf” is a pleasant outing for golfers, mere fans of the sport, and the history-minded, offering reminders of the way it used to be — “Sag Harbor’s current course dates to around 1915. For a long time, the course sported sand greens, on which players raked their paths to the cup” — and, more often, the surprising tidbit: “ ‘Harper’s Official Golf Guide’ of 1901 lists nine-hole courses close to one another in Bridgehampton, Sagaponack, and Wainscott.” Bridgehampton’s nine-hole course still exists, of course, but “Sagaponack’s clubhouse later became an Episcopal church” — St. Ann’s, on Main Street in Bridgehampton.

Mr. Carlucci is the man behind the website Golf on Long Island, a remarkably comprehensive guide to the Island’s public courses. “Average score: low 90s,” he writes of himself on the site. “Strength: scrambling. Weakness: poor mechanics.”

Dogged research is another strong suit (he acknowledges the help of “nearly 100 librarians, society members, museum curators, historians, photographers, and writers from across Long Island”), and by way of it he takes the reader on enlightening side trips to courses where the average duffer will never set foot, like the National, overlooking Peconic Bay in Southampton, next door to the grande dame that gets all the ink and glory, Shinnecock Hills.

In a chapter titled “Golf’s Big Boom,” focusing on the 1920s, he writes, “The game changed, however, with the creation of the National Golf Links of America. C.B. Macdonald sized up the state of domestic golf and decided that American golfers needed a true taste of British-style play.” Opening in 1911, “National set a new standard for golf architecture and strategic design.” Described in one newspaper account of the day as “trap-sprinkled, bunker-bedecked,” it is considered, Mr. Carlucci writes, “the earliest example of strategic golf in America.”

More democratically but equally groundbreaking, Bethpage State Park, with its world-renowned Black and nationally acclaimed Red courses designed by A.W. Tillinghast, opened in the 1930s, “the product of a Depression-era public-works project that turned the former Benjamin Yoakum estate into a playground for golfers from all walks of life,” Mr. Carlucci writes. “The average player making an average living could spend a day playing 18 holes, just as a wealthy industrialist with a summer estate could play at one of his clubs.”

“Long Island Golf,” photo-dominated, proceeds chronologically, from Shinnecock, “America’s first incorporated golf club in 1891,” through the war efforts of the 1940s, when “on Shelter Island, the Manhanset course was used to grow lima beans” and the “Amagansett Golf Club sprouted potatoes,” and on to the go-go ’90s and the Tiger Woods craze, which brought with it suddenly extended tee-time waits.

Whether the courses are public or private, the history is sprinkled with eccentricities — take the mogul and castle aficionado Otto Hermann Kahn’s Seth Raynor-designed Oheka course on his 443-acre estate in Cold Spring Harbor, or even relatively humble Indian Island in Riverhead, built circa 1964 where once stood “the world’s largest duck farm,” followed by a “shantytown housing migrant workers.”

And then there’s Montauk, where in one photo we see that a pro-am competitor has landed his biplane on a Montauk Downs fairway in 1929 in his rush to get at the little white ball.

“Nature fashioned the Montauk peninsula in the mold of a gargantuan golf links,” The New York Sun enthused. And thanks to the developer Carl Fisher and the English course designer Capt. H.C. Tippett, the paper went on, “Montauk now boasts of the sportiest eighteen-hole links in the metropolitan region. Nature’s promise has been fulfilled by man.”

That’s golf for you.