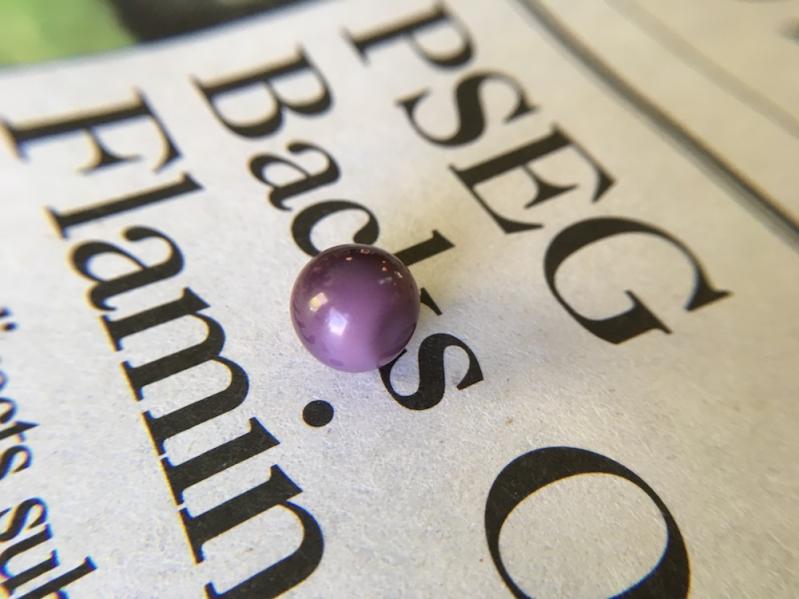 Alex Miller found a pearl the size of a large pea in a clam he had purchased at Stuart's Seafood Market.
David E. Rattray
By Taylor K. Vecsey

Alex Miller was heading home thinking about dinner on the evening of May 14 when he decided to stop at Stuart’s Seafood Market, an Amagansett fa-vorite. He bought some cedar plank salmon and coleslaw. As an afterthought, he said, “Why don’t you give me a dozen littleneck clams — medium-sized little-necks?”

At home in Springs, he shucked them — half the quahogs were from the shell-fish hatchery and the other half from the wild (he could tell by the striped pattern on the shell). On the 11th wild clam, something he thought was a marble fell out.

Almost perfectly round, and purple in color, it rolled around in the sink before he picked it up and realized, “It’s a pearl!”

Such a find is rare, and most likely valuable, according to Barley Dunne, the director of the East Hampton Town Shellfish Hatchery. “It is amazing. It’s pretty rare for any of our shellfish to produce pearls, let alone ones that are relatively round — then add to that it’s a wampum purple,” he said after looking at pictures. Mr. Miller knew to go right to him, as he was one of the first participants in Mr. Dunne’s oyster gardening program.

About the size of a large pea or a small garbanzo bean, the pearl is thought to have come from Accabonac Harbor. Charlotte Sasso at Stuart’s said that day’s clams were from Accabonac, dug by a well-known Bonac family.

Cultured pearls that are relatively round are rare, as they often come up in teardrop or odd shapes, but wild, uncul-tured pearls found in a clam are even rarer, Mr. Dunne said.

He thinks the clam pearl could fetch a pretty penny. “It’s gorgeous. I’m not a jeweler, but it’s a gorgeous purple gem,” he said. “At the very least, his wife is go-ing to have a beautiful necklace.”

Mr. Dunne would know. He started his career in pearl culture at a research pearl-oyster farm in the Solomon Islands in the South Pacific as part of the Peace Corps.

Natural pearls form when some sort of foreign object, an irritant, gets inside the mollusk — usually a parasite, and not a grain of sand, as is often thought, Mr. Dunne said. To defend itself against the foreign body, it emits a fluid that coats the irritant. Known as the nacre, it creates the pearl in a process akin to how scabs form on people, he said.

For this pearl to be purple, it had to be coated with the portion of the clam’s nacre that is purple, unusual since the majority of the inside of the shell is white. “If it was white, it would be kind of drab,” he said. “This is a beauty.”

So what will Mr. Miller do with his rare find? He plans to take it to a jeweler and will likely sell it if it is indeed of val-ue. Mr. Dunne said often these types of pearls go to auction.

“It pays to eat fresh shellfish,” Mr. Miller said with a laugh.