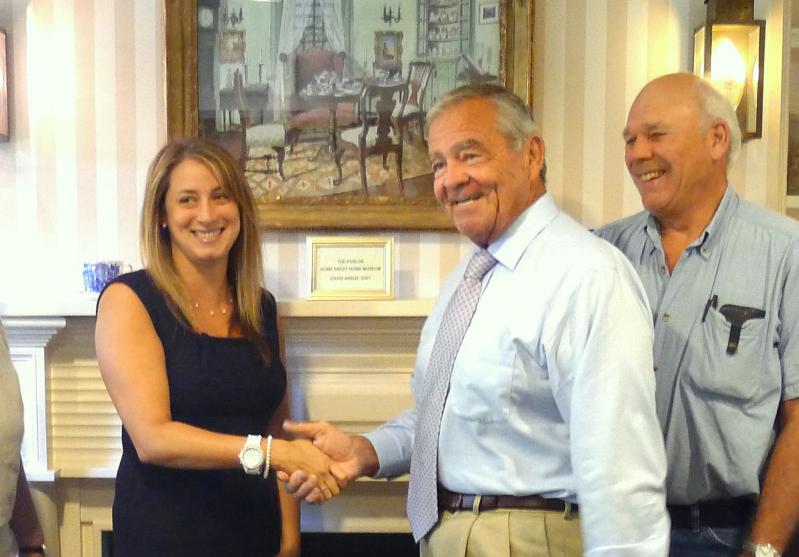 Becky Molinaro Hansen on the day of her appointment in 2013, with then-Mayor Paul F. Rickenbach Jr., center, and Bruce Siska, a former village trustee.
Christopher Walsh
By Jamie Bufalino

Becky Molinaro Hansen, the East Hampton Village administrator for the past seven years, announced on Thursday that she will be leaving the position to serve as East Hampton Town's deputy budget officer.

Ms. Hansen's last day in village government will be Friday, and a resolution to appoint Marcos Baladron as her replacement is on the agenda for Friday's village board meeting. Mr. Baladron, the owner of a management consulting company, served as campaign manager and treasurer for East Hampton Village's newly elected mayor, Jerry Larsen.

The East Hampton Town Board approved the hiring of Ms. Hansen at a meeting on Thursday, and, soon after, she sent out an email to inform colleagues and friends of her departure. "I have enjoyed my tenure with the village and wish to thank those whose support and cooperation over the last seven years has been invaluable to me," she wrote.

In her new position she will help oversee the town's budget, a job that includes managing everything from capital projects to employee benefits, she said in an interview with The Star. She accepted the position because "it offers an opportunity to move to a higher level of government," noting that the town's budget is four times the size of the village's, and its work force and population is much larger.

The main thing she'll miss about working for the village, she said, is "my amazing staff who really care about their work. I know it's a cliche but it's true. The village is a special place to work."

The village administrator job is not an easy one, she said, and requires excellent time management skills and the ability to prioritize. "You've got your finger on the pulse of just about everything in the village, and it's a very active village."

A thorough understanding of municipal law and finance is also key. When you're tasked with managing the village budget, "it's not $24 million of your personal money, it's the money of the 2,000 village residents; that's important to keep in mind," she said.

Because municipal officials such as village administrators are focused on finding ways to fix problems residents encounter in everyday life such as potholes and burnt-out street lights, she said, "Your impact is so much more tangible to people" than that of state or federal officials.