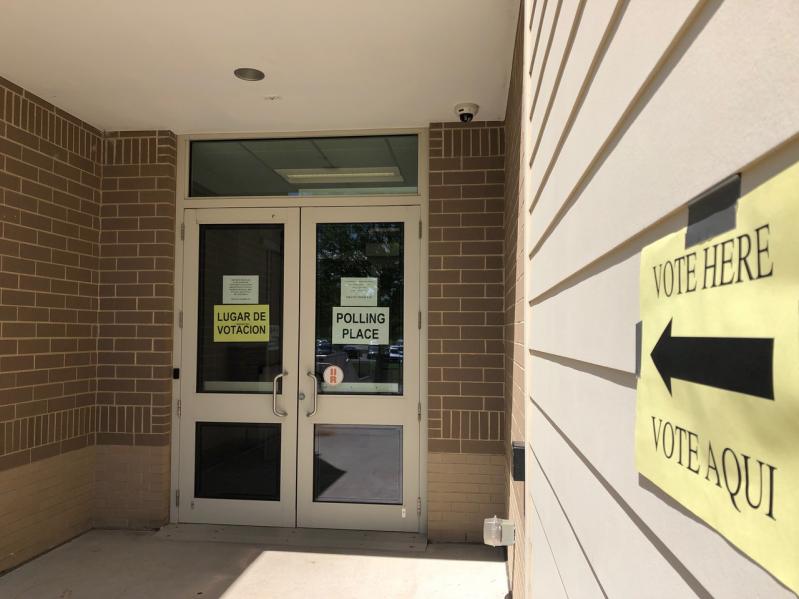 The East Hampton School Board is taking steps to move Election Day polling out of its school buildings.
Carissa Katz
By Christine Sampson

East End school superintendents will meet on Sept. 18 to discuss, among other things, sending a joint letter to the Suffolk County Board of Elections demanding that it stop using schools as polling sites. On Tuesday, however, the East Hampton School Board urged Richard Burns, East Hampton’s superintendent, to call upon his peers to meet sooner, giving the Board of Elections more time to act upon the demand.

The effort is the latest in East Hampton’s efforts to secure its buildings more tightly, protecting students from potential harm.

“The taxpayers are paying for school security, and we’re inviting strangers into our schools” on Election Day, said Jackie Lowey, a board member. “It’s just outrageous.”

In June, for the local and state primary vote, the East Hampton School District and the Board of Elections worked together to minimize the impact of polling on the fifth-grade moving-up ceremony, which had been scheduled long in advance of the state’s decision to consolidate primaries on the same day. Instead of being held in the John M. Marshall Elementary School gym, voting took place in a room at the opposite end of the building.

Board members on Tuesday thought that solution had been agreed upon for the future, too, but Kerri Stevens, the district clerk, said that was not the case. Polling in the John Marshall gym “still stands unless the [East Hampton] library becomes an option,” she said.

Mr. Burns agreed to draft a letter ahead of the Sept. 18 superintendents’ meeting and circulate it among his peers for their approval.

“It needs to be pushed and publicized. It needs to be fixed,” said Christina DeSanti, the school board vice president. “If they allow us to [change] it, every school is going to be behind us. . . . At some point, they’re going to have to move [polling] out of the schools.”

Election Day is Tuesday, Nov. 5. The  Board of Elections could not be reached for comment yesterday, nor could Dennis Fabiszak, director of the East Hampton Library.

In other East Hampton School District news, it was announced Tuesday that the district has maintained its AAA credit rating with Moody’s Investors Service. Jerel Cokley, the assistant superintendent for business, said Moody’s gave East Hampton its highest rating based on its “strong wealth and income profile, extensive tax base, robust financial position, and affordable debt burden on taxpayers.”

The top-notch rating, he explained, will save the district money on capital projects, annual tax anticipation notes, and a recently signed contract for solar panel financing. “This credit rating helps appeal to those prospective bidders,” Mr. Cokley said.

Also, John Ryan Sr., a longtime school board member, told the administration and his fellow board members that he wants the district to support its staff members who have long commutes; for instance by looking into day care for the young parents among the faculty. He went so far as to suggest the district build housing for its employees, as farmers used to do for theirs.