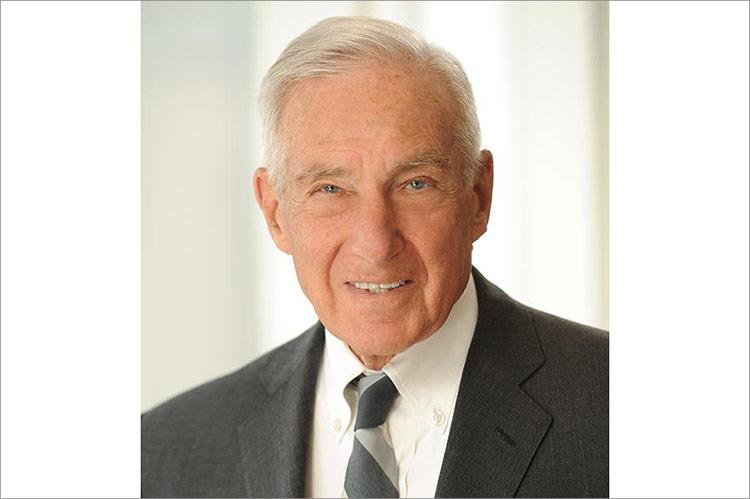 Kenneth J. Bialkin, one of the leading corporate lawyers of his generation and the chairman of the Conference of Presidents of Major American Jewish Organizations from 1984 to 1986, during which time the conference was instrumental in winning freedom for Soviet Jews before the collapse of the Iron Curtain, died of a stroke on Aug. 23 in Manhattan. The longtime East Hampton resident was 89.

Mr. Bialkin, a trustee of the Jewish Center of the Hamptons for many years, was active in Jewish causes and philanthropies for much of his long life. He was 30 when he and his wife, the former Ann Elizabeth Eskind, first visited Israel, and his support for the new nation never wavered thereafter. He was chairman of the Anti-Defamation League, president of the Jewish Community Relations Council of New York, chairman emeritus of the America-Israel Friendship League, vice chairman of the Jerusalem Foundation, and a board member of the Republican Jewish Coalition.

At the Jewish Center, he put together a panel discussion at which distinguished scholars from all over the world debated aspects of Middle Eastern politics. “He had an extraordinary commitment to Jews across the globe,” said Diane Wiener, the center’s director of development. Several months before his death the center decided to name the annual event in his honor. This year’s panel took place two days after he died; his family wanted it to go on as always. Rabbi Joshua Franklin delivered a tribute to him before the panel began; funeral services were held the day after.

As a lawyer at Willkie Farr and Gallagher, and later as a partner at Skadden, Arps, Slate, Meagher, and Flom, Mr. Bialkin’s practice was focused on corporate and securities law. He was instrumental in many important mergers, acquisitions, and securities cases. He represented the Travelers Group insurance company during its 1998 merger with Citicorp bank, which The New York Times at the time called the largest corporate combination ever.

He was born on Sept. 9, 1929, in the Bronx, to the former Lillian Kastner and Samuel Bialkin, immigrants from Eastern Europe, and graduated from Christopher Columbus High School in the Bronx before heading to the Midwest to earn a bachelor’s degree in economics at the University of Michigan. He later received a law degree from Harvard.

In 1956, he and his wife were married; she survives him. He is also survived by two daughters, Lisa Bialkin of New York and Water Mill and Johanna Bialkin of San Francisco and Water Mill, as well as two grandsons.